Before we tackle the results, let’s quickly review our basic notebook testing methodology. The first step in preparing the notebook is to completely wipe the factory OS and install our own (Vista Home Premium 64-bit). This is to prevent pre-installed applications from skewing our performance results. We then use the included DVD-ROM to install all of the necessary drivers. Also, Windows Search Indexing and a few other Windows services are manually disabled, to further help with producing accurate and repeatable results.

Once the machine is prepared for benchmarking, it’s shut down and set on a flat surface with plenty of room for airflow until it’s completely cooled down. Once benchmarking gets underway, the machine is boot and left to sit idle at the Windows desktop for five minutes, at which point testing begins. Each test is run through twice, with a reboot taking place in between each run.

Because we recently revamped our notebook testing methodology, we have a general lack of comparative results. This will improve over time, however, and where we are able to compare with at least one other notebook, we will.

Let’s start things off with a look at our SYSmark 2007 Preview results. For those unfamiliar, SYSmark is essentially one huge macro which utilizes numerous popular applications found on desktops and workstations, such as Adobe Photoshop, Sony Acid, Autodesk 3ds Max, and so forth. The suite is split into four different sections, including E-Learning and VideoCreation, with scores being awarded after the full suite iteration.

SYSmark tabulates scores based on how fast the given hardware was able to complete various tasks, and because the test emulates multi-tasking scenarios quite heavily, a fast processor and lots of RAM is required to achieve impressive results. 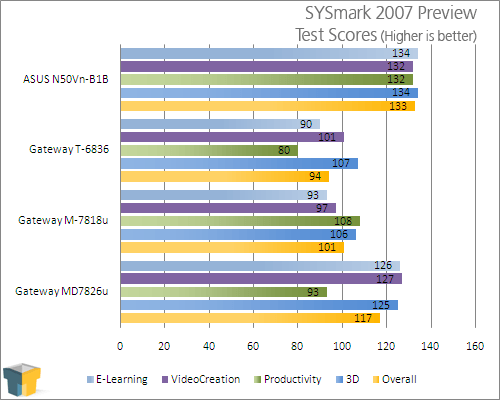 As mentioned on the second page of this article, Gateway’s MD7826u compares quite well to ASUS’ N50Vn-1B1 in terms of hardware, but the faster hardware of the latter helped it pull ahead by a few points in some tests, and especially in the productivity test. Now to take a look at the other test results, with comparative results of the aforementioned ASUS model.

Let’s take a look first at our PCMark results. These seem to scale quite well with the ASUS notebook once again, although it does seem to fall well behind in some tests, especially the HDD test. Note that this notebook uses the exact same model hard drive, so these differences are a little strange. The next oddity comes with the HD Tune Pro test. We saw the same speeds overall, but on the Gateway, the burst speed was much lower, and CPU usage much higher (20% with the SSD!).

In the rest of the performance tests, the faster CPU of the ASUS notebook helped it achieve a great lead, but I’m starting to suspect that something is strange with the storage controller on the Gateway, because the slight difference in CPU speed (7.6%) shouldn’t make that much of a difference.

But while that’s kind of a downer, the battery-life tests help make up for it. The differences here between the ASUS and the Gateway are once again notable, but this time it works out to Gateway’s favor. Not only was the eBook test improved, but even the DVD Movie test! Once again I’m confused, since both notebooks are quite similar, but it could be that the ATI GPU is far more efficient than the NVIDIA on the ASUS, where power draw is concerned.

Because this notebook contains a graphics card suitable for gaming, we’ve put it through five current games to see just how far we could push the detail settings, while still retaining smooth gameplay. Testing a notebook for gaming potential is unlike our regular graphics card content, however. On a notebook, it’s easier to get away with a lower FPS, and still retain good control over your game. So while some of our results below may appear “unplayable”, we can assure you that they were.

To find an ideal setting, we took each game and tweaked each and every setting until we hit a “sweet spot”… a configuration that would allow us to play the game without much lag. This of course would include the ability to have good control over your weapon in an FPS title. If we found it to be too difficult to have precise control, we decreased the settings.

Screenshots and FPS results were captured with Fraps 2.9.8. Although we don’t benchmark these games in the typical manner, you can get an idea of performance by looking at the top-right corner in each shot. We need to stress though, that while some reported FPS is rather low, each and every game here was completely playable.

Well, I admit I expected a lot more from this notebook for gaming than what I saw. The HD 3650 moniker for the GPU is kind of mis-leading, because it assumes it’s a mid-range card, but in all reality, it felt like a low-end card in all regards. Thanks to the lacking performance, we couldn’t run Call of Duty: World at War at the display’s native resolution, even with the lowest graphics settings possible. Shifting that down to 1024×768 made all the difference in the world though.

Oddly enough, the game to run the best was Crysis, using the Minimum profile at the native resolution of 1366×768. I was really surprised by how well it played, and despite how it looks in the screenshot above, it looks better on the notebook itself. It’s much easier to spot imperfections with a bright high-resolution monitor. In second place for performance would have to be Left 4 Dead.. it played like a relative dream at the native resolution and medium detail settings.

Need for Speed had to be kept to 1024×768, like Call of Duty, but that’s because the monitor’s resolution isn’t supported in the game. Even still though, at 1024×768, we had to decrease the graphical detail a great detail, and this is one game where it actually did look flat and boring. Really not a good experience, but if you’re in a bind, it’s not going to kill your buzz for gaming.