In late March, Gateway released three brand-new notebook lines, the MC, MD and UC (creative, huh?), and each had a specific reason to exist. The MC had the goal of offering a robust multi-media experience without breaking the bank, while the MD had a similar goal, but cut corners where able to bring the price even lower (such as downgrading the edge-to-edge glass of the MC).

Then there was the UC, a 13.3″ model that promised a perfect blend of both mobile features and sleek design, all wrapped into a 5.2 lbs package. For some reason, I tend to dislike a lot of things the first time I read about them in a press release or view images, and in the case of the UC, I didn’t at all like the bizarre touchpad (it’s round, not square), but like most times, my opinion changed quick once I got my hands on it.

Before we jump into the review, I’m going to explain that it’s a little odd for us to post a review of this particular notebook now. Although the UC series came out in late March, it seems to have already be discontinued, and I’m not quite sure why. To be fair, I’ve had the notebook for about 45 days, and I’m sure when it was sent, Gateway themselves didn’t know the line’s fate.

There are two reasons why I’m choosing to post this review anyway. The first is that after having used for for a few weeks, it’s a little disappointing that the model has been discontinued, because it’s quite nice. If anything is at fault, I’d say it would have to do with the fact that Gateway currently has over 10 other lines, so they obviously want to consolidate a little bit (and they should, given it’s so confusing).

The main reason for posting, though, is that at launch, the price for this notebook was $800, but now, it’s $600 at all stores I’ve checked. So although it has seemingly been discontinued, the price makes it very worthy of consideration. After all, you still get a full warranty, so there’s little risk.

Because this notebook model has been discontinued, I haven’t run it through the regular gamut of testing that I usually do. Another reason for that is that we’ll soon be doing a rather significant overhaul on our testing methods and test suite, so I’d rather not continue testing in the same manner we have been since I do feel we have some room for improvement. So like our previous few notebook reviews, I’ll rather be looking at this from a features and usage perspective, not touch on the raw performance. 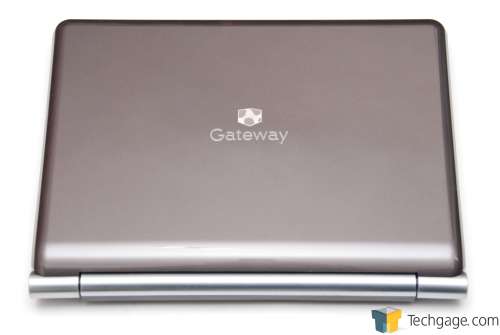 The UC7807u comes in one color, “moonstone”, which is a shade of brown. In some light, though, it looks more like a gray, but either way, it’s one of the nicer notebook colors around. The first thing I noticed about the notebook is that it’s very, very sturdy and it feels well-built. When closed, it feels almost like a tank, despite weighing only 5.2 lbs. I still wouldn’t throw it at a wall and hope for the best, but it does seem to have a nice durability factor.

After opening the lid, you’ll be treated to the view of a very clean notebook face. The keyboard is absolutely flat, while the rest of the area is finished with a brushed look. The touchpad as mentioned before is round, not square as has become the standard. While I didn’t much care for this at first, once I was able to use it, and see it implemented, I don’t mind it at all. 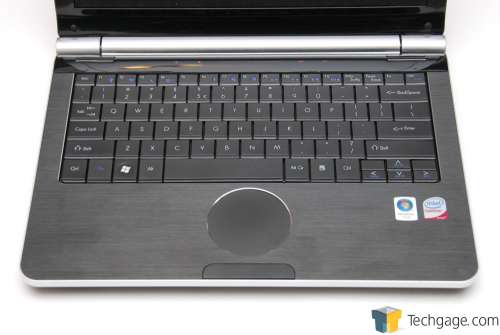 To continue with the clean design, the left and right “mouse” buttons are found right below in a single-button format. The button’s location and size isn’t going to be convenient in some cases, because depending on how you’re sitting, you may have to reach your hand a little too oddly in order to hit it reliably. I rarely ran into an issue personally, but I do feel the button should have been just a wee bit larger. 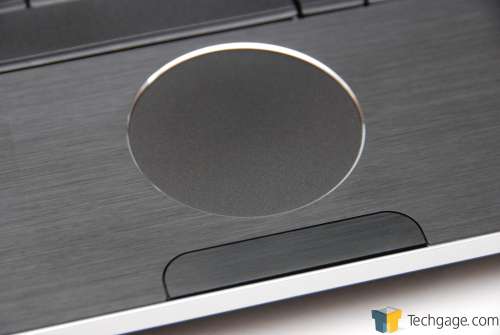 The keyboard is as flat as they come, with uniquely-styled keys that again adds to the overall aesthetic value of the UC7807u. Gateway opted for a full-size keyboard here, and as a result, there’s no Numpad. Whether or not this is a huge downside or not will depend on your personal preference. 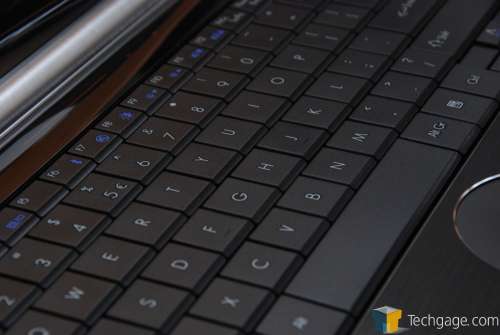 At the top of the notebook are rather unique-looking touch buttons. Although touch buttons aren’t rare anymore, this one is a little different than most. When the notebook is turned off, it looks a little like they are turned on (they’re not), but when turned on, they glow. The buttons on each side of the center line explain themselves, but the middle is, not surprisingly, the volume. It has eight stages of volume control, so if you tap the left-most section, the volume will go very, very low, but if you hit the end, it will top out. This bar cannot control the mute function. Rather, that can be toggled with the Fn key. 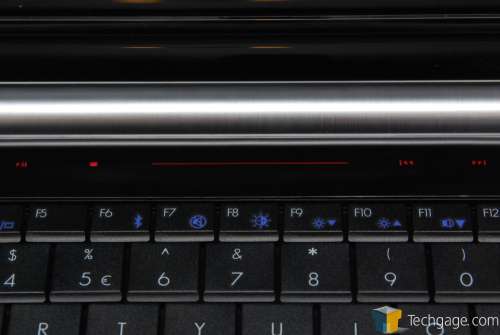 For what can be considered an affordable notebook (especially now), the UC offers a fair amount of connectivity options. On the left side, you can see the LAN port at the back, followed by a large vent. Then we have HDMI and VGA ports, a USB and then the audio connectors. 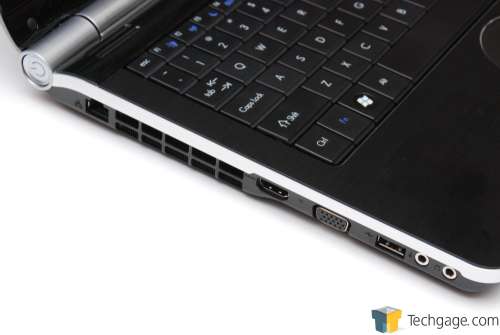 On the right side, the slot-loading DVD drive is found towards the front, followed by another two USB ports, an ExpressCard slot, the AC power port and also a Kensington security lock. For those needing the memory card slot, it can be found in the front left-hand side, pretty much hidden from normal view. There are no connectivity options found at the back. 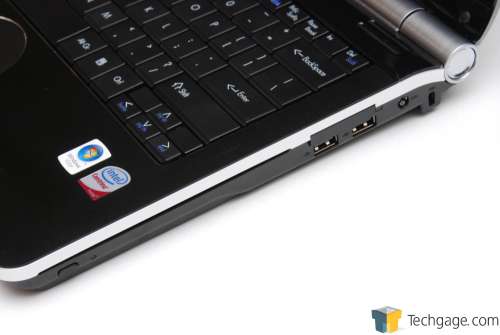 During a meeting with Gateway a few years ago, one concern I brought up on the notebook I was using at the time (non-Gateway), was that the company decided to put the power button on the end of the notebook, rather than in a spot where it won’t accidentally get pushed during travel (a problem I had with the aforementioned model). They agreed it was a foolish idea to put it there, but apparently not enough, since they did the exact same thing just a few years later with this model! 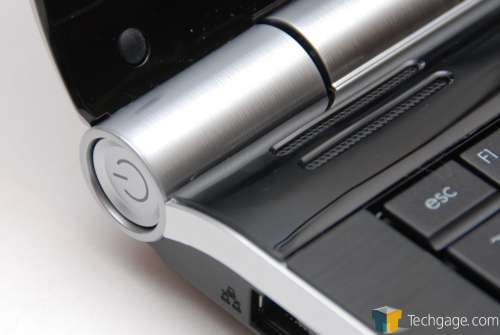 Gateway’s implementation of this is far better, though, because it’s receded a bit into the chassis. I still wouldn’t toss the notebook in a bag with this button at the bottom, though, because if you place it on top of anything, even a pen or pencil (or any other “debris” in there), it may still turn on.

One absolutely common feature of all notebooks today is a webcam, and the one found here is rather typical of what you’d expect to see on really any notebook. It offers a 1.3 megapixel resolution, and of course, a microphone for chatting capabilities. 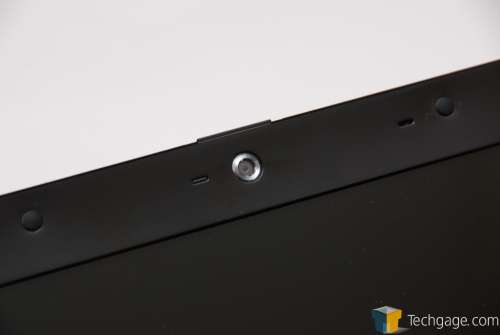 The bottom of the UC7807u isn’t that clean, and it looks a little bumpy. Thanks to raised feet, though, it will still lie flat on a table or desk. Many vents are found all over the notebook in order to aide in proper airflow. 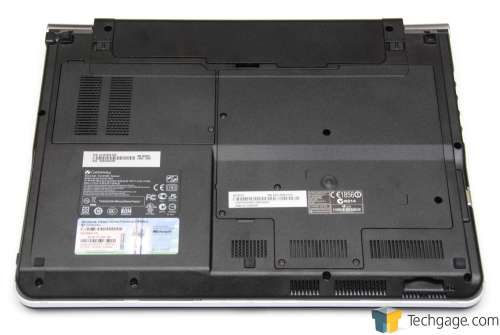 The first time I saw this notebook in photos, there was a lot I didn’t like, but once again, my mind was changed when I finally got my grubby hands on it. I really need to learn to stop jumping to conclusions so quickly! That all aside, I love the design of the notebook, but there are a few minor caveats, all of which I will touch on later.

For now, let’s move onto a look at both the technical specifications of the UC7807u, and also the software bundle.