We took a look at 1080p and 1440p gaming across a wide range of current-gen GPUs a few weeks ago, and now, we’re going to dive back in, but with a focus on 4K and ultrawide (3440×1440). With ten games in-hand, we’re going to explore which cards will deliver the kind of performance you’re looking for with either of these grueling resolutions. 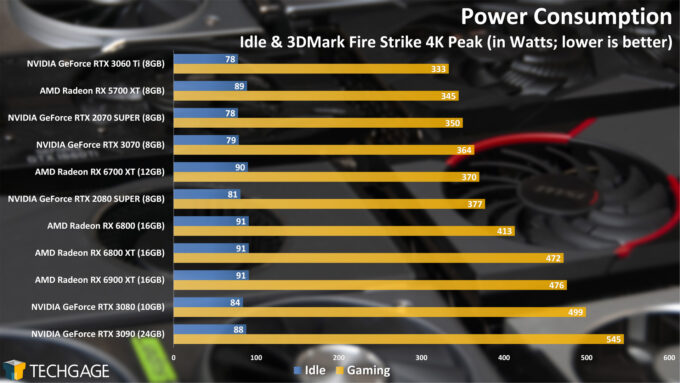 Power consumption results from the current crop of cards is pretty interesting to look at, especially in relation to what we’ve seen from both AMD and NVIDIA in the past. For quite some time, AMD had consistently delivered the more power-hungry cards to market (assuming equal performance), but the current generation changes that up.

NVIDIA’s RTX 3090 simply dwarfs the others in terms of power consumption, with the RTX 3080 sitting directly behind it. AMD’s Radeon RX 6900 XT manages to draw less power than the RTX 3080, despite regularly matching or beating its performance. That said, NVIDIA’s advantage is that its extra power draw can deliver industry-leading ray traced performance, and at least with the Founders Edition cards, NVIDIA will likely run a bit cooler despite the increased power gluttony.

As much as it was fun to get all of this testing done at these top-end resolutions, the reality is that preparing GPU performance content nowadays is really hard to get inspired about. It’s challenging to the point that we even questioned whether it was worth doing this testing, because if the majority of our readers can’t even secure one of these GPUs, the article simply has limited use.

The current state of the GPU market makes us a bit sick, if we’re honest. We hit-up eBay to sanity check some recent pricing, and every single GPU we looked up was being sold for much higher than SRP, in many cases double – even for previously-owned cards.

While chip shortages are apparent all over the industry, hoarder miners have made the situation even worse. It genuinely feels like half of the GPUs that are making it to people’s hands nowadays are not being used for gaming or creation, but mining. Where’s the fun in that? That’s like buying an exotic sports car and running it on a dynamometer all day instead of actually driving it. 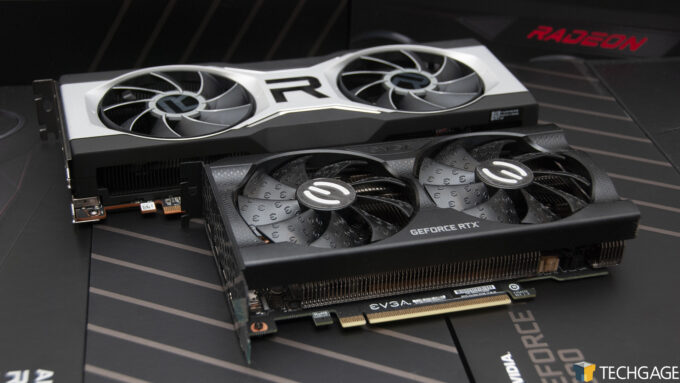 That all said, let’s get back on topic here. As you could see across the many different results on the previous page, whether a GPU is going to be well-suited for either ultrawide or 4K resolution is going to depend largely on the game you’re looking at. Titles like Death Stranding and Destiny 2 don’t require powerhouse GPUs to deliver great performance, but others like Borderlands 3 and Watch Dogs Legion can change things up quite dramatically.

If anyone has been struggling to decide between choosing a 4K or ultrawide for their next monitor, the performance differences between the two resolutions seen across all of these test results should provide a good idea of the performance advantage ultrawide has over 4K.

Whether you like the 16:9 nature of 4K or the wider 21:9 with ultrawide is going to depend on your personal taste, but this author has been obsessed with ultrawide for quite a while, having put at least a thousand gaming hours into the likes of Destiny 2, Apex Legends, Tom Clancy’s The Division 2, and even older titles like Sleeping Dogs. Being able to see more of the game world at all times is something that is hard to beat, and when you get better performance at the same time over 4K, it just makes 3440×1440 all the more alluring. Still, we can get why some may prefer a crisper 16:9 (vs. 1440p) with 4K.

And with that, we pretty much covered all that we can here, so if you do manage to find GPUs in stock, hopefully these test results can help you remain confident in your purchase decision. As mentioned before, we have other performance content in the works, including a look at ray traced titles, and also a look at creator tests. Stay tuned.