Starting out with a stock EVGA Superclocked 8800 GTS 320MB card, it should be mentioned that I enjoyed the look and feel of the stock cooler but as with anything in the enthusiast segment, the shinier, the better. I don’t know if that exactly applies to everyone but it sure as hell seems that way sometimes.

Not content with anything stock, or at least for review purposes, we start out with the Zalman cooler and its memory cooling mate. The first thing we must do is remove the stock cooker and clean off the GPU and all other chips that will be cooled by the Zalman pair.

To remove the residue left by the stock cooler, I use Isopropyl Alcohol. This is readily available at any Wal-Mart or similar stores and has come in handy more time than I can recall. You could spend money on liquids designed to clean just such residue but I have had absolutely no problems at all with the el cheapo brand alcohol. Simply put a bit in a shot glass and get your Q-tips ready. That’s all you need. 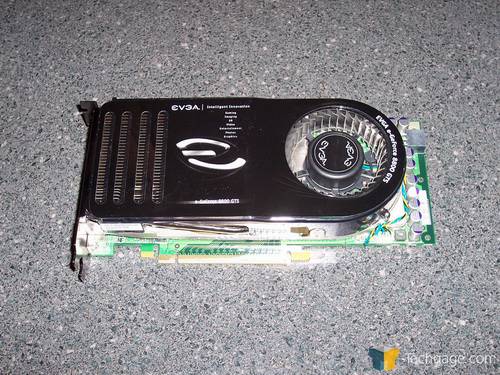 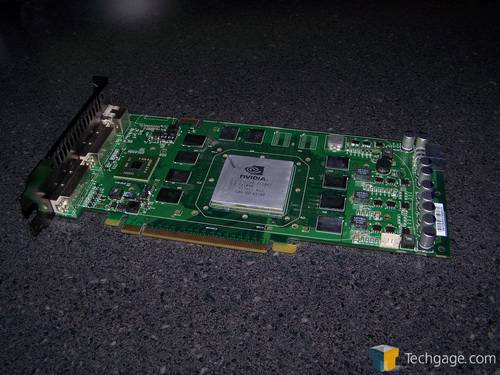 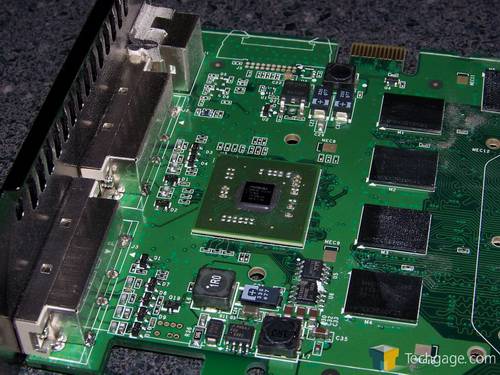 Anyway, for the Zalman, the first thing you will want to do is install the ZM-RHS88 memory cooler onto the card. Remember, and I can’t stress this enough, to remove the plastic backing on the thermal pads. They simply peel off and when removed, you can place the memory cooler on the card, sticking it in place. 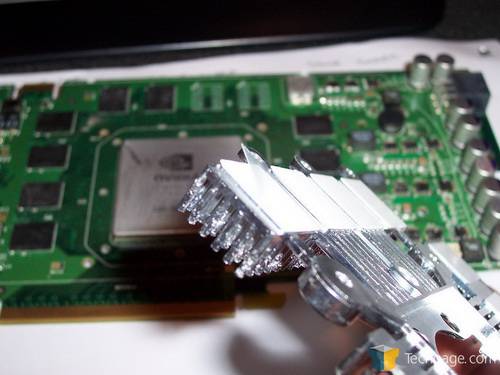 Also remember to apply your favorite thermal paste before you install the memory sink. I learned this after placing the ZM-RHS88 down onto the cardâ€¦ woops. Once everything is in place, you’re ready to install the VF1000. 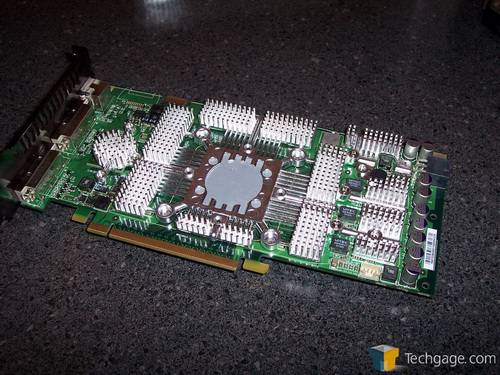 Installation of the cooler itself was quite simple. With the provided posts, all that is needed is to make sure you have them placed in the correct holes. For the 8800 line of cards, the posts go in the outermost holes. When the main cooler is installed, it sits directly above the memory sinks with little clearance to spare. Installation as a whole took less than 20 minutes and that was with me taking pictures along the way so I’d imagine that an undocumented installation could easily be achieved in 15 minutes or less. The overall end product is a great looking one.

The silver memory cooler goes well with the shiny copper finish of the VF1000 itself. One thing to note is that these two cooler add a considerable amount of weight to the card itself so make sure you have them securely anchored with the PCI bracket screw. The weight isn’t of much concern from an overall health of the card perspective, but it does way a significant amount more than the stock cooler. Overall, the installation experience of the Zalman VF1000 and ZM-RHS88 was one of ease and no problems were encountered. Good job Zalman. 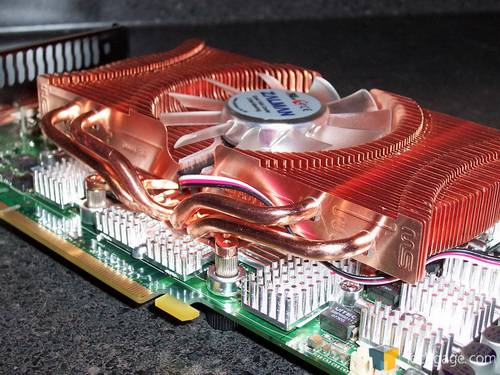 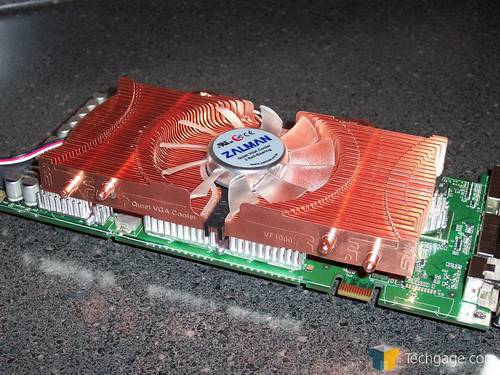 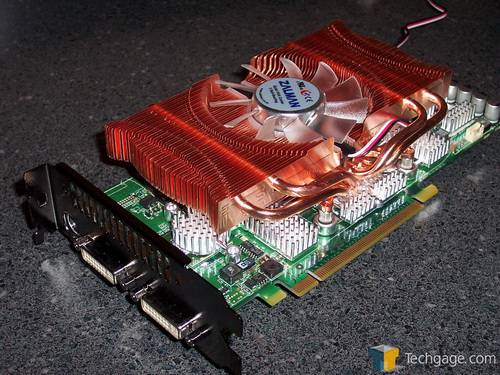 Moving onto the ZEROtherm Hurricane, installation should be as methodical as the Zalman install. Using basically the same approach as its rival, the ZEROtherm lacks the extra memory cooler and instead uses the included RAM sinks. Starting with a blank board, we once again cleaned the chips and started on our way. Placing the sinks on the chips was made easy with the double sided thermal tape already placed on the pieces themselves. The one exception was the chipset cooler which used push pins along with the thermal tape to keep it securely in place. Once on the card, the green sinks that I previously referred to as â€œgod awfulâ€ suddenly look quite nice on the green PCB backed card. With all 15 in place, including the VRMs and chipset, it’s not time to install the cooler itself. 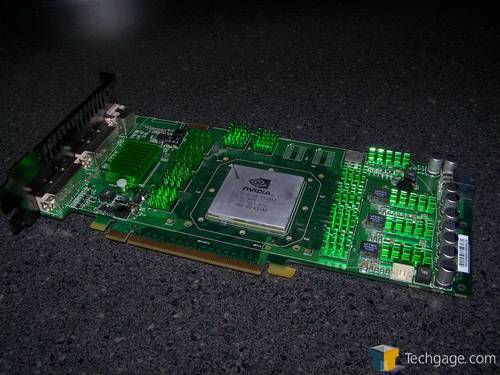 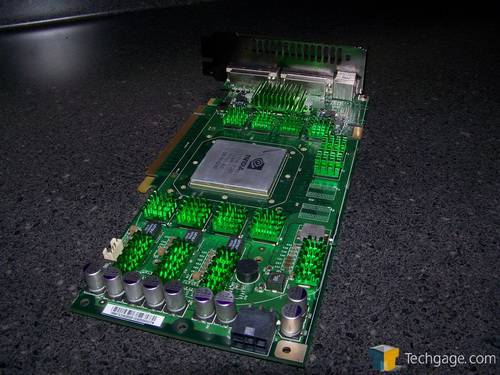 All that is needed to install the Hurricane is to, like the Zalman, is to attach the install posts into the correct holes and run them through the mounting holes on the 8800 itself. Once through, secure them with the provided thumb screws, placing the tension springs between the card and the screws, and you have installed your brand new, semi ugly Hurricane cooler. One thing to note is that the Hurricane will take up 3 PCI slots in your case. This virtually eliminates an SLI setup if you must run both
cards with this cooler. 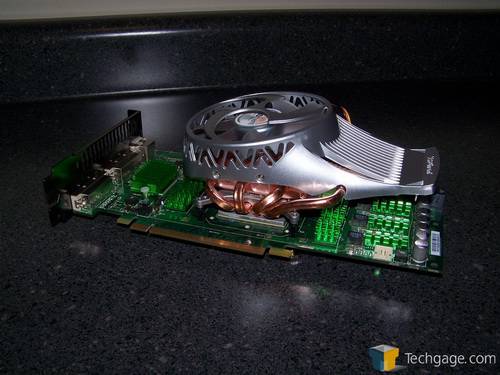 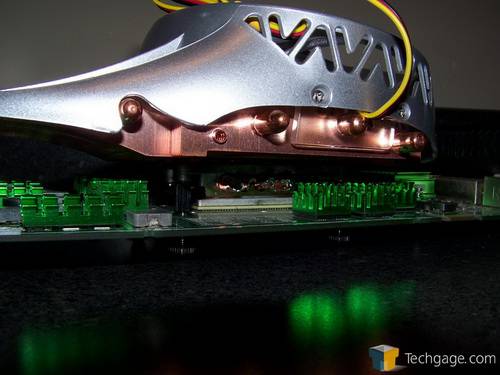