Once the coolers are installed, there really isn’t much to testing the performance of each company’s product. The first thing is to establish a constant set of conditions and once established, we do our best to make sure the testing environment does not change between tests. To push the cards, we used the tried and true GPU stress testing program RTHDRIBL. While this is simply an acronym for real-time high dynamic range image based lighting, any attempt at all to pronounce this will instantly give others the impression that you are drunk so we will simply refer to it as â€œthat GPU stress test.â€

RTHDRIBL is run on each card for a total of 45 minutes on an open bench testing platform. The program is maximized to full screen, giving the testing resolution of 1920×1112 according to the program itself. It should be noted that the ambient room temperature was held at a constant 70 degrees Fahrenheit (plus or minus 1 degree). The hardware used was: 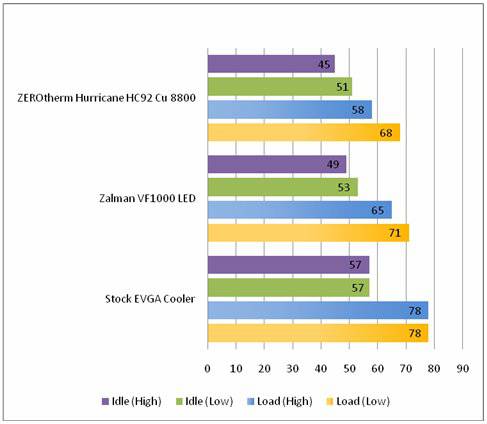 As you can see, the performance of both coolers completely embarrassed the stock cooling option. This is represented by differences as much as 12°C degrees when idle and 10°C degrees when load. It should be noted that fan speed was not controlled though the motherboard but rather through the fan controllers that were included with each cooler. When we note low and high, it is referring to the fan speeds of the coolers. To get to each setting we simply turned the fan controllers either all the way up or all the way down. There isn’t an exact science to this method.

There really isn’t anything to it at all come to think of it. Regardless, we achieved what we were after and while both coolers performed admirably, the top prize for overall cooling performance clearly goes to the ZEROtherm Hurricane. In our testing, the Hurricane bested the Zalman by as much as 4 degrees. While nothing ground breaking, the numbers speak for themselves. Out of the two coolers tested, the ZEROtherm won on all performance related fronts.