by Rob Williams on April 3, 2006 in Miscellaneous

So you think you have fast DDR2? Then you better check out the GeIL PC2-8000 which happens to be the fastest we’ve ever seen, and the benchmarks prove it! It’s also probably the most expensive ‘value’ ram you will set your eyes on, but is it worth the cash for the ultimate performance?

MemTest is not exactly a benchmark per se, but it if you run it after any overclock, it will tell you how much memory bandwidth you are pushing out. This is a great way to immediately see if you have actually increased performance or hurt it before logging back into Windows to do more testing.

This one pretty much speaks for itself.. 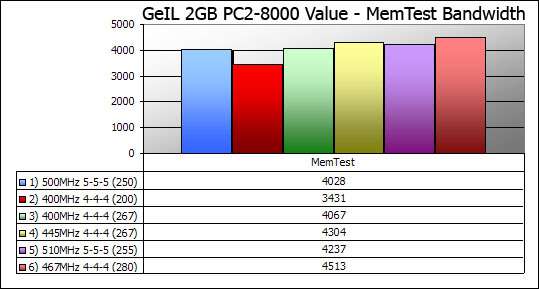 PC Mark has a unique way of benchmarking memory. It will perform four varying tests of Read, Write, Copy and Latency and then spit out a final score based on those results. There are also some 3D Mark 01 scores for your consumption if you enjoy them, but I personally find them to be a waste of time, really.

This memory just keeps setting personal records here. 5,401 is the higher amount of PC Mark’s I have ever scored for the memory side of things. The Corsair PC2-6400 kit I reviewed last week came very close, but the GeIL clearly wants to remain ahead of the pack. 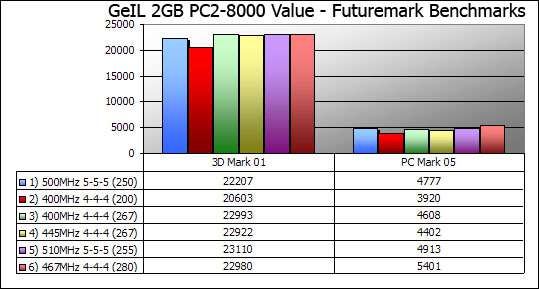 Sciencemark is a program I only recently found out about thanks to a friend [Thanks Mark!]. Like PC Mark, it can do various benchmark tests on the memory and spit out both the bandwidth score and overall Sciencemarks score. The Sciencemarks overall score doesn’t really tell you much, but it’s yet another number you can use to compare your overclocks to.

I have not previously posted any results from Sciencemark before, but I have tested out my other modules to get some comparisons. Again, the only thing to come close to these at Max overclock was the Corsair PC2-6400. They had results of 6293MB/s and 1460.84SM’s and were clocked exactly the same as the best results for the GeIL found below. 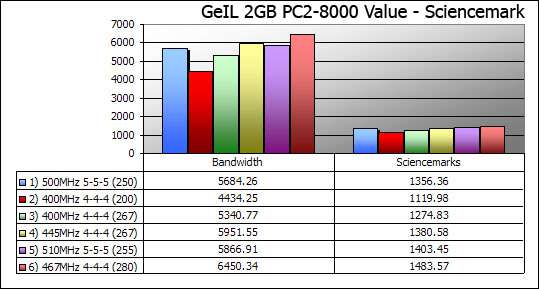 Let’s move right along to our conclusions.