Of all the components we shove into our PCs, the hardest to keep cool is the graphics card. With current models easily able to reach 80°C or higher at full load, purchasing an after-market cooler can be tempting. GELID has just a single GPU cooler model, the Rev. 2 Icy Vision, so let’s see how effective it is against our hot GTX 470.

You know what “they” say. The bigger they are, the harder they fall. What comes up, must come down. The hotter the GPU, the harder it is to cool. Well, I snuck that last one in, but it couldn’t be more true in today’s GPU market, especially when overclocking.

One company trying to help keep things under control is GELID with its Rev. 2 Icy Vision GPU cooler. It has been a while since a GPU cooler has been reviewed so I am really looking forward to the results.

The Rev. 2 supports a wide array of reference cards from both NVIDIA and AMD. With out-of-the-box support for the last four generations of GPUs from NVIDIA, including the new GTX 550 Ti and super-powerful GTX 580, GELID plans to release a VRM cooling kit next month that will allow full compatibility with AMD’s Radeon HD 6950 and HD 6970. As it stands right now, only higher-end AMD Radeon HD 4800, 5800 and 6800 cards are supported. 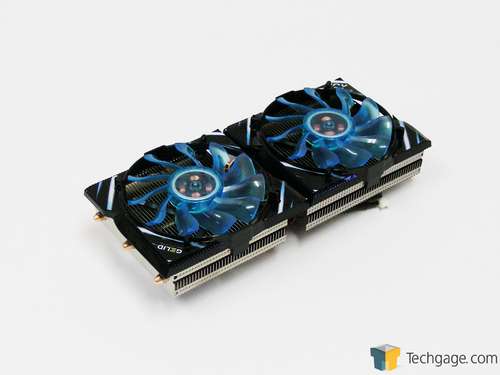 The design of the blades in the dual 92mm UV reactive fans is what grabbed my attention immediately. The specifications claim that the S-design allows for up to 20% more air to be pushed. These fans are attached to plastic brackets that clip onto the aluminum cooling fins for a secure fit. 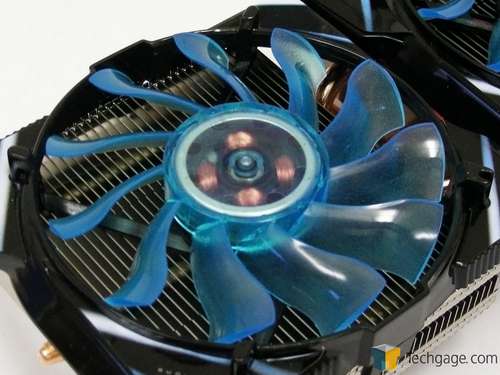 Flipping the cooler over gives a better view of the business end of things; the copper base that directly contacts the GPU processor. The finish on the base is not mirror smooth but it has been well machined with only light marks still visible. Another important fact is that the base is perfectly flat all the way across when checked with a straight edge, so there are no high or low spots that could affect temperatures. Aside from that, the five copper heatpipes can be seen running through the base to the aluminum fins. 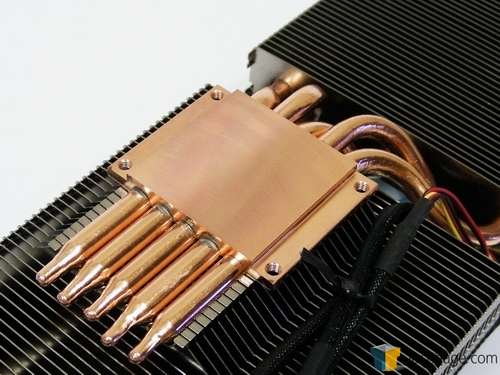 The included hardware reads like a grocery list. There’s a mounting plate, VRM, NVIVO, MOSFET and memory heatsinks, thermal tape, a 3-pin to 4-pin adapter for those who wish to control the speed of the fans using a separate GELID fan controller, screws and risers, washers, GELID’s own GC-Extreme thermal interface material (TIM) and a case badge for those who like to show off what’s under the hood. 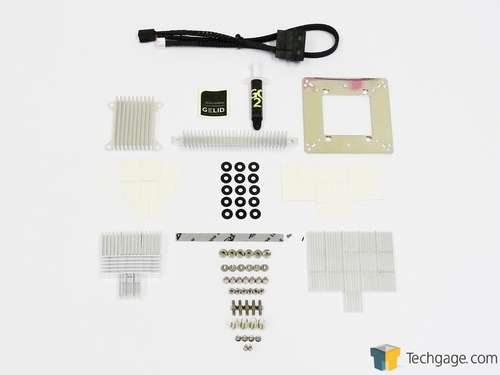 “They” also say that the proof is in the pudding. I don’t know what pudding “they” are eating, but proof sounds delicious. Let’s see how this cooler installs and handles the heat of our test GPU.