It’s hard to believe that it’s been a full six months since 2006.0 was released. Time indeed flies. The regular Gentoo release schedule is one per six months, and with this current release they hit the schedule dead on. This release doesn’t introduce anything major, but there have been many improvements that we will be getting into.

One major component that 2006.0 introduced was the Live CD in addition to the regular install discs. Not only was this a Live CD with GNOME environment, it acted as a base to get the distro installed on your PC. The only downside at the time was the fact that it was available only for the x86 arch, but that’s changed this time around with an AMD64 addition. Future releases, such as 2007.0 may add even more Live CD’s to the mix, most likely for SPARC and PPC first.

The Linux world is moving faster than ever before, and it’s a good thing in most respects. However, it makes the choice of a distro even more difficult, because each new year seems to add 25% more to choose from. Most are derivatives of others, (Ubuntu = Debian, Fedora = RH), so what does Gentoo do to make it worthy of consideration? Since Gentoo is unlike most other distros out there that offer Live CDs and the like, I will briefly explain what makes it unique. 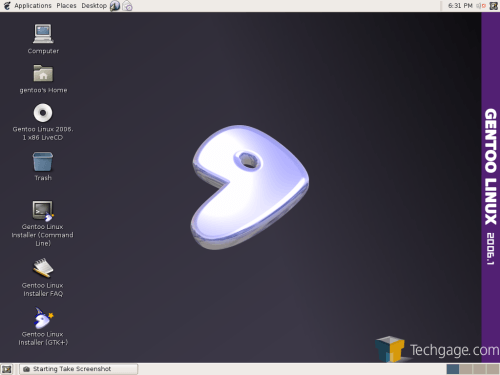 Gentoo is a source based distro, meaning all of the programs you download through the manager are compiled prior to installing. This generally means the end result is a program that’s optimized for your system for better performance. Real world performance gains are debatable, but don’t expect an instant message to send faster because you compiled GAIM. However, it may start up quicker than a binary installed version. In the end, this should not really be a factor weighed into your distro making decision. Unless you drink a -lot- of coffee, you will not likely notice a difference between compile > binary.

Red Hat has yum, Debian has apt-get, Kate has updateos and Gentoo has emerge. Portage is the backend to the magic of emerge and if you have used any of the previously mentioned commands, you will feel right at home. Searching for a program in the repository is as easy as emerge -s programname, and to install you just need to remove the -s.

I make it seem easy, but there is a lot more going on in the background. Inside of your /etc/make.conf, you are able to specify USE flags which are in a sense triggers that tell Portage what to install for a given program. As a quick example, if you emerge xmms without the flac USE flag, the program will not be able to play FLAC audio. If you do have the flag, you can. In the end, it allows you to compile programs with features you want, and none you don’t. This makes Gentoo a completely modular distribution, that’s suited for anyone. 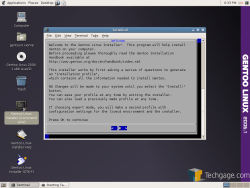 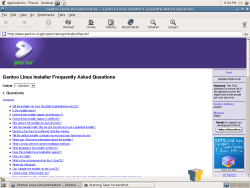 To add a sense of security, many new releases/versions of applications will be masked. This means that Portage will ignore it unless you work around it (easy to do). Generally newer applications can have bugs that will lead to system instabilities, which is why they are primarily released with a mask over their face. In the end, Gentoo is not just for developers or l33t [email protected]$. It’s for anyone who wants complete control over their system.

Before we jump into the updated Live CD, I’ll touch on what’s new or updated. Not surprisingly, this release is meant to improve on everything that 2006.0 offered, and is available for all archs. One major milestone with this release is that for the AMD64, HPPA, x86 and PPC releases, 4.1.1 will be the default gcc version upgraded from 3.4 in the previous release.

As with each new release, there are new 2006.1 specific profile layouts for the Alpha, x86 and AMD64 archs. It’s not mandatory to symlink to these though unless you specifically want to. Continuing to update your system via regular methods will keep you current.

The installer has also been revamped, but looks identical to what we have seen in 2006.0. Most notably, a networkless mode has been added for ultra quick installation of system and GRP packages. One concern with the 2006.0 release was the shady partitioner, but that has also been cleaned up and should offer more ‘smart’ configurations if you have an odd setup. So overall, this release offers quite a few updates rather than new additions. Here is a quick sumup:

Onto the installation procedure!