The installed kernel is 2.6.17-r5 which is based on the official kernel released just a few weeks ago. X is a conservative 7.0, which is the most recent stable version according to Portage. 7.1 is deemed stable on other archs, but not AMD64 and x86 but it’s likely to happen soon. gcc has been updated to 4.1.1 as I mentioned. 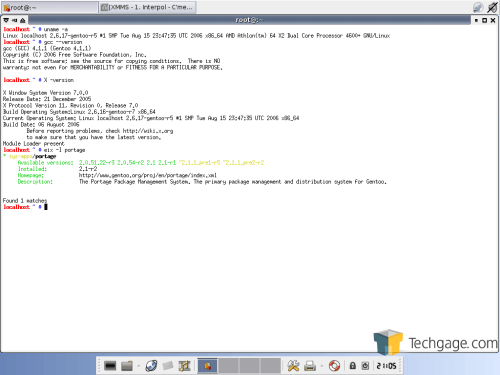 One thing I noticed about 2006.1 is it seems to have better hardware detection, and will auto install the related kernel modules and load them at boot time. For instance, once I got into Xfce, the audio worked right off the bat. I had USB audio hooked up, which I use primarily on that PC and it was working through XMMS without a hitch. You can see below what modules were loaded. I appreciated seeing that over a blank output! 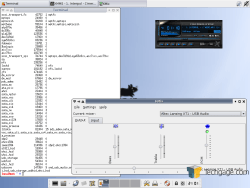 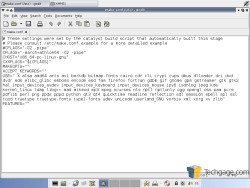 All of the USE flags you will immediately need are there, although I had a few more to add. If you want better video support you will want win32codecs or flac for FLAC audio. To make things easier, there is a complete list of available USE flags on the official site.

Gentoo is a rather unique distro to review because it’s different from others. It’s not a matter of simply installing it and being done with it… that’s only the beginning. It’s up to you to choose your default desktop and customize it, for instance. This all comes back to control, so that it turns out to be your distro. I used Xfce4 in my examples because it’s quick to compile, but I use KDE for my primary desktop usually. Other desktop environments are a simple command away (in addition to the rc.conf and possible rc-update, of course).

To compare 2006.0’s Live CD to 2006.1’s, I like what I see. The installer was upgraded for the better, and allows you to set up a fresh system very quickly. Especially if you wish to install GNOME. Up to date versions of the kernel are installed, alongside the compiler and X.

Improved driver support is welcomed. The fact that my audio worked right out of the box impressed me, because I was not expecting it at all. I don’t recall ALSA even being an installed module after a 2006.0 installation. Add all this to the fact that there is now an AMD64 Live CD, I’d have to admit that this is a great release. Once again, if you are a current Gentoo user, you don’t have to upgrade unless you specifically want to. emerge -uD world will do a good job of updating you to the latest versions of the software, including gcc 4.1.1. If you are re-formatting or want to give Gentoo a try, this is the version to grab.

Kudos to the Gentoo devs for putting out another solid release! I look forward to seeing what 2007.0 brings!