Just over two years ago, we took a look at GIGABYTE’s first keyboard to fall into its “Aivia” gamer line, the K8100. At the time, we were happy with what was delivered, and looked forward to what the future could bring. Now, it’s time to see what’s been accomplished in those two years, with the mechanical “Osmium”.

A few weeks ago, Techgage received a package from GIGABYTE containing not one, but two, products. As you might recall, the Force M9 Ice wireless mouse was the first out of the box (pun intended). We put it through its paces and found that it was a solid product, if a little flawed in some areas.

Today, though, we’ll be looking at the other product: the Aivia Osmium mechanical keyboard. Now, here at Techgage we typically don’t show pictures of product packaging. In the Osmium’s case, however, I thought we’d make an exception since it’s quite slick. And one thing that photographs can never convey is just how heavy this box is! 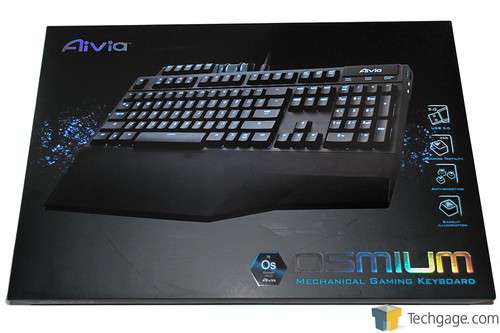 Straight from the Aivia gaming-oriented product line, the Osmium is based on the Cherry MX Red key switch. As such, the keys feature linear travel (hardly any audible click or tactile feedback) and a very light actuation force. There is a sound theory behind the selection of the MX Red key switch type: with less resistance on each key press, gamers can register more inputs with palpably less physical effort. It remains to be seen (or experienced, to be more precise) whether or not the theory plays out in the real world, but at least now you have a good idea why GIGABYTE opted to use the Reds on the Osmium.

(As an aside, in case you want to learn more about the differences between the Cherry MX mechanical key switches (there are four major types – Blue; Brown; Black; and Red – as well as the little-known Clear variant), here is a brief description.)

Let’s have a good look at this keyboard now then, shall we? 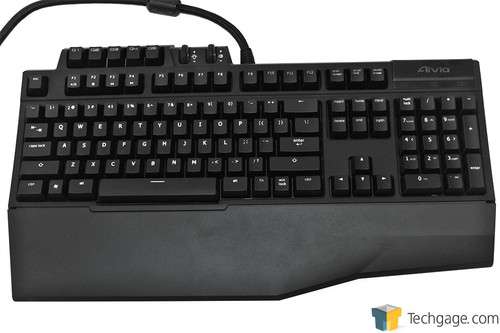 The Osmium is a 110-key keyboard, which makes it slightly unconventional. Typically, a Windows keyboard features 104 keys – so why does the Osmium have six more than the typical? Well, five of the extra keys (designated as G1-G5) are macro keys and reside on the plank’s uppermost row, while the sixth is a nondescript Win Lock (Windows Lock) key situated between the R CTRL and Fn keys. The addition of these six particular keys should key you in to the fact that this is no standard keyboard. 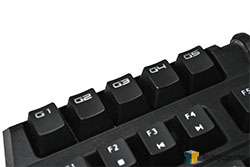 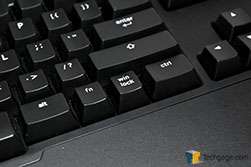 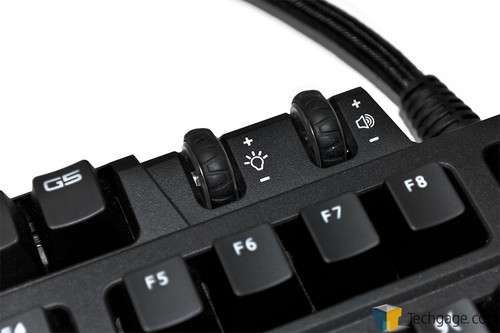 Yep, the Osmium is backlit. While backlighting has been a feature in membrane keyboards forever, it’s relatively rare in the world of mechanical keyboards. For some people, backlighting is an example of unnecessary excess; for others, however, it’s a must-have. With the Osmium, you actually have the best of both worlds. Not only that, but you can also set the intensity of the backlighting to whatever level you desire. 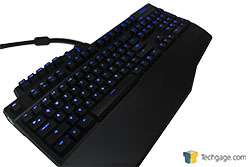 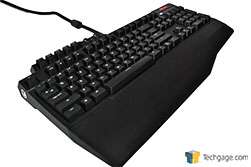 Want even more bling? Well, see the “Aivia” logo glowing above the 10-key number pad? The panel on which that logo sits happens to be the Profile Switch button. Press it to cycle through different user profiles that you set up in the software. As an added feature, you can associate different user profiles with different LED colors, a handy visual cue that not only is eye-catching but functional as well. 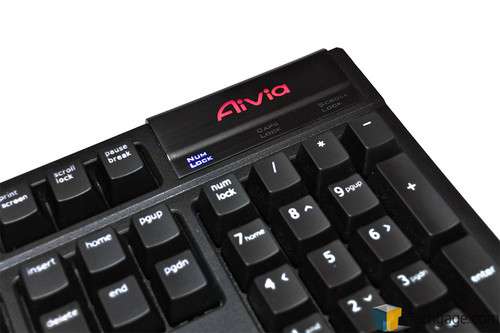 Now, if you’re starting to think the Osmium is all fun and games, well… that’s not quite accurate. There are a few “concessions” to practicality (as if practicality was ever a bad thing). For instance, it features pass-throughs for both mic input and headphone output and a USB 2.0 connector on its right edge. On its rear edge, GIGABYTE was thoughtful enough to include a single USB 3.0 connector, in case you need one and don’t want to reach all the way to wherever your PC has its USB 3.0 connector. The audio pass-throughs and USB connectors (as well as the keyboard’s own inputs) necessitate a four-part cable cluster, with one connector each for USB 2.0 (for the keyboard’s inputs and for USB 2.0 transmissions), USB 3.0, headphone out and microphone in. The cable itself is braided and feels fairly indestructible. 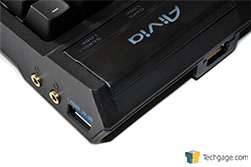 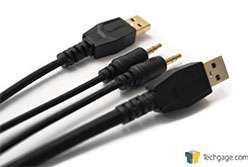 The Osmium features a couple of other such nods to practicality. The most obvious to the eye is the detachable full-width wrist rest. And underneath the keyboard, you have have not one, but two, pairs of rubber feet that can be raised or lowered, making finding the ideal rake for your Osmium easy to find. 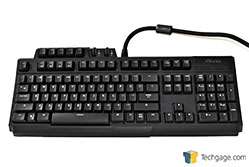 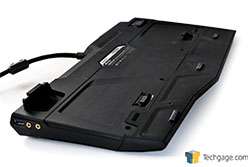 The last thing we’ll look at are a few little extras that GIGABYTE packed into the box. The Osmium comes with four custom keycaps; instead of alphanumeric symbols, these four custom keycaps depict a stylized shield, a lightning bolt, a flame, and the GIGABYTE GHOST logo (the same logo is placed on the Osmium’s left edge). Helpfully, GIGABYTE also included a keycap puller. You can put the custom keycaps anywhere on the keyboard.

Now that we’ve gone over the Osmium’s features, let’s have a good look at its dedicated software package.