I have to imagine that building a board like the G1.Sniper 5 is a lot of fun for a product team. The limits? What limits? Instead of having to start from the top and whittle the feature-set down in order to fit a specific price-point, the G1.Sniper 5 instead includes extras on top of it all. Simply put, this board is packed.

Let me put it another way: The G1.Sniper 5 is a board that’s probably too much for you, and that’s what makes it so great. It offers features you might not necessarily need right now, but you might grow into later. And likewise, it could offer features you don’t even know you want. Take the advanced audio solution, for example.

Let’s start from the top.

This board’s major features include the Killer Ethernet (something I don’t care much about; I’d opt for the Intel NIC – you might see things differently), a robust audio solution that features a headphone amplifier and replaceable OPAMPs, 10x SATA 6Gbps ports, 6x USB 3.0 ports at the back, 2x HDMI (one could be used for an external amp), and a great-looking / feature-rich EFI and software package (in the form of EasyTune). 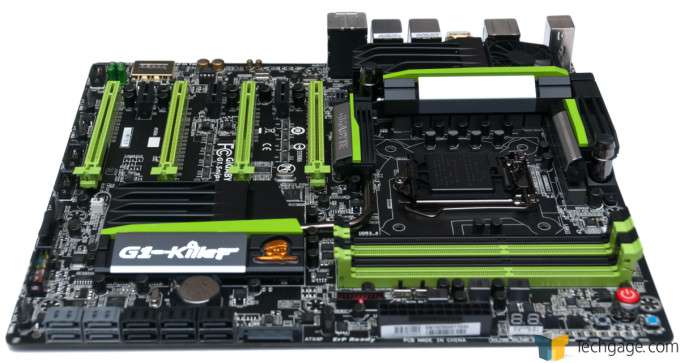 In the end, there’s little to nit-pick about here, though as I mentioned on page two, I would have liked to see the PCIe configuration changed a wee bit, so as to keep an x1 slot available should all four of the x16 slots be occupied. That said, for that to be possible, the board’s vertical dimensions would likely have to be increased; this design choice would then consequently restrict chassis support. From this perspective, I can see GIGABYTE’s reasoning, but it’s something to be aware of.

While I don’t expect it to be a widely used feature, one perk worth mentioning again is the ability to water cool the top heatsink. I’m too lazy to pursue a proper water cooling setup myself, but I’ve always appreciated this feature because keeping your PC cooler = an obviously good thing.

As major as audio is on this board, it’s unfortunate that I didn’t (and cannot) tackle it to a great degree. I appreciate good audio, but I am not an audiophile. Still, I can appreciate the lengths GIGABYTE has gone to here to deliver what’s sure to please those who, like me, appreciate clear audio. I’d argue that gold-plated connectors mean little, but it definitely helps to separate the card on the board as GIGABYTE has done, since it can reduce noise significantly.

For those who really want good audio, it goes without saying that a discrete solution is going to be best, but for an all-in-one solution here, GIGABYTE’s done well – this isn’t simply a rebadged onboard chip like some other boards have.

Past the actual hardware, the EFI is fantastic, and the software, not bad at all. I still think GIGABYTE has work to do there on the latter point, but the generational improvement for Z87 has been amazing, and I can’t wait to see what’s next.

While the G1.Sniper 5 is an expensive board – there’s no denying that – it’s built well, has a smart design, nine fan headers (I’m still in relative awe), a Wi-Fi solution for those who need it (which includes Bluetooth), both a Killer and Intel NIC, the most advanced audio solution to be seen on a motherboard to date (as far as I recall – ASUS has come close), and other nice perks that we’ve covered more than once throughout the course of this review.

For those who want as robust a Z87 board as possible, and don’t mind paying that premium, GIGABYTE’s G1.Sniper 5 deserves to be at the top of your consideration list.