NVIDIA has been pretty aggressive with its GPU launches this year. Fall 2018 saw the release of the first three GeForce Turings, branded as RTX cards, with the RTX 2060 releasing alongside CES this January. Since then, we’ve seen the first non-RTX Turing, GTX 1660 Ti, a card that struck us as being a great deal, and a definite thorn in AMD’s side.

NVIDIA apparently didn’t think it was enough to counter the Radeon RX 590 with an equal-priced competitor that performs a lot better. Now, we have the GTX 1660, a $219 USD GPU that again considers the RX 590 its main competitor. Despite the drop from $279 to $219, the 1660 retains the 6GB framebuffer.

Aside from the basics, like core counts, the GTX 1660 differs from the 1660 Ti because it sticks to GDDR5, rather than the newer GDDR6. The change results in a card with lower overall memory bandwidth, an effective drop from 288 GB/s to 192 GB/s. 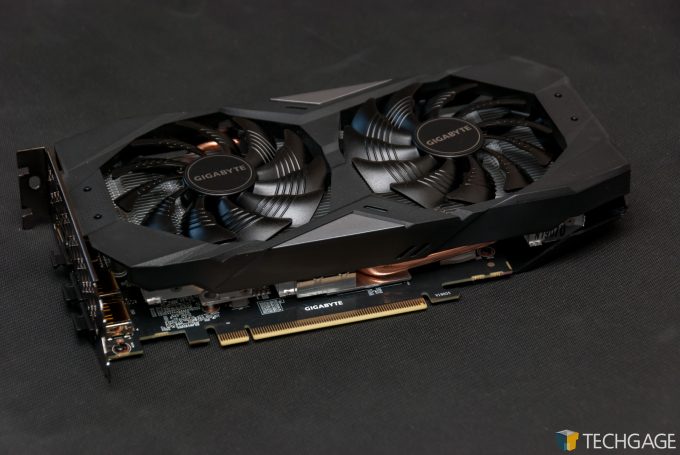 This review comes at a time when we’re working on many other things, and as it’s being written, we’ve already missed embargo, so let’s hop on board the express train to get to some conclusions quicker.

Like the 1660 Ti, NVIDIA didn’t sample the 1660 to reviewers. Instead, its poor partners had to scramble to figure out who cards could be sent out to. GIGABYTE was kind enough to fulfill our request, so a big thanks goes out to our friends there.

Admittedly, we had expected to have a lot more time than we did with the 1660, though it wasn’t as bad as the “less than 24 hours” we had with the 1660 Ti. Usually when that happens, it means market availability might not be so hot out-of-the-gate, but fortunately, availability seems “OK” for the time-being. We see many models at Newegg, but… nothing seems to be available Amazon’s US site yet.

The memory bandwidth might be lower, but the GTX 1660 is an incredibly attractive card in comparison to the Ti, which costs $60 more. The Ti has 9% more cores, with NVIDIA itself saying it’s about 10% faster, based on the FP32 TFLOPS spec.

NVIDIA says that the GTX 1660 is an ideal card for those running a similarly targeted GPU from a few generations ago – eg: GTX 960 or 970. But, looking at the table above, it’s even a notable upgrade over the GTX 1060, by about 1.2 TFLOPS. In reality, the performance gains are likely to be even higher than that boost implies, thanks to Turing’s general optimizations (concurrent FP/INT helps at times). Both GPUs are included in the benchmark results, so we can soon put these assumptions to the test.

A total of eight games are included in our current test suite. Recent additions include Battlefield V, Forza Horizon 4, and Shadow of the Tomb Raider. Beyond these eight titles, UL’s 3DMark and VRMark, as well as Unigine’s Superposition, are used for some quick and dirty tests that you may be able to run at home.

For our apples-to-apples testing, the graphics settings seen above apply to every one of our tested resolutions so as to deliver easily comparable results. In most cases, each configuration is tested twice, with more runs added if the initial results make the extra testing necessary (which isn’t required too often). Note that VSync is disabled at the driver level to prevent games from enabling it without us noticing.