When there’s a noticeable gap of time in between major GPU launches, one thing’s bound to happen: we’re going to see models get released that slot into gaps we didn’t think existed. That’s the case of both AMD’s Radeon HD 7790 and NVIDIA’s GeForce GTX 650 Ti BOOST, which retail for the same price. Let’s check them out.

Every so often, an interesting “fluke” occurs in the graphics card market. One vendor will release a GPU out of nowhere, and its leading competitor will release one mere days later – one that happens to settle itself in at around the same price-point. It’s almost as if these companies work together, isn’t it?

Of course that’s not the case, but it happens often enough that it becomes very clear that both companies have a good idea of what the other is doing. When it comes to the HD 7790 and GTX 650 Ti BOOST, we were contacted by both AMD and NVIDIA within three hours of each other to be briefed. Sometimes, it just feels uncanny.

I mentioned above that sometimes, two just-launched competitor cards can launch “at around the same price-point”, but in this particular case, the price-points are 1:1. The 1GB variant of either the 7790 or 650 Ti BOOST carries an SRP of $150, while the 2GB models add $20. I can’t remember the last time where a launch happened that allowed us to compare two identically-priced products like this. The results will be interesting…

… kind of. Unfortunately, while we received a 2GB version of NVIDIA’s card, we only received a 1GB version of AMD’s, so for this reason, NVIDIA is likely to come ahead in our results. It’s actually pretty bizarre that AMD wouldn’t send us the 2GB variant given that this could happen, but what some of our results may highlight is just how beneficial that extra framebuffer is. Not to mention the difference between a 128-bit (AMD) and 192-bit (NVIDIA) memory bus.

Because these GPUs do in fact compete directly with each other, it seemed to make more sense to review them together than one after another, so that’s what we’ve done. As with any launch, we were given a slew of information surrounding each GPU, such as the ecosystem and targets, but we’re going to try to keep things simple here, only tackling what’s important. 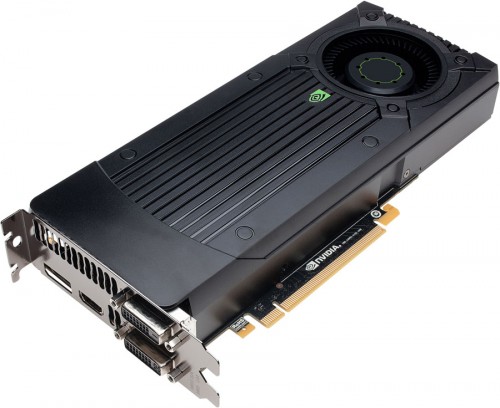 There’s no question about it – this card looks like a monster. But its shroud is kind of misleading. As seen in the above stock shot, the PCB only stretches as far as the edge of the end fan. The end 3 inches or so are dedicated to the leaf-blower fan. While some could argue that this is wasted space, I actually commend NVIDIA for the move. While the BOOST is meant to be an affordable card, it’s not condensed on purpose just to save space – and essentially, increase heat. I love this design. What’s not seen, however, is that because the PCB doesn’t span the entire length of the cooler, the card’s 6-pin power connector plugs in about 4 inches from the right, something some might find a bit unusual (and it kind of is).

NVIDIA’s latest sits comfortably in the middle of the pack – right ahead of the 650 Ti thanks to its higher clock speeds, and marginally behind the 660 due to that card adding 192 cores to the mix. Like AMD, NVIDIA is targeting this card at 1080p gamers, as it’s noted that it’s currently the most popular resolution for gamers (something verified with Steam’s hardware survey).

The “BOOST” in the name signifies a boost to the GPU clock speed, which is bumped from 925MHz to 980MHz. Further, the actual innate boost ability of the GPU is likewise increased, reaching about 1080MHz at stock configuration.

With each one of its mainstream launches, NVIDIA usually touts the advantages that gamers can experience when upgrading to its latest offerings. For the 650 Ti BOOST, the company notes that the card is about 2x as fast as the GTX 550 Ti, and 6.4x faster than the 9600 GT. So, if you have either of those GPUs or something similar, you could expect to see some major gains with this latest card.

Onto AMD’s offering, which comes to us in the form of GIGABYTE’s GV-R779OC-1GD. This is a 1GB model, so it unfortunately won’t allow us to give a true apples-to-apples comparison between the two cards. Plus, it’s overclocked an additional 75MHz on the Core, whereas NVIDIA’s card is stock. For those who’d rather a 2GB option – and I’d recommend it if you appreciate being able to crank up detail levels at 1080p – GIGABYTE also has the GV-R779OC-2GD, priced at $170. In addition to boosting the memory, it also replaces the single large fan with two smaller fans for more efficient cooling. 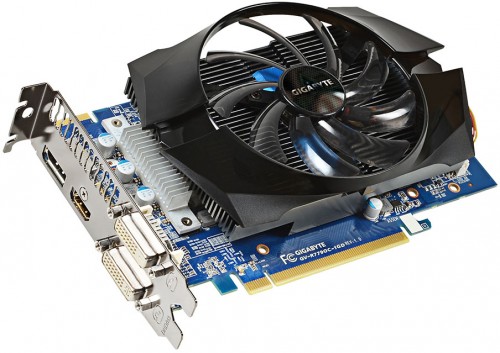 Unlike NVIDIA’s card, which is more of a revision based on the original 650 Ti, AMD’s 7790 uses a brand-new chip design that bundles in 14 compute units. There’s also been a completely redesigned PowerTune mechanism that bumps up the number of power states from 4 to 8, allowing the card to use increasingly optimal voltage levels for a given clock-speed. With this switching capable of happening every 10ms, this does seem to be a highly-efficient design.

Like NVIDIA’s latest, AMD’s sits in the middle of the company’s current line-up. Where the company’s two parts really differ is with the memory bus; NVIDIA equips a 192-bit one ,while AMD retains the 128-bit implementation of the rest of the 7700 line-up. This is a bit unfortunate, as 192-bit would clearly give improved efficiency when dealing with graphics-heavy titles, especially at 1080p.

To AMD’s advantage, it arguably offers the more attractive bundle at the moment. NVIDIA includes $75 worth of in-game value to three separate free-to-play games (Hawken, World of Tanks and Planetside 2), whereas AMD bundles in the blockbuster BioShock Infinite (which we raved about). I personally feel like AMD’s offering is far superior, but if you happen to already play any of the F2P games NVIDIA supports, you may feel different.

More important than the bundles is the performance, so let’s get right to that. After a quick look at our test machine and methodology, of course.