From a performance perspective, we feel that motherboard benchmarking is almost useless. It’s the motherboard’s job to allow all of the installed hardware to operate at its full potential, so in theory, a $100 option shouldn’t be much (or any) slower than a $300 one. The differences in price instead comes down to the quality of the onboard components and other features.

So why do it at all? It’s because it’s important to make sure that the board we’re dealing with doesn’t lack in one particular area versus the rest. If board A performs 2% slower than board B in PCMark, for example, that’s of no concern to us – benchmark variance is a fact of life. However, if one board consistently performs weaker than the rest, that’s worthy of note – it could suggest that weaker components have been used which do not allow the hardware to operate at its full potential.

Please bear this in mind when perusing our results. Just because a board under-performs in a single test, it doesn’t mean anything in regards to its quality as a whole. Our ultimate goal here is to make sure that each board we test performs as we’d expect across the gamut of scenarios we pit them against.

Increasing the BCLK value is one way that vendors could sneak in some higher-than-stock performance numbers, so after letting the test bench sit idle for a couple of minutes, we look at the current BCLK value as according to CPU-Z.

All is kosher. Let’s move on.

To take a look at the “overall” performance of our PC configuration, we rely on dual Futuremark suites: PCMark 8 and 3DMark (2013).

As we’d expect, the variance between these three boards is small, although ASUS’ board does seem to have a slight advantage. With the SPECwpc test in particular, both the ASUS and GIGABYTE boards trade punches.

To properly give the internal SATA 6Gbps and USB 3.0 ports a good workout, we turn to HD Tune and CrystalDiskMark.

I don’t know what ASUS is feeding its SATA chipsets, but for the past couple of motherboard generations, its boards have consistently performed better than the others. Will these small differences be noticeable in the real-world? I certainly wouldn’t think so, but like most of the benchmarks on this page, it’s simply interesting to note.

Where ASUS really shines is with the USB 3.0 test, as on its boards, we have the option to enable the UASP protocol. Why that’s not a standard option on the other boards, I’m not quite sure. Again, though, unless you are copying data all day long, the boosted performance might not be that noticeable. Still, I’d rather faster, if given the option.

Writing files to disk or reading a website doesn’t do much to exercise our CPU, so for that, we turn to a few common scenarios – image editing, video rendering, music conversion, and 3D rendering.

This set of tests highlights an obvious trend. For some reason, EVGA’s board consistently falls behind the other two boards each and every time, whereas the ASUS and GIGABYTE are pretty well neck-and-neck. Great performance all around, but the EVGA trends are hard to ignore.

For memory and CPU testing, we utilize SiSoftware’s Sandra 2015.

Once again, EVGA’s board falls a bit behind here (for reasons unknown), but overall, there’s great performance from all three boards here. While faster memory really isn’t important for most people, I admit it’s still nice to see performance peak at about 50GB/s. To put that into perspective, I hit 9.9GB/s on the last memory kit I reviewed seven-years-ago.

GIGABYTE’s X99-UD4 motherboard hits the “sweet-spot” when it comes to features and pricing. While the board today hovers around the ~$250 mark, it can regularly be found for less. As I write this, Newegg has the board listed for $245, and then offers a $20 mail-in rebate on top of it.

Like the ASUS X99-DELUXE board I took at look at in February, I’ve spent a lot of time with GIGABYTE’s X99-UD4, and overall, I don’t have much to complain about. The board looks good, has a great, common-sense design, and has a decent EFI / software implementation as well. Functionality-wise, it delivers all of what I’d expect an X99 board of this price range to. 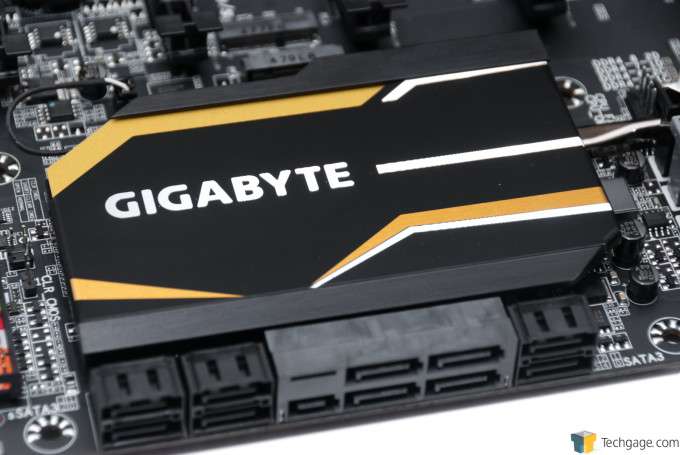 GIGABYTE offers two boards above this one that might be worth considering if you don’t mind shelling out another $20 or $40. The X99-Gaming 5 board, for example, costs about $20 more, but caters more towards gamers. It offers a very similar feature set to the UD4, but has a catered audio solution, as well as Killer E2201 Ethernet (I actually consider that a downside, but some gamers might prefer it). The UD5 costs $40 more, so it’s not a great contender, but it offers dual Intel NICs, dual M.2 slots, as well as Wi-Fi (which hogs an M.2 slot).

But enough of other boards. For its price-point, I think the X99-UD4 is a fantastic option for a new build. As I said above, it succeeds in being a “sweet spot” board – it doesn’t go overboard, but it doesn’t sacrifice anything important, either.