If you’ve read this review from start to finish, I wouldn’t blame you if you came to the conclusion that this wasn’t an Editor’s Choice-worthy board. After all, I did have quite a bit of issue with the board’s EFI, and I think some small improvements to the company’s software package could improve it a lot. But in the grand scheme, this board is fantastic, and does earn an EC in my eyes. Let’s do a run-down of good and bad.

First off, this board is packed to the gills with features – and yes, its $350 pricetag certainly matches that. The board’s design is good, and there’s an ample number of fan headers (an understatement, really – we’re talking seven). For those wanting to go the water cooling route, you can even add the MOSFET heatsink to the loop. There are many audio-related niceties to take advantage of as well, and I suppose I can give some credit to the Killer Ethernet NIC. This board was built for gamers, plain and simple. 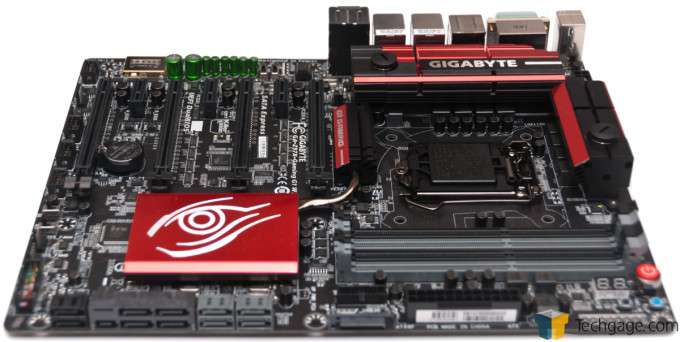 There are a couple of other nice touches as well, like the inclusion of a SATA power port on the board to help people supply additional power to their GPUs, and I’m always a big fan of onboard BIOS LED readouts. The same could be said for the onboard power switches. Further, the overall design is what I’d call “smart”; the 8-pin power connector up top is well-placed, as are all of the fan headers. If aesthetics are important to you, I think the board hits another home run here.

One aspect of this board that I thought was really nice was that GIGABYTE included a total of 6 sleeved SATA cables. That seems really simple, and it is, but it’s something I’ve found is appreciated by everyone I’ve mentioned it to. If we’re building a nice new rig, we of course want to keep it looking nice, and sleeved cables definitely help with that goal. Having one of each SLI bridge is yet another nice feature, as is the inclusion of a 2.5″ USB 3.0 bay, should your chassis even have a spot for one of those.

I don’t think that this board has the best EFI, but aside from that, the rest of it offers close to exactly what I look for in a board. It’s just a great overall package, with many minor things helping it to become a majorly nice offering. 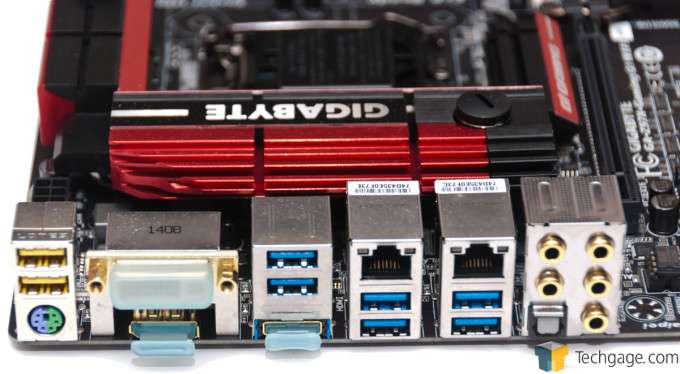 Of course, I can’t simply conclude this review by patting it on the back and leaving it at that (let’s face it, I’d probably prick my hands). I do think the software package could become “great” if GIGABYTE merged all of its individual tools into its overall EasyTune suite, and likewise, its EFI and software could use a few more features. I couldn’t believe that fan control was seemingly absent in the EFI, which is a far cry from what we saw on the ASUS and MSI boards, what with their robust plot charts and automatic fan profiling (GIGABYTE has this in software).

I harped enough on the EFI on that respective page though, so there’s no need to repeat myself. I do think that like the software, small changes would do wonders for GIGABYTE’s EFI, so I look forward to seeing its next major iteration. Or, perhaps there’s a chance that my complaints have already been tackled for the X99 generation? We’ll soon see.

Despite the things I don’t like about the Z97X-Gaming G1 WIFI-BK, none of them are major, and all of them are things that are not dealt with that often. Overall, the package here is good, and I’d be hard-pressed to not recommend anyone looking for a great gaming motherboard to toss this one onto their consideration list.