In late April, AMD released its first-ever six-core processors, the Phenom II X6 1090T and 1055T. At the same time, it also launched it’s latest highest-end chipset, the 890FX. Compared to 890GX, there is little different, but for those looking to use dual-GPU’s and achieve the highest overclocks, the right choice is 890FX. Price-wise, it’s hard to even notice the difference between the two, so if a board is priced right, looks good and offers the functionality you need, picking one up is a no-brainer.

To help us put the 1090T processor through its paces at its launch, AMD sent along MSI’s 890FXA-GD70, a board we briefly talked about in that review. My original goal was to get more 890FX offerings in, to do a little roundup, but as MSI’s board failed on us, and we likewise failed to receive another, the roundup idea began to fall through. There’s ASUS, of course, but I wanted a mainstream roundup, and that company’s mainstream part, the M4A89TD Pro was too busy flying off the shelves, or something to that effect, and again, no sample.

As this review insinuates, Gigabyte was the only company able to send us a perfectly operational mainstream 890FX board, and while I feel a bit silly for not having other 890FX boards to compare to, I’ll work with what I have. For the sake of comparison, I also benchmarked Gigabyte’s MA790FXT-UD5P, which happens to look almost identical to this one, and uses AMD’s last-gen highest-end chipset, the 790FX. Because the boards are so similar, the benchmarks will be interesting (or not).

Like the rest of Gigabyte’s top-tier motherboards, the “A” in the model name implies that it features full USB 3.0 support, which includes the “Power Boost” feature which provides additional power to such devices, including those that simply need to be plugged in to charge. Gigabyte first introduced this feature last fall, and it’s apparent that it’s a useful one, since other companies have since adopted the same idea.

For your S-ATA 3.0 needs, the board features two ports which are powered by AMD’s SB850 southbridge. The board also touts an “Auto Unlock” feature, which gives you the power to potentially unlock “locked” cores on your processor, whether it be a dual-core or a triple-core. Your mileage may vary here, and as we’ve been testing out this board with the six-core 1090T, the feature served no purpose. 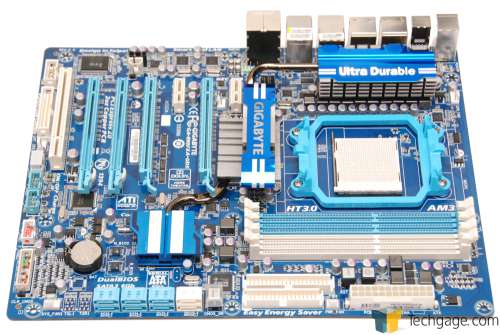 As a whole, the 890FXA-UD5 doesn’t look much different from most of Gigabyte’s other boards. That’s not necessarily a bad thing, though, as at first glance, the layout looks good, and there are a sufficient number of fan connectors scattered about (five in total, including for the CPU cooler). If there’s just one complaint I do have, it’s that the eight-pin motherboard power connector is hidden behind the “Ultra Durable” heatsink, and as it’s right in line with the blue cover, removing the connector once plugged in is a little tricky.

Taking a look at the bottom right-hand corner of the board, we can see eight SATA ports, with the two white ones being the 6Gbit/s offerings, along with a fan connector and ATX chassis connectors. You might notice also that there are three internal USB connectors, whereas on many boards, there are just two.

I also need to point out the fact that the BIOS battery is in a very easy-to-access spot, and it’s appreciated. It’s only once in a blue moon when I find myself having to resort to yanking the battery out, but when it’s located in an area where components need to be first removed (like under the GPU), it’s frustrating. 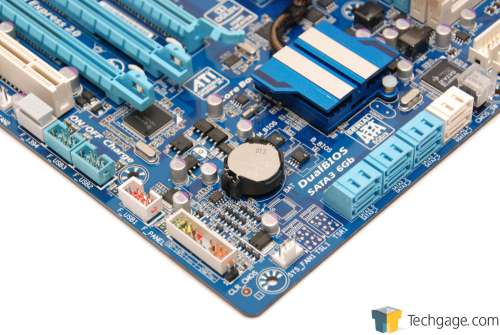 The board features four DIMM slots as expected, capable of supporting up to 16GB of RAM. For those who are still holding onto a floppy drive, or IDE storage devices, you’re well taken care of here. Another one of the fan connectors is located here, right in between these connectors and the 24-pin motherboard connector. 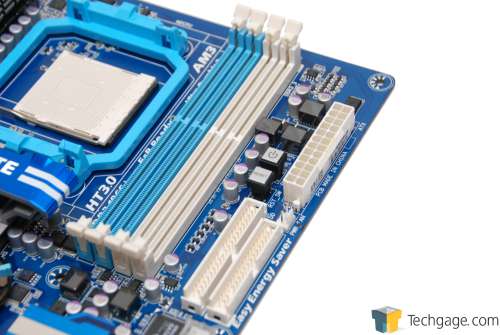 As the 890FX chipset supports graphics cards in a dual x16 configuration, seeing a couple of those slots here is not surprising. But, it is surprising to see four of them. Perfect if you want to run even more than two GPUs, for something like [email protected] Or, you can use the spares for other PCI-E devices, even if they don’t fully fill out the x16 slots.

In addition to the four x16 slots, there are two x1 and also a legacy PCI connector, for your network adapter, audio card, or what-have-you. 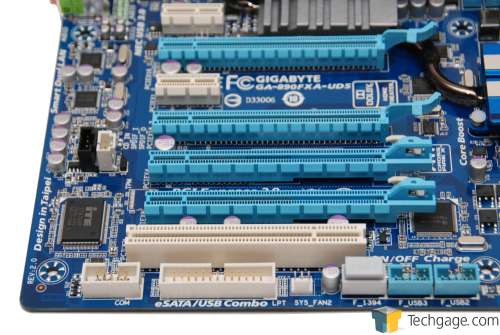 To the left of the CPU socket (real perspective, north-east in the picture) is an 8+2 power phase design. Eight are for the CPU itself, while the other two are for the memory and memory controller. In this same image, you can see the slightly hidden 8-pin motherboard connector, and also the CPU fan connector which is readily accessible. 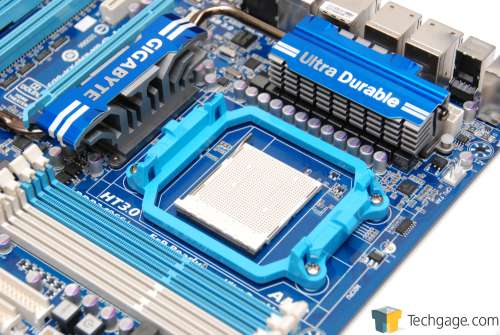 On the back I/O panel we can see that not much is missing. In fact, nothing is missing that I can see. Both FireWire standards are taken care of, and in addition to those, there are ten USB ports (two are 3.0), 2x LAN ports, the six-channel audio, and also a PS/2 port for either a mouse or keyboard. 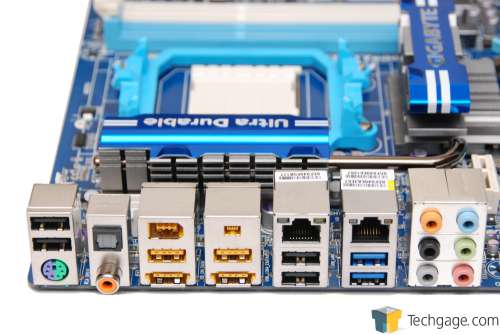 In way of accessories, there are four SATA cables, a floppy connector, an IDE connector, the back I/O port, some stickers, and of course, the manual and driver DVD. 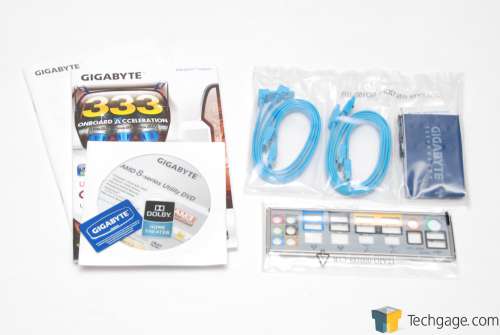 Overall, the board and package seems to fit its $190 price tag well, and I can’t see what could be added to make the entire deal even sweeter. The board is well-designed, looks good, has a smart layout, and lots of flexibility. Let’s next check out its BIOS to see if it matches up.