For the sake of CPU stress-testing, we use LinX. Compared to other popular CPU stress-testers, LinX’s tests are far more gruelling, and proof of that is seen by the fact that it manages to heat the CPU up to 20Â°C hotter than competing applications, like SP2004. Also, LinX is just as effective on AMD processors. Generally, if the CPU survives the first half-hour of this stress, there’s a good chance that it’s mostly stable, but I strive for a 12 hour stress as long as time permits.

If the CPU stress passes without error, then GPU stress-testing begins, in order to assure a system-wide stable overclock. To test for this, 3DMark Vantage’s Extreme test is used, with the increased resolution of 2560×1600, looped nine times. If both these CPU and GPU tests pass without issue, we can confidently declare a stable overclock.

Because we received a faulty motherboard with our X6 1090T launch kit, I wasn’t able to overclock the processor as I had hoped. Since then, I hadn’t found another opportunity, but with this review, I was finally able to buckle down and see what our sample is made of. Believe it or not, it seems to be built with less awesome than retail chips!

In looking around the Web, it seems like 4.0GHz overclocks are rather straight-forward to achieve, but that wasn’t the case with our sample. At least, not where stable operation is concerned. LinX is admittedly hardcore, but I can’t feel entirely confident unless it passes that test, and in this case, 4.0GHz and higher just didn’t happen, no matter the voltage or tweaks I made.

Temperatures were not the issue, either, since our Corsair H50 did a great job in keeping all of the cores at well under 50°C. After a bunch of tweaking, I found that even 3.95GHz wasn’t going to happen, but when I whittled the frequency down just a little bit more, 3.92GHz became stable: 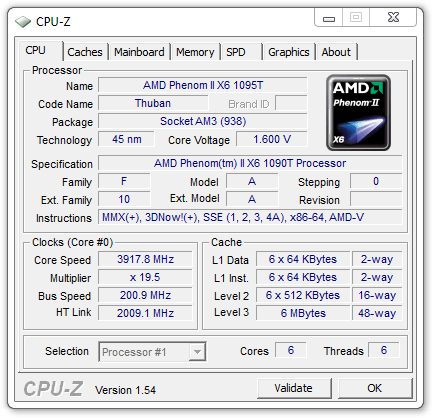 Because this was my first foray into overclocking this CPU, it’s hard for me to critique the success of OC’ing on this board. As we get more boards in, we’ll see if we can’t push that chip just a bit higher. But from what I’ve seen, and all the time I spent overclocking with the board, I have no complaints. And from experience of overclocking with Gigabyte’s other boards, I am fairly confident that our sample just won’t go any higher, rather than it being the board at fault.