by Rob Williams on October 27, 2010 in Peripherals

GIGABYTE’s not a huge name in the peripheral business, at least on these shores, but it hopes that will change in the near-future. To help kick things off, it recently released its first gaming keyboard as part of its Aivia line-up, and in addition to sturdy construction, it features unique color choices, macro capabilities and an excellent feel.

Although I enjoy taking a look at the odd peripheral for the website, there’s one aspect of it all that I can’t stand, and would avoid if I could… the software. There are a couple of reasons for it. The first is that most gaming peripheral software looks ridiculous, and is apparently made with a 10-year-old in mind, with a bucket-full of random textures tossed onto an application interface. Then there’s the macros. Oh, don’t get me started on the macros!

The problem I have with these is that more often than not, I feel like I should be studying from a book to figure out how to set some up. And again, the chances that even a little bit of documentation is available is going to be ultra-slim. Given the history of hatred I’ve had for setting up macros, I admit that I was quite impressed with GIGABYTE’s implementation here.

GIGABYTE is not known as being a top-dog where peripherals are concerned, but its implementation of setting up and executing macros is by far the easiest I’ve ever dealt with. Though, I will say that like previous experiences, not everything here was self-explanatory, but it only took a couple of minutes of fiddling around to understand how things worked.

Remember how I mentioned that most software interfaces for gaming peripherals look to be built for 10-year-olds? Yeah, this one, too. 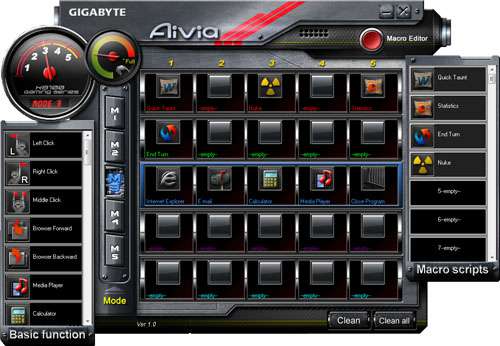 The fortunate thing, though, is that this is the main interface, and there’s little else. That’s a good thing, because it means there’s no faux doors to open or pop-up elements to trigger. Most of what you need is right here, and is easily configurable. As mentioned earlier, the keyboard allows up to 25 macro shortcuts at a time, and the selections here are color-coded to make things easier to set up.

To create a macro, you need to click on “Macro Editor”, which will launch this screen: 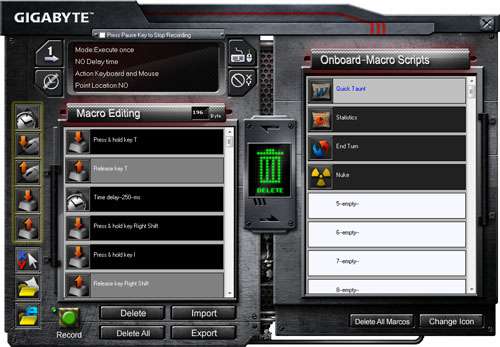 At the top, you can configure how your macro is going to run, such as whether to have it execute just once, continue until you stop it, or to loop indefinitely. You can also set up a delay time, whether the macro includes mouse functions and where to point the mouse cursor once the macro has started.

In the gray area is where your macro will be recorded, and after hitting the “Record” button, you can begin typing away, or really take your time and add things in like delays, mouse cursor positions and things like that. It’s all fairly simple to use, though really advanced macros will understandably take you a while to create. Personally, I never find myself with such a need, so I stick to simpler ones.

To save and store a macro, you need to click anywhere in your macro editing box and drag it over into an empty box in the “Onboard-Macro Scripts” section. If you want to delete a stored macro, you can simply drag it into the big “DELETE” button. Should you want to back them up, you can do that also with the “Export” option, and “Import” them again later. Because these exported .ini files are proprietary in nature (not easy to read and understand like some others), you can’t edit them to your liking outside of this program. Here’s a portion of an .ini file as an example:


Since the K8100 doesn’t have predefined media keys, you can dedicate some of these macros for that use. There are preset options found at the main screen you can use, such as browser, e-mail, calculator, media player and more, each of which will launch the respective default applications. One of my favorite options is “Close Program”, which is a good Alt + F4 substitute.

So what can you do with your macros? As I mentioned, I have almost no use, but I did consider that I could be one of those annoying guys you see spamming up online multi-player FPS titles.

One of the things GIGABYTE advertises on this board is the ability to push up to 20 keys simultaneously. As far as I’m concerned, 20 is overkill, and I’m highly doubtful any gamer will ever need even six or eight (unless the game you play literally requires you to sit on the keyboard). But twenty does look good on paper, doesn’t it?

To test this feature nonetheless, I did what I could to push as many keys at once, and overall, I found the limit to be more like 10, not 20. When I really tried to push a lot of keys at once, I’d almost get no output at all. But when I kept it to a more modest number, I had success.

Here are a couple of examples of me pushing 10 random keys at once:

These outputs were generated by me pushing down on all ten keys at the same time, and as you can see, the results are quite good. Still, no matter what I tried, I couldn’t surpass 10, and sometimes, after fiddling around for quite a while, I couldn’t even get up to 10 depending on the keys I was hitting. It might be that some sets of keys simply are not able to be pressed down in conjunction with another, at least, with so many at once.

I’m awaiting a response from GIGABYTE on this, but to me, it isn’t a major issue. As I mentioned, I can’t see any gamers, even the most hardcore of us all, being able to take advantage of more than eight or ten, let alone twenty. If anything, it affects only those who are trying to push twenty at once just for fun.