by Rob Williams on October 27, 2010 in Peripherals

GIGABYTE’s not a huge name in the peripheral business, at least on these shores, but it hopes that will change in the near-future. To help kick things off, it recently released its first gaming keyboard as part of its Aivia line-up, and in addition to sturdy construction, it features unique color choices, macro capabilities and an excellent feel.

Whenever I take a new mouse or keyboard for a spin, I’m always a little bit wary, for what I’m sure are obvious reasons. Peripherals seem like a simple thing, but the fact of the matter is that you could use two keyboards that look quite similar, but feel completely different. And after having used a particular setup for a while, moving to another model is always a bit strange at first.

With the K8100, though, I was actually quite amazed at how quick it felt “just right”. For well over the past year, I’ve been using a simple Logitech Internet keyboard, so the two aren’t alike at all. But still, this one just felt right, with everything from the layout to the feel of the keys.

For gamers, the most important thing about a keyboard is its feel, and I’m certain what GIGABYTE has done here will please many. This isn’t a mechanical keyboard, but it almost feels like one. The keys are very responsive, and though there’s no defined “click” with each button press, you can hear them just fine as you type – if that’s your thing. 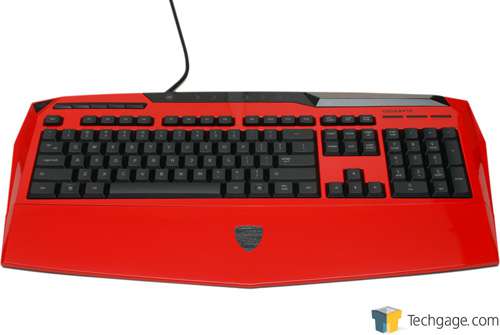 The fact that the K8100 allows a large number of simultaneous key presses is huge, although not totally uncommon. It’s a feature I appreciate quite a bit as I’ve run into many situations where I’ve pushed too many keys at once with my cheapy keyboard, and the PC would react in strange ways. The most common side-effect is broken button input, forcing you to close your game and reboot. I even had this occur a couple of times while playing through Medal of Honor, and it’s only a five hour game!

That kind of thing just won’t happen with this keyboard, and as mentioned before, even though it doesn’t seem to live up to its statement of 20 keys (I’m still waiting to hear back on this, since it could be an isolated “issue”), it did manage to continually deliver 10, which should be more than enough for anybody, hardcore gamer or not.

Another major plus that the K8100 has is its reliable and easy-to-implement macro functions. The UI for the software is, not surprisingly, ugly, but after you spend a couple of minutes with it, you’ll be using it like a pro. There’s no scripting support, so if that’s important to you, you might want to look elsewhere. Like the 20 simultaneous keys feature, I’d have to imagine that true scripting for macros is not a feature many people look for. 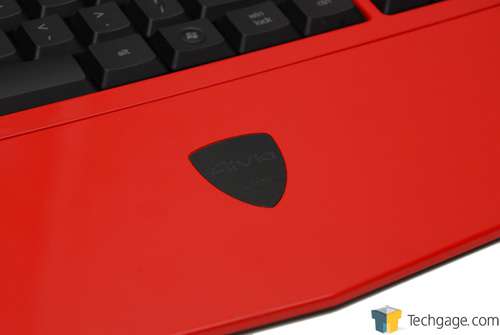 Though I’m limited in testing out macros since I can’t even think of advanced ones to create (perhaps macros are best-suited for MMO gamers), the macros I did create executed without issue whatsoever. They were completely reliable, and if there was any issue at all, it was attributed to a fault in the macro setup itself, and could be corrected.

There are two things I haven’t mentioned up to this point, that I will here before wrapping up. First, the keyboard’s backlight LEDs can be turned off via a button in the top right-hand corner. It’s hidden, for no other reason that it might not be used all too often. Also, there is a USB port on both sides of the keyboards, near the back. These are also hidden, but are easily accessible.

At $70, the competition for this board is fierce, with both Logitech and Razer offering comparable and possibly even more feature-packed options. For those who don’t care about brand, but just need a reliable keyboard, and perhaps even happen to like the retro styling of the K8100, I’m confident you won’t be upset with it. It’s become my main keyboard, and I expect it to stay that way for a while.

One thing I will say, and I have to give thanks to a friend for pointing this out, is that this red version almost looks like the perfect backdrop as a themed board for my favorite footy team, Arsenal FC. Even the emblem looks to follow almost an identical shape!