GIGABYTE has been making peripherals for a while, but doesn’t always catch the attention of the gaming market. Late last year, the K8100 keyboard was introduced and signified a change for the company’s peripheral arm as it pushed further the lucrative high-end gaming sector. We managed to get our hands on said keyboard and came away impressed enough to award it an Editor’s Choice.

Released a couple weeks ago is the partner in crime to that keyboard, the M8600 Aivia wireless gaming mouse. Rather than release a standard gaming mouse with the same old sensor, buttons and throw in some wireless connectivity with lackluster battery life, GIGABYTE took it upon itself to create a real wireless gaming mouse that wasn’t just a cookie-cutter-copy of existing peripherals in a new shell.

On the face of it, the feature list is fairly generic. The M8600 is wireless, has 11 buttons, is programmable and has a rather ridiculously high 6400 DPI laser sensor; all the makings of a high-end gaming mouse. So what makes it so special? The fact it has a battery (well… two actually) that’s worthy of the term ‘Wireless’. Boasting a time of 50+ hours for each battery, I was a little sceptical to say the least. Most wireless gaming-grade peripherals sacrifice battery life for performance, so much so that you barely get a day’s use out of them before the inevitable 6-8 hour recharge – and God forbid you forget to charge it overnight and have the mouse die in the middle of a hardcore Bejewelled session.

For now, we’ll leave the battery there and charge on with the review [Ed: yes, shocking use of a pun]. The mouse is presented in a tube, rather than a box, lavished with lots of black, vibrant color and gold lettering. 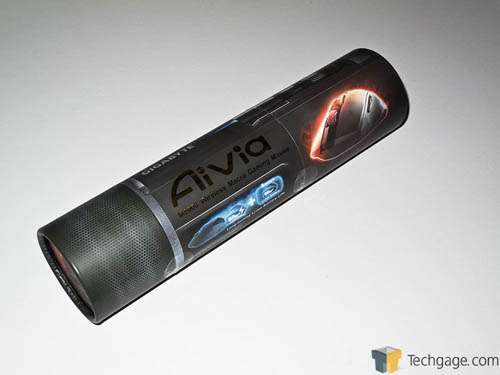 Compartmental design, one end holds the mouse while the other holds a bag of accessories and is held in place with a mini-CD which stores the GHOST Macro software. 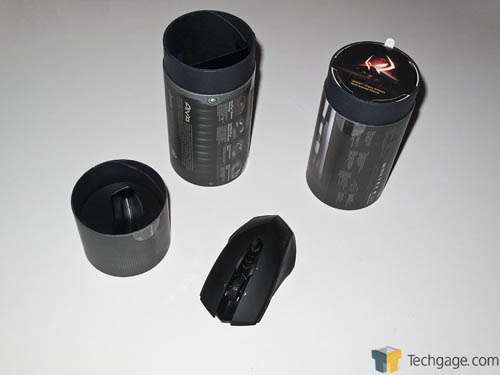 The bag is Nylon (from what I can gather) with a polyester lining for padding, complete with a zipper and handle; presumably for transportation protection when heading off to a LAN. 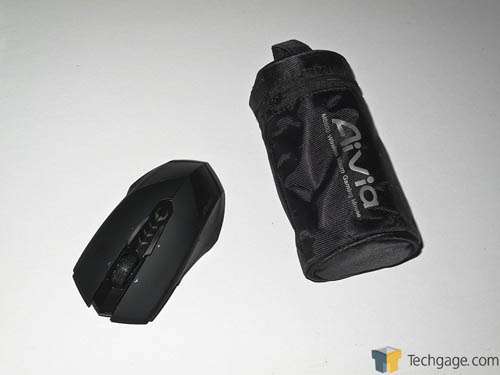 Opening the bag up and throwing the contents out in a conveniently arranged manner, we can see there’s quite a lot of extras. A spare battery, 2 cables, a dock/wireless receiver and a spare set of Teflon feet. I can’t say I’ve ever been so heavy-handed with a mouse to ever need to replace the gliders of a mouse, but it’s the little (useful) extras that can make a difference. 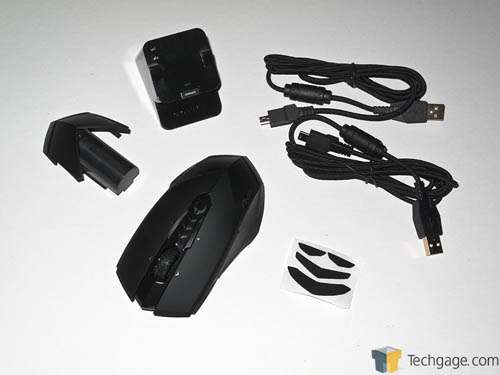 The docking unit offers three uses; first it acts as the wireless receiver; a dock for charging the mouse directly, and finally for charging the spare battery while you continue to use the mouse. You cannot charge the mouse and spare battery at the same time due to the extra moulded detailing on the cartridge – plus, it would be a bad idea anyway as it could strain the charging capabilities of a single USB 2.0 port. 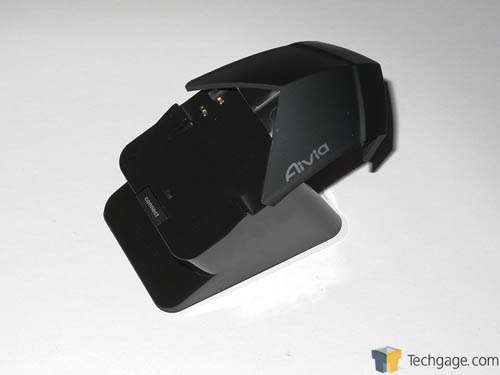 From the contents picture, you may notice there are 2 cables. One is for the docking station and the second is for the mouse. Both cables are USB but one end is a proprietary moulded micro-USB adapter; this serves as a more secure locking mechanism. In practice, these connections are very stiff and do require a fair amount of force to insert. With the mouse itself, the lock is a little too stiff since it can be extremely difficult to detach the cable once in place, due to requiring the additional step of holding a slide open on the underside while you try to pull the cable out.