by Rory Buszka on December 3, 2008 in Motherboards

On the test bench today, we have Gigabyte’s latest Micro ATX offering, the Intel G45-based EG45M-DS2H. This board carries the typical Gigabyte enthusiast charm, but also caters towards those looking to build a media center. But how does it stack up against the other Intel mATX boards we’ve tested recently?

As a company that serves the PC enthusiast market almost exclusively, Gigabyte’s product line can usually be counted on to reflect what enthusiasts, upgraders, and gamers are actually buying. There’s an impressive array of offerings in Gigabyte’s product line, ranging from the most affordable budget-enthusiast parts to the most highly-tweaked cost-no-object options, but every product in their line has been tailored to appeal to the aftermarket and system builder crowd.

So when we began seeing a proliferation of Micro ATX products in their product line years ago (approximately timed with the arrival of “media center PCs” based on more powerful integrated graphics processors than usual), we knew we were beginning to see a broad shift away from a solely performance-oriented PC enthusiast market toward one that designed machines with specific applications in mind.

It’s notable, then, that Intel’s last two graphics chipsets have garnered quite a bit more attention than their predecessors, equipped with vastly-improved GMA X3500 (in the Intel G35 chipset) and GMA X4500HD (in the Intel G45 chipset) integrated graphics cores. Intel has obviously been devoting more resources to competing in the integrated-graphics arena as of late, and it shows – they now have a serious contender for a media center PC chipset on their hands in the G45 Express, with its DirectX 10 capable GMA X4500HD integrated graphics core that also provides hardware acceleration for HD video decoding, offloading that processing task from the CPU altogether. 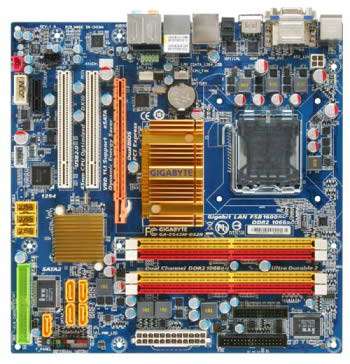 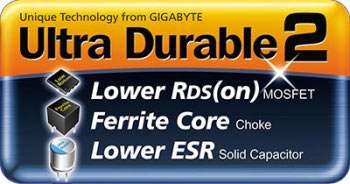 Gigabyte’s EG45M-DS2H motherboard is the second board we’ve tested based on Intel’s G45 chipset. It’s designed to support LGA 775 processors up to and including the latest 45nm variants, and features Gigabyte’s “Ultra Durable 2” design, which incorporates conductive polymer capacitors, ferrite-core choke coils, and power transistors (MOSFETS) with lower “on” resistance. What does all this mean to you? It means you’re buying a board that will still work just like new, ten years from now. The motherboard also sports a HDMI video output port and a digital Toslink audio output port, making it attractive to home theater PC builders.

The EG45M-DS2H features environmentally-conscious “Dynamic Energy Saver” technology, with “Dynamic 4-Gear Switching” technology in its quad-phase CPU power supply. The CPU power supply stage can turn unnecessary switching transistors completely ‘off’, based on CPU usage and loading. Some of Gigabyte’s Dynamic Energy Saver boards feature up to twelve separate power ‘phases’ (“gears”), but the EG45M only provides four levels of switching. Still, the Dynamic Energy Saver feature equates to improved energy savings over boards that lack the feature, and also helps to improve the longevity of the motherboard. That means lower cost of ownership over the long term.

The board is also equipped with Gigabyte’s Ultra TPM hardware data encryption technology, which makes it an option for IT professionals who are looking to safeguard critical data. The encryption key itself is stored on an external flash media device, which can be detached from the machine to render its data unusable – a useful feature if you’re guarding nuclear secrets, or something equally important.

Of course, what we’re really most interested in from the Gigabyte board is the performance of its Intel G45 Express chipset in our strenuous, targeted application testing. Intel claims that the G45’s built-in GMA X4500HD graphics core is around 70% faster than the GMA X3500 graphics core in the G35 Express chipset, thanks to a beefed-up graphics core with two additional universal shader units (bringing the total up to ten shader units), and an increase in graphics core speed to 800 MHz from the G35’s 667MHz. On the CPU side, like the rest of the 4-series chipsets, the G45 also adds FSB1600 capability.

Even though we reviewed the G45-based Intel DG45ID motherboard some time ago, we don’t feel that it was the best showing for G45 (we ran into issue after issue), so we’ve been waiting to get our hands on a third-party board that’s been more highly tweaked for performance (and functionality). And Gigabyte provides some of the most polished product offerings out there, so with the EG45M-DS2H and Intel’s latest G45 chipset drivers in hand, we’re looking forward to seeing what the Intel G45 chipset is truly capable of.