Though it may be hard to believe, it’s already been close to five months since Intel took the veil off their latest mainstream chipsets, G45 and P45. We’ve only taken a look at three of the new boards since then, but today marks the fourth. In our other reviews, we’ve been happy overall with the quality and performance exhibited, so we expect nothing less from the board we’re taking a look at today, Gigabyte’s EP45-EXTREME.

What makes it so “EXTREME”? Well, not the price, for one thing. At ~$245 ($215 with MIR at one e-tailer), the board costs more than most mainstream offerings, but Gigabyte promises to make up for every extra dollar you spend. They do this by tauting extreme overclocking capabilities, including a lot of copper and a water-cooling block, a twelve-phase power solution and more.

Compared to the $400 ASUS Rampage Extreme which we took a look at a few weeks ago, this board promises an awful lot, but for a far more reasonable sum. Coupled with the fact that the board utilizes DDR2, your entire new rig becomes less expensive when compared to ASUS’ “Extreme” (which requires the more expensive DDR3).

Like many other enthusiast P45 motherboards, Gigabyte has gone beyond what Intel states as being the maximum rated spec for both the memory and FSB, with a rating for DDR2-1200 and FSB rating for 1600MHz. Aside from that, P45 brought PCI-Express 2.0 to the mainstream market and also utilizes 8x PCI-E lanes if you choose to run Crossfire. Overall, it’s proven to be a great chipset for the money.

As you can see below, the EP45-EXTREME lives up to Gigabyte’s habit of creating the most colorful boards on the market. Some of us don’t like this, while others love it. I’m somewhere in the middle. It’s good to have eye-candy, but I’m partial to a dark-colored board. Give me a pure black board and I’d be one happy tech-geek. 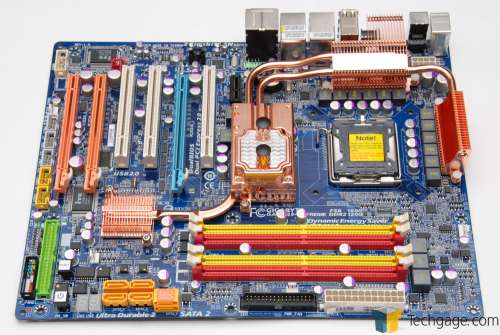 The bottom-right corner is where most of the good stuff can be found, with a total of six S-ATA ports, including two vertically-mounted ones), a BIOS status LED, power button and the collection of ATX chassis connectors. 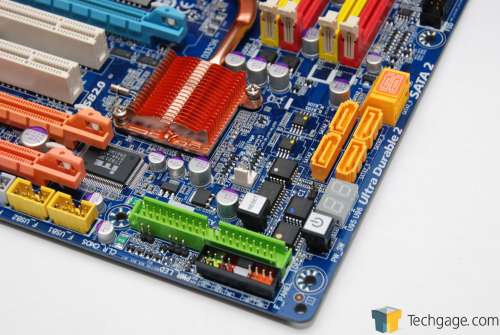 Moving on over, we can find three PCI-E slots for your GPUs (tri-Crossfire could be used, though with degraded performance compared to an X48), three legacy PCI slots and also a single PCI-E 1x at the very top. The bottom of the board features both a 4-pin and 3-pin fan connector, the former which is seen in the below photo. 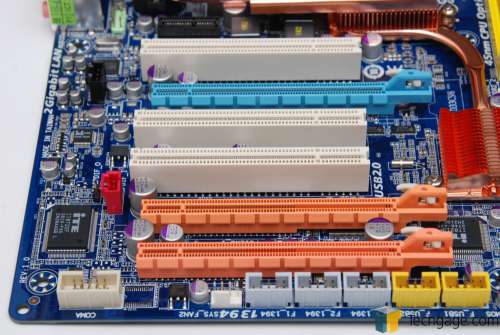 As mentioned earlier, Gigabyte opted for DDR2 support on this board, obviously to save their customers money, and I can’t disagree with the choice. A fan connector is conveniently placed to the side of the DIMM slots – perfect for that RAM fan. 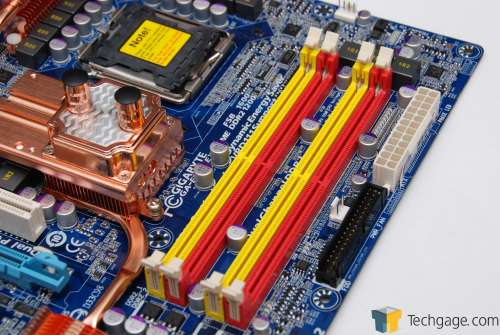 Gigabyte has been doing a great job modeling their chipset heatsinks, both for performance and aesthetics, and this one is no exception. If the likes of Gigabyte and ASUS keep things up, it might be a good time to invest in copper. You can see the twelve-phase power solution surrounding the CPU socket, as well as the BIOS battery hidden underneath the heatpipes in the top center of the photo. 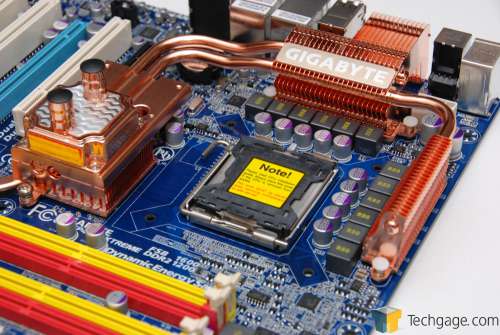 Although Gigabyte wasn’t the first company to include a water-blocked Northbridge, it is appreciated. Even if you don’t have the intention of using a water-cooling system on your rig, the heatsink is designed to effectively dissipate heat either way. 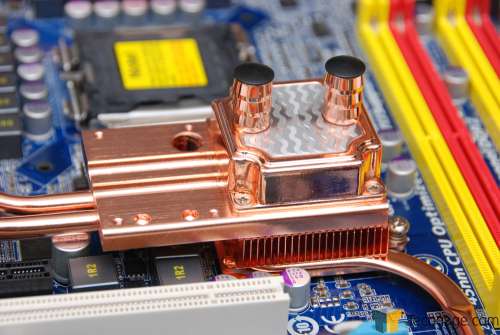 The back I/O section is far from barren, with a total of eight USB ports, two LAN, 7.1 audio and S/PDIF connections, PS/2 mouse and keyboard ports in addition to a Clear CMOS button… just in case things happen to go awry during overclocking. 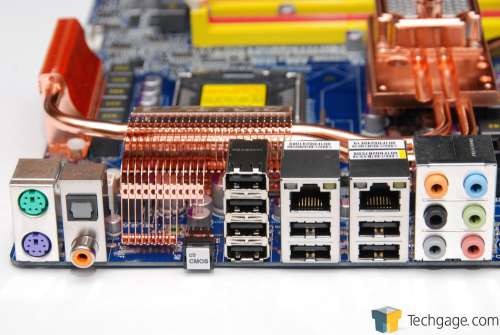 If you want proof that Gigabyte loves their copper, look no further than the photograph below. This massive add-in “card” is designed to plug into the board, above the PCI-E 1x slot, and intertwine into the Northbridge section, ultimately making the entire passive cooling rig as one. Is it necessary? No. Is it gaudy? Oh yeah. That’s a matter of opinion of course, and it’s difficult to complain about an add-in like this in an already well-priced board. 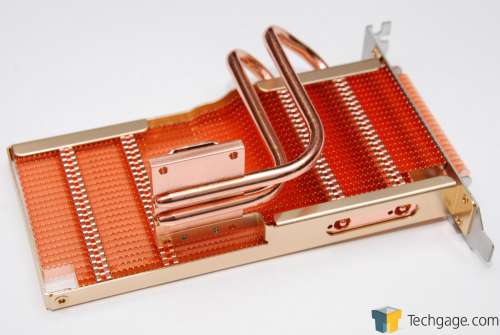 Finally, included in the accessories you’ll find all the necessary HDD/ODD cables, along with an add-in card that adds some e-SATA functionality to the board, and another for Firewire. 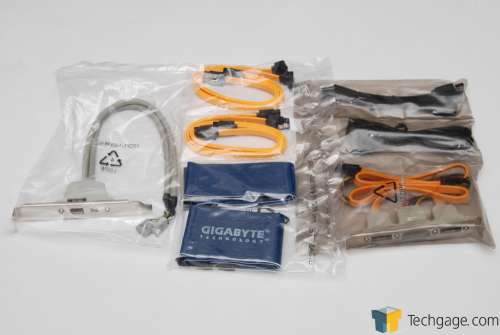 Also included is the manual and driver DVD, along with a few stickers and the back I/O panel. 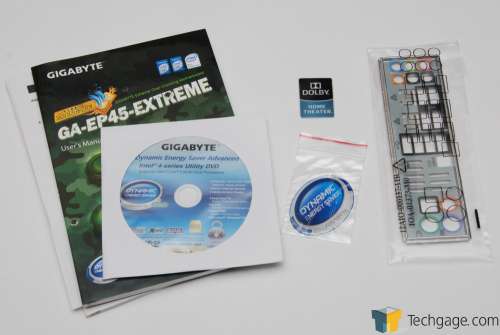 Overall, this is a great-looking motherboard and packs a lot of functionality. The add-in copper heatsink seems a little unneeded, but there’s little denying it should keep the Northbridge cooler than other solutions. It’s just too bad that it takes up so much room.

Layout-wise, the board also delivers. The most inconvenient thing I found was the location of the 8-pin motherboard connector, but given that most people will only plug this in once or twice, it isn’t that bad. If I had second complaint, I would have loved to have seen two more S-ATA ports vertically-mounted. It’s not that important, but it definitely looks better when all installed.