Since we first took a look at Intel’s Core i7 processors, we’ve been able to follow-up with a look at one of ASUS’ launch motherboards, the P6T Deluxe. That board turned out to be quite good, but we were itching to test another to see how it truly compared.

Intel’s own board, the DX58SO, is one that I wouldn’t personally recommend, as it’s not much less expensive than the other superb offerings out there. It doesn’t overclock as well, only includes 4 DIMM slots, has the strangest layout and doesn’t include SLI support, like the ASUS P6T and the one we’re taking a look at today. This particular board from Gigabyte showed up much later than the rest, so we’ll see if that works out to their favor.

Upon the Core i7’s launch, many companies had boards prepared, but Gigabyte was the only one to have more than two. While three might seem like too many for a fresh launch, each one targets a different price-range, so in the end, it’s a good thing. The lowest-end model is the EX58-DS4, at $250, while the highest-end is the EX58-EXTREME, which is priced at around $330.

The EX58-UD5 not only settles in the middle of Gigabyte’s line-up, but at $300, it’s also priced right along the rest of the “mainstream” competition. What this means is that the board should include more worthy features than the lower-priced offerings, although performance (and maybe overclocking) should see little-to-no change. So what does the UD5 offer over the company’s own DS4 and the competition?

Compared to their own DS4 board, the UD5 offers a much more robust setup, including their much-touted “2oz copper” inner PCB layer, which they state will not only improve energy efficiency, but temperatures as well. The other main feature to be included on the UD5, over the DS4, is the ability to use 3-way CrossFireX or SLI configurations… a huge bonus for those looking for extreme gaming performance.

Being an “Ultra-Durable” motherboard, the UD5 also features what seems to be a countless number of additions, such as improved performance, better temperatures and increased efficiency. We briefly discussed the latest Ultra Durable 3 features in last months look at the EP45-UD3P, so if interested in learning more, I recommend checking it out. 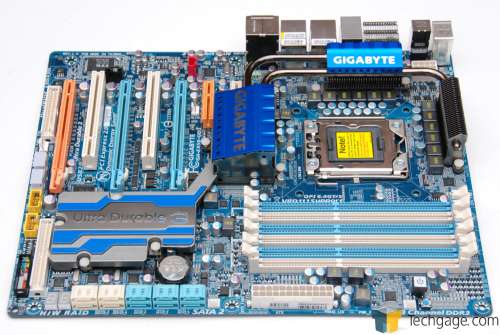 If you are familiar with Gigabyte’s motherboards, what might strike you about this one is the color scheme. Although a similarly-colored PCB is used, the component colors are much more mellow, and somewhat subtle when compared to their previous offerings. This might come as a welcomed surprise to some, and I’d have to agree. I still tend to prefer dark-colored motherboards, but this one still looks great.

As we take a look around the board, it doesn’t take two seconds before we begin to realize just how feature-packed Gigabyte wanted this board to be. While most of their competition limit the S-ATA ports to six or eight, this board includes a staggering ten. That might be overkill for most people, but it’s sure nice to have that option, and it will save cash for those who would otherwise have to purchase an add-in card. 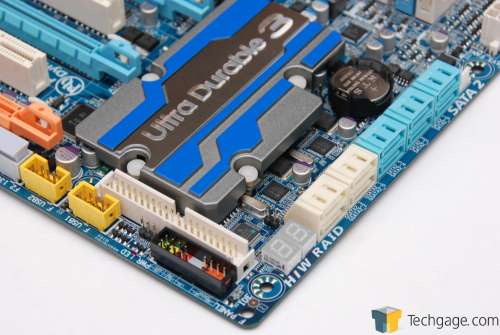 Also found in the same corner is the BIOS battery, which is actually rather convenient to get to, the ATX chassis connectors, which are in the most common-sense spot possible (unlike what’s seen on Intel’s own board), along with the various USB/FireWire connectors.

As with the vast majority of other X58 motherboards, this one includes six DIMM slots, with a capability to reach 24GB, if you so desire. That would require six sticks of 4GB each, though, and as it stands right now, it’s not going to be cheap. Luckily, even if you have to splurge and get 12GB, it’s not going to cost you an arm and a leg, which is a complete contrast to how things were just one year ago. 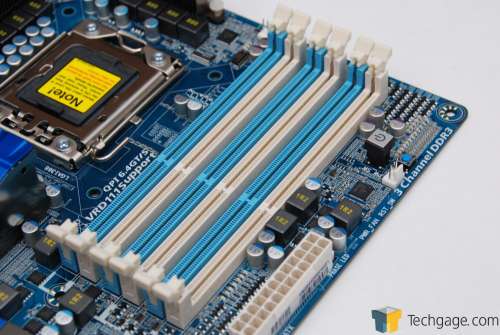 As promised, Gigabyte gives us three full-sized 16x slots to deal with, along with one PCI-E 1x, one PCI-E 4x and two legacy PCI slots. What’s great about this board is that Gigabyte actually gives us ample room to use a 3-way GPU configuration, although that will in all likeliness render the bottom 3-pin fan port useless. Likewise, it also means you’ll lose out on your PCI slots, so for any added peripherals, you’re going to need to use the PCI-E 1x or 4x slots. 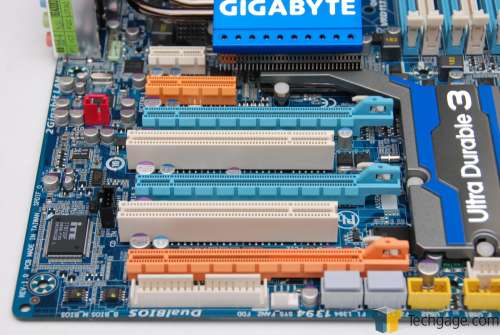 Surrounding the CPU socket is a robust 12+2+2 power phase solution. The twelve immediately surrounding the socket are dedicated for CPU use, while two more found above it are for the memory, while the other two are for the Northbridge. While this seems a little over-the-top, it will be appreciated by hardcore overclockers. Not so much by the usual consumer, though. 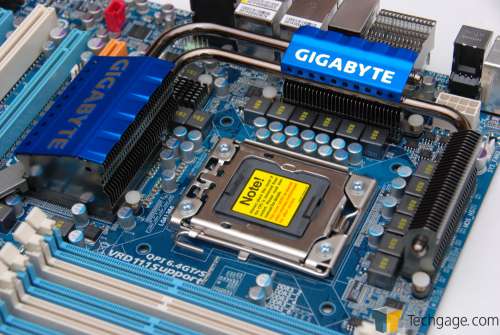 Motherboard heatsink designs don’t usually catch my eye, but this is easily one of the better ones I’ve come across. The dark-colored fins look fantastic, and the entire setup overall adds a lot to the visual appeal. No complaints here at all.

If you love LEDs, then you’ll love this board. When in full operation, small LEDs up towards the top-right corner light up, relating to the status of the respective components, and it looks great overall if you happen to have a chassis with a window. Also found here is the power and reset switches. These are oddly-placed, compared to what we’ve seen before, but they’re still easily accessible. 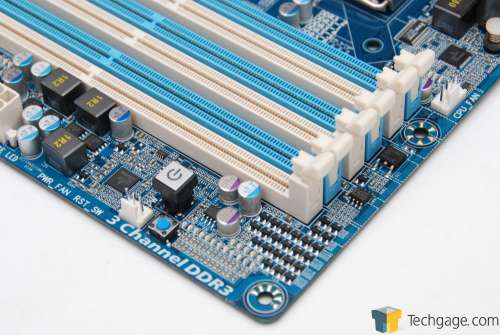 Taking a look at the back I/O panel further shows how feature-rich this board proves to be. Here, we find both a keyboard and mouse PS/2 port, S/PDIF audio (along with 7.1 audio using Realtek’s ALC889A HD codec), a single FireWire port, eight USB ports, two LAN ports (which can be coupled for 2Gbit operation) and also a Clear CMOS button, in case you overdo your overclock. 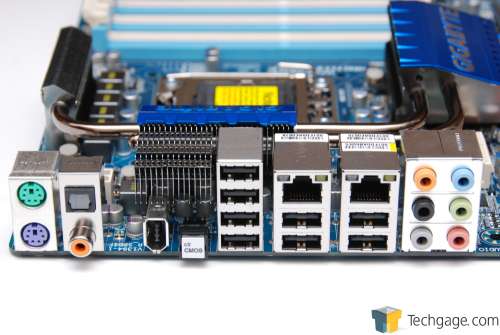 Not too much extra is included beyond what is necessary, but nothing is missing, either. Aside from the usual ODD/HDD cables, Gigabyte also includes an extra bracket that can be installed into an available slot, allowing for two E-SATA ports. I would have preferred to have seen these installed on the I/O port rather than this clunky addition, but at least there’s no lost functionality. 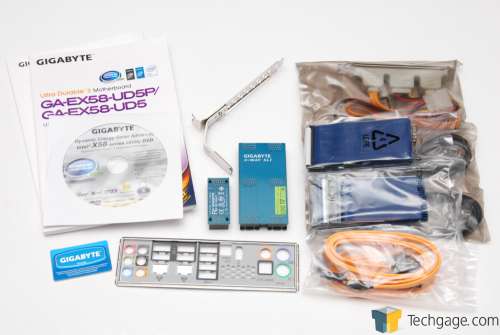 You’ll also note the two SLI bridge connectors, one for dual-SLI and the other for triple. The board doesn’t include CrossFireX bridge connectors as it’s common to find those in the box of your GPU. Also, there is a strange bracket here that I cannot figure out a use for, and Gigabyte didn’t respond to my query before publishing time. So, your guess is going to be just as good as mine. I had figured it might be used as a fan mount, to help keep your GPUs cool, but once installed, room wouldn’t allow it.

That aside, this is one very feature-packed board, and Gigabyte did a great job with both the design and the layout. The color scheme is different, but I’m quickly learning to like it. It might not be for everyone though, and that’s understandable, but I personally believe it’s a huge improvement over their previous boards. Can we expect the same level of robustness from their BIOS? We’ll find out next.