For whatever reason, I personally don’t find overclocking Core i7 half as much fun as Core 2 was, and one of the reasons might be because it seems so easy to find a top-limit, whereas before, extra tweaking would actually pay off. Overclocking this board was a great example of this. It does overclock, and overclocks well, but once I found that limit, I couldn’t get it to go much higher, even after three hours of tweaking. It was at that point that I gave up.

What’s worse though, is that I found the top-limit within a half-hour, which is kind of depressing in some regards. But the good news is that it’s a good top-limit… 190MHz Base Clock, to be exact. As long as the CPU would cooperate, that would give us a huge 3.8GHz clock on a Core i7 920, and 4.2GHz on a Core i7 940.

Given how unlikely it is to hit those clocks, I don’t think the 190MHz top-limit will anger many people. Things are even easier on the Core i7 965, where the Base Clock doesn’t even really have to be touched at all. 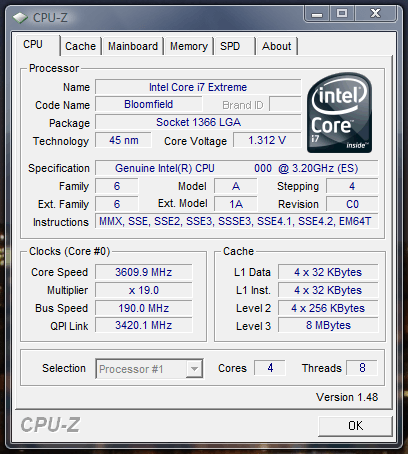 The amazing thing about this overclock is that it required absolutely no adjustment of voltages. None, nada, zip. That’s why the top-limit was found so fast. Because the ASUS P6T hit 180MHz, that’s the very first clock I tried here, and when it was successful without any voltage increase, I simply boosted it to 190MHz, where it stayed stable for eight hours + another four (I forgot to screenshot the first time, so re-ran it again).

After that, I tried 200MHz, of course, but even after pumping up the voltage all-around and trying various other configurations, it just wouldn’t become stable. For the most part, it wouldn’t even boot into Windows at all, and when it did, it would crash before I could even properly set up the stress-testing. I’d have little doubt that the board could exceed my personal overclock, but given how nice 190MHz is to begin with, in all actuality, it really doesn’t need to be any higher. I might change my mind once I see 920’s or 940’s with stable overclocks using that Base Clock.