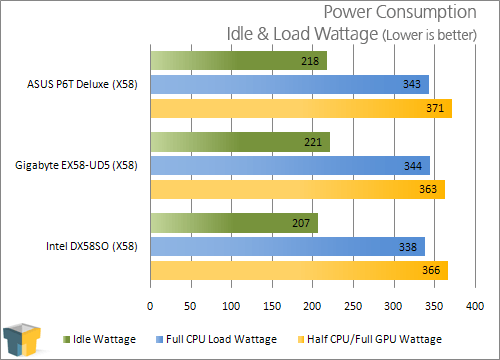 The differences here are minor, but interesting. The EX58-UD5 uses more wattage overall on average, but managed to draw a little bit less in the CPU/GPU test.

When I first received this board, I wasn’t expecting to be that impressed, but I was wrong. After all, so many motherboards prove to be very similar, and the main draw is usually the overall board design or overclocking-ability. Things were different here though. The EX58-UD5 is easily the best board of the three we’ve tested so far (we’ll be getting down to testing the ASUS Rampage II Extreme soon, though), and based off of what we’ve seen here, I’d highly recommend it.

After using the ASUS P6T Deluxe, I was left impressed, but while still a great board, Gigabyte one-ups them in various regards. Some of the main benefits of the Gigabyte board are not features that will be used by many people, but they should still be mentioned. The ASUS board, for example, tops out at 12GB of RAM, while Gigabyte’s board (and many others) can use upwards of 24GB. The second difference is that while the P6T Deluxe supports 3-way GPU configurations, Gigabyte actually gives you enough room to have three with dual-slot coolers. 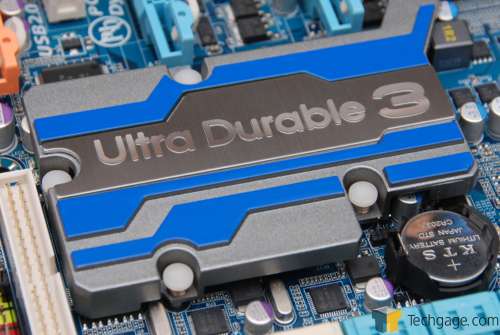 Overclocking isn’t a major issue to bring up, because while the EX58-UD5 did manage to score 10MHz more than the ASUS on the Base Clock, neither overclock is going to be used by that many people. Even with a 180MHz BCLK, a 3.60GHz overclock would be possible on the Core i7 920, and I’d find it unlikely that many people would hit that overclock stable, much less even more.

Still, the fact that we managed to hit 190MHz without touching a single voltage setting was impressive. I just wish we were able to go even higher, but it’s really difficult at this point to say what the limit there was. It could very-well be the CPU for all we know, but it’s hard to say until we test many more boards.

Other advantages of the EX58-UD5 are again features that many might not take advantage of, but to have them is great. I’m talking about the healthy supply of S-ATA and USB ports… ten and eight, respectively. Aside from all that, the board happens to look great, has a good layout and costs the same as the direct competition. The main difference is, Gigabyte seems to be offering a bit more for your money.