GIGABYTE is an industry giant, offering a countless number of products in multiple categories. The Force M9 ICE is one of its latest wireless mice, and endowed with “gaming mouse” styling, it seems to promise much. As you might have guessed, we put one through its paces to see just what it can deliver.

On the surface, using a mouse is a very straight-forward affair. I mean, you put your hand on it, and you move it to move the cursor on the screen. You click on its buttons to enable certain functions. Simple, right?

I’m of the opinion, though, that using a mouse, like most other peripherals, is an exercise chock-full of subtleties and nuance. It’s a very individual kind of experience. Beyond the most universal and absolute aspect of using any kind of hardware â€“ does it work the way it should? â€“ a reviewer’s description of the experience of using that hardware tends to be unique to whoever is using it. What’s great for one user may not necessarily be so for another.

In terms of ergonomics, the Force M9 ICE is comfortable to use, especially if your hand is just the right size for it. It’s definitely one of the bigger wireless mice I’ve had my hands on. Speaking of hands, mine is just a little bit too big for the Force M9 ICE for me to deem it personally perfect, but it’s not a disastrous mismatch; it’s not like I have King Kong-sized mitts and I’m holding on to a pebble. I have to adapt my grip on it somewhat, but never to the point where it made my hand, fingers, or wrist hurt even after hours of use. The sticky rubber grips on its flanks feel lovely and reduce the chance of losing one’s grip on the mouse. Sans batteries, it is freakishly light; once you have the AA batteries installed, though, it feels satisfyingly meaty.

I also like its shape: Its sculpted side surfaces scream “gaming mouse” more than the typical, boring utilitarian mouse that looks more like a worn bar of soap. Most non-gaming mice that I’ve seen, even wireless models like the Force M9 ICE, are nondescript. 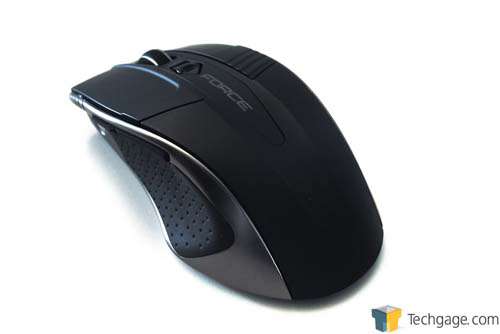 Button placement is also mostly good. The two main buttons and the scroll lock button are right under your index and middle fingers, and the two thumb buttons are well-placed as well: Your thumb only has to reach up a few millimeters to press either one, and you won’t mistake the forward button from the rear one.

The only issue I would care to make a bit of a gripe about is the almost useless right flank button. To reach and press it with either your ring finger or your pinky, you have to shift your grip on the mouse. Someone with longer fingers or a more flexible right hand might manage it without shifting his/her grip on the mouse, but speaking for myself I’m glad that that particular button is not tied to any essential functions by default. You can completely do without that particular button and not miss it.

While button placement is mostly positive, the actual feel of the buttons is where I feel let down. Both the left and right buttons, the two most essential on any mouse, feel annoyingly vague. They are very light when you click them, but you’re never sure that your inputs are registering. The travel on both buttons is very short, the action very light. For a peripheral that depends so much on getting the tactile experience right, this is a hugely disappointing finding.

I feel that to ensure you’re clicking the buttons well enough to register the input, you have to be more forceful with your clicking than I’m intuitively used to. Repeated hard clicks can be tiring on the fingers over an extended period of time. It’s a peculiarity that’s thus far unique to this mouse. What makes things even more disappointing is that the rest of the buttons feel quite good to press, with the appropriate degree of resistance and good button travel. The scroll wheel, in particular, is noteworthy, with a very good balance between resistance and lightness of action. 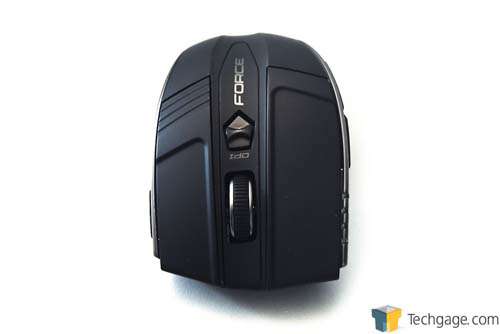 The Force M9 ICE is good in everyday use. From the most mundane tasks to the more involved (gaming, specifically), it works fine. The max DPI setting of 2000 is good enough, even for FPS games. Also, the ability to change DPI settings on-the-fly is a boon (though this is hardly unique for mice these days).

I do have to report a strange phenomenon that occurred randomly on both my desktop and my laptop: Sometimes the cursor would either just freeze on the screen despite the fact I’m moving the mouse, or it would jump to a random position. This occurred on both machines, both with and without using the Sim software; the weird random behavior also did not discriminate as far as what surface the mouse was being used on. It also doesn’t matter what type of application you’re using. It happened while browsing the web; it happened while I was working on a writing project; it even happened while I was playing Crysis 2. A friend theorized that this might be due to the mouse’s laser sensor’s predictive properties being too aggressive. Personally, regardless of what the cause of the behavior is, it’s very weird and it’s very annoying.

The GIGABYTE Force M9 ICE has many things going for it. Priced at $49.99 on most e-retailers, it’s not too expensive. Though it’s placed in the company’s mobile mouse product line, it’s styled more like a gaming mouse, so laptop users who want a flashy mouse to replace their touchpads would see this is as a viable option. Moreover, the Sim software is functional and nothing more: You can’t accuse GIGABYTE of giving you unnecessary bloatware just to let you use its product, although you would need Sim to unlock all of the mouse’s capabilities.

Having said that, though, it just has a few too many flaws that prevent me from giving it a fully favorable review. I might be willing to forgive its bad button feel with the left and right click buttons, but I cannot do the same with the weird cursor position freeze/jump that occurs randomly. It’s likely a software-based issue, so that’s something GIGABYTE can work on. Or it could simply be a problem that exists just on my review sample. Whatever the case, it’s a serious flaw.