It’s no secret that the popularity of motherboards in the Micro ATX form factor has seen a huge boost in the last few years. Micro ATX motherboards make it possible to build a fully-functional PC on the cheap, thanks to the fact that they’re the exclusive domain of integrated-graphics chipsets, which eliminate the need for discrete graphics acceleration when 3D gaming performance isn’t an absolute necessity. Simply add a case, PSU, hard drive, optical drive, and your choice of CPU and memory, and you’ve got a machine that can – at the very least – get you off the ground.

However, Micro ATX motherboards have never truly been thought of as cutting-edge technology – at least until recently, with the huge popularity of the Home Theater PC concept. The compact size of Micro ATX motherboards is the real draw here, since HTPC chassis designs typically attempt to stay within the dimensional constraint of other home A/V gear. The concept is that a home theater PC should be able to fit in a rack of typical a/v gear and not look out-of-place. While we’ve seen a few HTPC chassis designs that can accommodate full-ATX boards, the fit is almost always extremely cramped, or else the enclosure is large enough that it won’t fit in with other gear.

This popularity of Micro ATX motherboards for home theater PC use has prompted several manufacturers to design new Micro ATX motherboard models that are completely fitted out for the purpose, with newer high-performance IGP chipsets from NVIDIA (the nForce430/Geforce 6100 series) and AMD (their new 690G), as well as multiple types of onboard video output for connecting directly to a variety of televisions. The two IGP chipsets I’ve mentioned above are capable of hardware-accelerated HD-resolution video decoding, and can even handle the lightest of 3D graphics duties (such as the visual effects in Vista’s Aero Glass interface), and even some gaming, if you don’t mind sticking to older titles like Counter-Strike: Source. 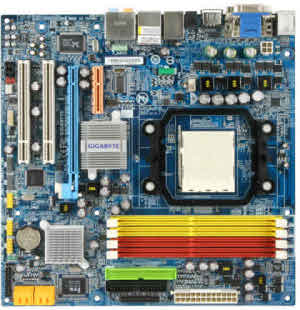 Gigabyte’s GA-MA69GM-S2H is just such a motherboard. It’s a Socket AM2 motherboard, based on the relatively new 690G chipset from AMD (which began life at ATI as the Radeon Express X1200 chipset, but finally saw the light of day under AMD’s ownership as the Radeon Express X1250). The 690G IGP’s performance is on par with the previous favorite for HTPC builders, NVIDIA’s GeForce 6150, but even beyond the chipset, this new motherboard from Gigabyte looks to be a nicely rounded performer. 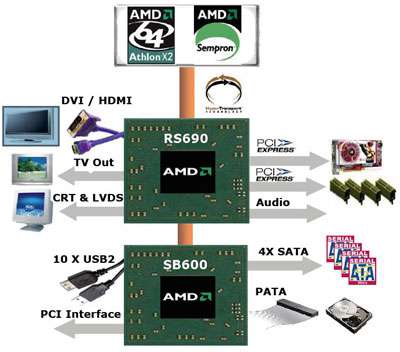 Among the other features that make the GA-MA69GM-S2H such an attractive option for Home Theater PC builders are its on-board HDMI connector and optional YPbPr and S-video component output (by way of an expansion slot module). With an adaptor, the S-Video output can be converted to composite video, for a grand total of 6 different video output connections. The board can also drive its HDMI and component outputs simultaneously. Add to that a 7.1-channel onboard audio chipset with Toslink digital output and the ATI chipset’s AVIVO processing (which includes hardware decoding for H.264, VC-1, MPEG-2, and WMV9 video formats for reduced CPU overhead), and this is a motherboard built from the ground up to serve the needs of HTPC enthusiasts.