The BIOS of the GA-MA69GM-S2H motherboard is based on AWARD bios software, and offers an impressive array of tweaks (and a few bombs as well). Let’s start at the top (level). 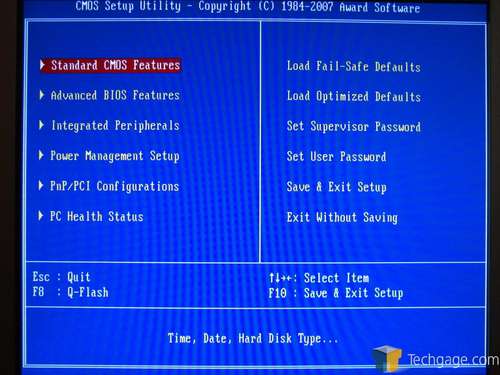 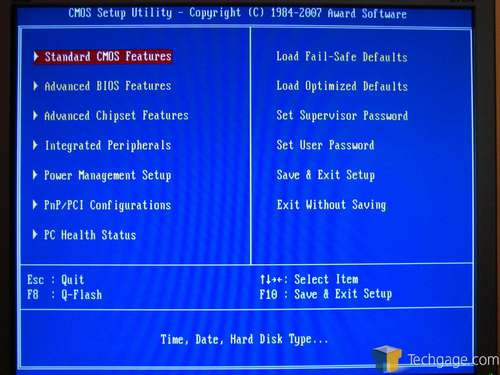 The Gigabyte board’s BIOS structure experiences a duality of sorts, in that its advanced options (like overclocking adjustments – the tweaks we’re really interested in) are hidden. It’s like a secret club – if you don’t know the secret handshake, you can’t get in. This, for one thing, is silly. Gigabyte is a brand that services the DIY enthusiast market first and foremost, so it’s hard to imagine why Gigabyte feels they need to hide advanced options from their users – most enthusiasts know what they’re doing, or at least know enough to know that they don’t know. At any rate, the ‘secret handshake’ to display advanced BIOS options is CTRL+F1. Press that key combination, and the “Advanced Chipset Features” menu entry appears. 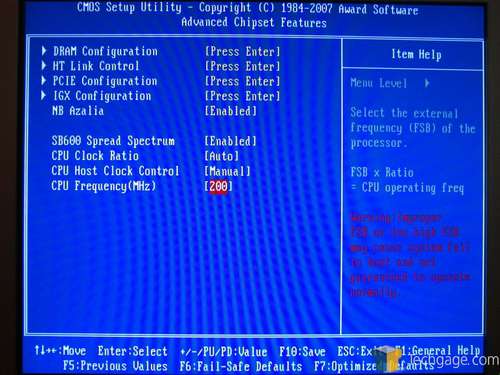 The “Advanced Chipset Features” menu contains all the most meaningful tweaks you’ll make to this board – memory timings, FSB speed, CPU multiplier, HyperTransport and PCI Express bus controls, and tweaks to the IGP. Directly from this menu, you can make changes to the CPU operating parameters such as FSB speed and multiplier, but the GA-MA69GM’s overclocking abilities are hindered by the inability to adjust the CPU voltage. Testing was performed with an ‘energy efficient’ CPU that’s likely to be used in a home theater PC, but AMD’s energy efficient 65W processors operate at a lower voltage than their 89W counterparts, and the inability to adjust CPU voltage severely limited our ability to overclock either the 65W Athlon 64 X2 4200+ EE or the 45W Athlon BE-2300 that we also had on hand. 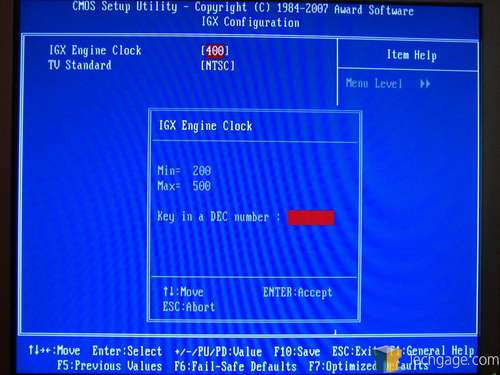 The IGX Configuration section of the Advanced Chipset Features menu allows adjustment of the IGP’s clock frequency. This is a good thing, because we couldn’t use our old standby ATITool to adjust the IGP speed from within Windows. While LegitReviews was able to overclock their ASUS 690G-based board’s Radeon X1250 IGP to 525MHz without artifacts using ATITool (an ability that was locked out by a later bios release), the IGX Configuration menu of the Gigabyte board allows the IGP’s clock frequency to be independently raised to 500MHz, without affecting any of the other components of the RS690 northbridge. Indeed, we found our IGP ran just fine at this frequency, though all testing was done with the IGP running at its stock speed of 400 MHz. 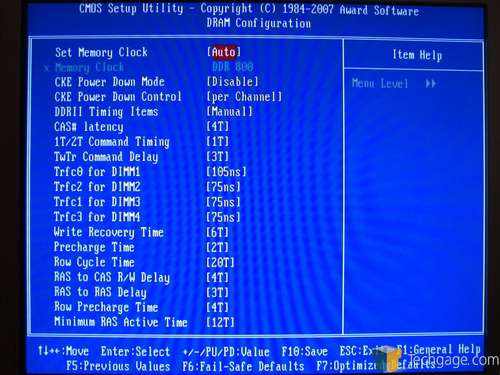 The DRAM configuration section of the Advanced Chipset Features menu allows adjustments for memory clock speeds and timings. Gigabyte has provided every feature you could want for tuning your memory for maximum performance…except voltage selection. As with the CPU, you may find your memory overclocking options narrowed somewhat by the exclusion of memory voltage controls in the BIOS. 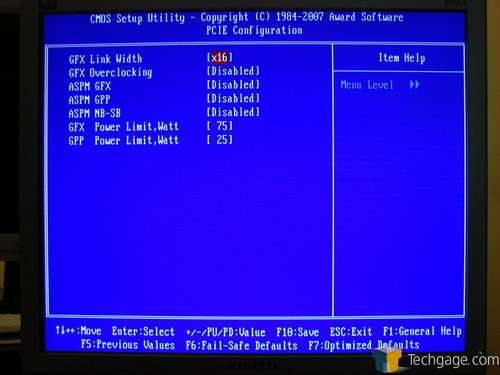 Gigabyte’s BIOS also throws in advanced configuration options for the PCI Express bus and HyperTransport link. The settings labeled ‘GFX’ actually affect the PCI Express 16 slot on the motherboard itself, while the settings labeled ‘GPP’ refer to general-purpose processors such as Ageia’s PhysX (though the promised PCI Express variant of the card hasn’t surfaced yet). Settings for the HyperTransport link are also tweakable as well for maximizing things like memory bandwidth. While the casual overclocker may not have much use for these settings (with the possible exception of the ‘GFX Overclocking’ option), more adventurous enthusiasts will appreciate the added flexibility they offer. 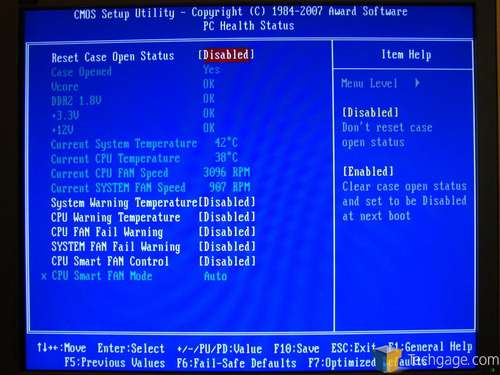 The familiar PC Health Status screen (accessed from the main menu) displays temperature readings from various heat-affected motherboard components, in order to ensure that safe temperatures are being maintained. The GA-MA69GM-S2H motherboard supports smart CPU fan control to keep operating noise at a minimum while providing cooling on demand, however no additional channels of fan control are provided for the single case fan header. For advanced fan speed control settings, you’ll need to use the provided EasyTune software.

Next, let’s take a look at the Gigabyte EasyTune control program. 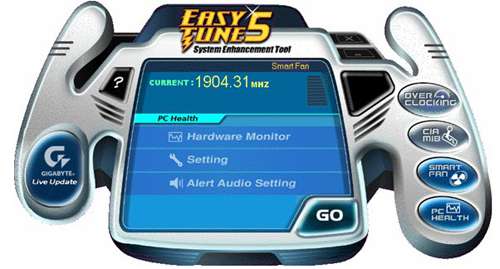 The main screen of the EasyTune utility displays the current CPU speed and available options. Not all of EasyTune’s available options are supported by all Gigabyte motherboards, so those options that are unavailable are grayed out and inaccessible. On a system using the GA-MA69GM-S2H motherboard, the initial display is the PC Health section, which allows access to the Hardware Monitor screen, as well as configuration of alarms and monitoring settings. 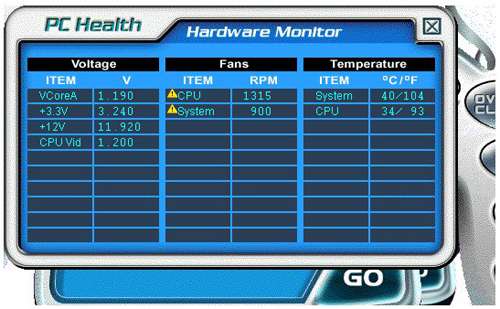 EasyTune’s Hardware Monitor consists of a tabular-format display that organizes PSU voltages, component temperatures, and fan speeds.. Unfortunately, there are no data-logging functions, so you’ll need to watch this window like a hawk while testing your CPU under load. If you use low-speed case fans (like we did), you might see an alarm in that section of the table, but the alarm threshold can be lowered to 0 if desired, or disabled altogether. 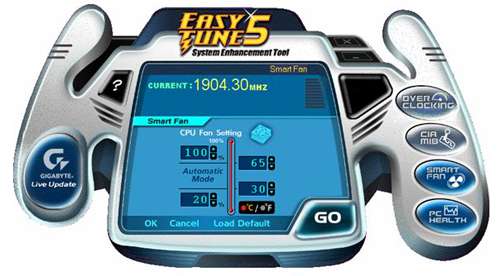 Advanced fan speed control settings may be changed from the Smart Fan section of EasyTune. These options include turn-on voltage, turn-on temperature, maximum voltage, and the maximum temperature point. The BIOS then adjusts the CPU fan voltage along a linear curve between the two points defined in software. This is a more tweakable fan control feature than we’ve seen on many motherboards at this price level. However, these advanced options aren’t available from the BIOS, which only allows the smart fan control to be enabled or disabled.

Now that we’ve taken a look at the hardware and software features of the GA-MA69GM-S2H motherboard, let’s look at some performance results.