We posted our first X48 review just two weeks ago, but you can expect many more in the weeks to come, as we have somewhat of a stockpile. But today we will be focusing on one, Gigabyte’s X48T-DQ6, a serious enthusiasts offering that promises the ultimate in performance and features.

Last fall, I took a look at Gigabyte’s GA-X38-DQ6 which is close to identical to the one we are looking at today. Besides the minor color changes on various components, the primary difference is the chipset. This is not much of a surprise, however, as X48 itself isn’t a brand-new chipset except with the name. It takes X38 and adds a native 1600FSB setting… and that’s about it.

We found the same to be true for the ASUS P5E3 Premium WiFi-AP @n that we posted a review for earlier this month. The board in itself was near-identical to the P5E3 Deluxe, except for absolutely minor changes, such as the different-colored shields on the heatsink. Other than that, they were identical.

The lack of differences is something that should be stressed, because the fact of the matter is, most X48 boards are identical to their X38 predecessors, in both features and capabilities. X48 might open up a native 1600MHz FSB, but I’ve never come across an X38 board (or P35) that couldn’t hit at least 470MHz FSB with a Quad-Core. So native or not, it’s not as though X48 allows more breathing-room. The parts will be better binned, though, but I’m not confident that real differences will be seen, even with overclocking.

Gigabyte and ASUS are the two main players right now, and for good reason. Both companies are massive, so they can easily afford cases upon cases of Red Bull for their R&D departments. All the rage lately is for power savings, which Gigabyte wraps into a “DES” (Dynamic Energy Saver) technology on their boards. ASUS has EPU, which has similar goals in mind.

Both companies are in a debate right now, as Gigabyte recently invited a bus-load worth of the media to a private event in Taipei. There, Gigabyte railed ASUS for their “lies” and useless EPU. They even went as far as to say EPU is “fake”. I wish I were able to spread the press materials that we were given (I was not at the event, but received the documents afterwards), as they are a humorous read.

But that’s a topic for another article. Once we receive a P45 Gigabyte board, then we’ll put their DES against EPU on the ASUS P5Q Deluxe, to see who reigns supreme. 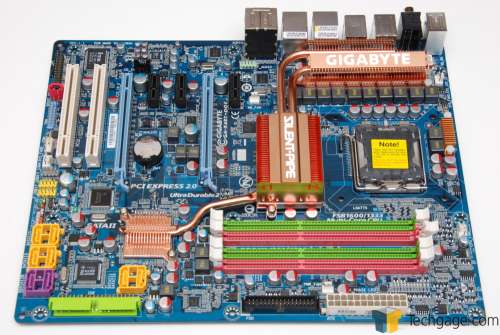 The X48T-DQ6 is Gigabyte’s highest-end X48 offering, so they didn’t skimp on anything. A 12-phase power solution is used here, which helps with efficiency, but not so much with overclocking, as we’ll see shortly. Two PCI-E slots are included for those with dual ATI cards capable of Crossfire mode, and the connectivity options are quite good.

For improved power efficiency, the board includes high-quality components, such as Ferrite Core Chokes (comprised of iron oxide to hold energy longer), lower RDS (on) MOSFETs (to produce lower switching resistance) and Lower ESR solid capacitors, which are designed to last far longer than standard capacitors.

Available are eight S-ATA ports, all the various headers for extra connectivity, and eight USB ports available on the back panel. If you connect the two USB ports on your chassis, you will have ten to deal with. That’s about six more than I actually have the need for, but for those with numerous peripherals, it’s a welcomed number.

On top of that, the board boasts DDR3-1900 speeds, which means hitting a 475MHz FSB overclock should be no problem at all. The “DDR3-1900” may be a bit conservative, since we’ve rarely seen an X48 board that couldn’t do 500MHz quite reliably, but it’s better to be safe than sorry, as they say.