If there is one thing Gigabyte does well with their products, it’s mastering the art of eye candy. Everything from their box art to the components on their products are designed to be eye-pleasing, and while such a thing doesn’t matter in the grand scheme of things, it’s nice to see such attention to detail.

As mentioned moments ago, the board includes support for eight S-ATA ports, one floppy and one IDE. The bottom six are handled by the ICH9 Southbridge that comes paired with X48, while the top two are courtesy of the Gigabyte SATA 2 chip, seen in the picture. 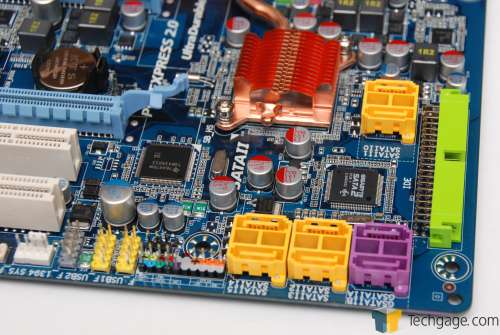 Support for RAID 0, 1, 5 and 10 are handled by the ICH9, while RAID 0, 1 and JBOD can be accomplished with the top two ports, with the help of the SATA 2 chip. In the above picture, you can also see the small but efficient Southbridge heatsink, which sports a nice design.

For some reason, it’s still popular to use PCI-E 1x slots to fill up a motherboard, even though most people will not use more than one right now (if any at all). Besides those, there are two PCI-E 16x slots for dual-GPU operation and also two generic PCI slots for classic peripherals. 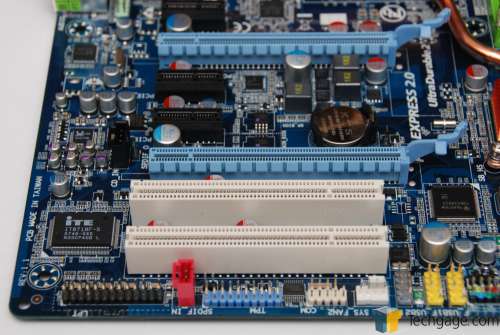 I do wish the layout was a little different here. Since no one will use all three PCI-E 1x slots, the two PCI-E 16x slots should be shifted up one spot, leaving one PCI-E 1x above the first PCI slot. That would allow two GPUs with dual-slot coolers to be used, because as it is right now, using such cards would block off one PCI slot.

I’ll jump to conclusions and just assume that there are far more people who could fill up two PCI slots than there are that would use all three PCI-E 1x, so this layout is kind of frustrating.

Here you can see the north and south bridge heatsinks. The NB portion is slightly larger than what we saw on the GA-X38-DQ6, but not by much. 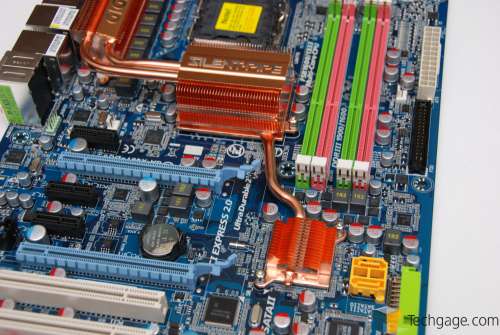 For some reason, I have a sudden craving for watermelon. And I don’t even like watermelon. 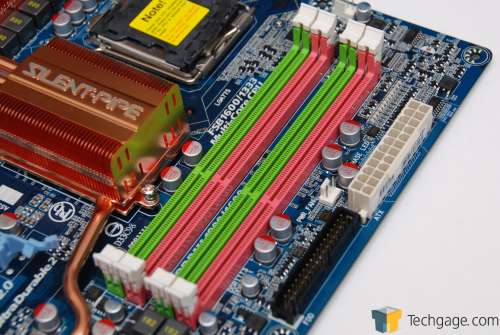 It seems so petty, but believe me, it’s more difficult than it needs to be. 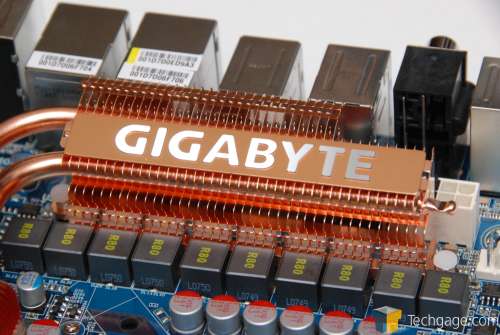 On the back, we’ll find numerous connectors… more than most motherboards I’ve come across. Besides the eight USB ports, we have dual PS/2 keyboard/mouse ports, S/PDIF outputs, dual Firewire, dual LAN ports and also the audio, which is powered by the Realtek ALC889A chipset. 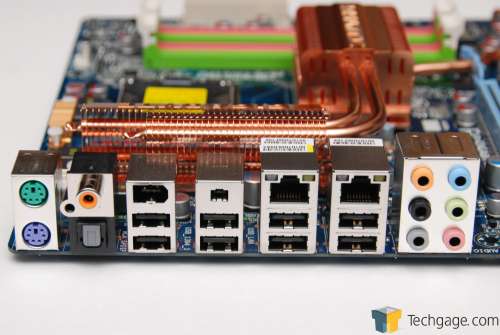 Besides the obvious accessories, two storage add-on accessories are included, which avail you a total of four e-SATA ports. These could be installed where a PCI-E 1x slot appears, since it is likely to remain unused anyway. 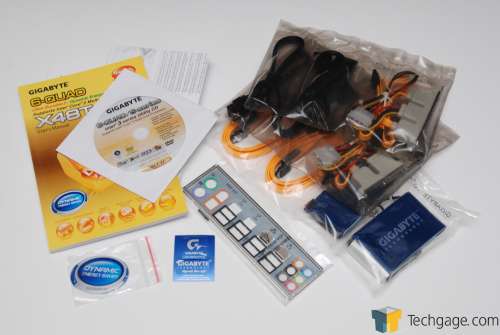 Gigabyte did a fair job with this board. It’s feature-packed, includes accessories that are not found on other boards, and includes a staggering eight USB ports on the back panel. The big gripe I have is with regards to a few layout features. I really dislike the 8-pin motherboard connector being located where it is, and the same goes for the needless abundance of PCI-E 1x slots, which will rub those who plan on a dual-GPU configuration with cards that use dual-slot coolers the wrong way.

Other than those two things, the layout is good overall.