When I first received this card, I wasn’t that impressed… without even touching it. After all, this is a year-old card that has simply been overclocked. What’s there to get excited about? In this case, excited isn’t the proper word to use, that’s for sure, but Gigabyte has really done well with their Super Overclock series, and this card is proof of that. It might be a year-old design, but given today’s current pricing from NVIDIA, it proves to be a deal, even at $199.

At that price, it costs about $20 more than a stock GTX 260, but on the other side of the token, it costs at least $20 less than a GTX 275. The key is that despite falling in the middle price-wise, it beat out the GTX 275 in over 90% of our game tests. So, given this card here, there looks to be little reason to even bat an eye at the GTX 275 at all. This is less expensive, and faster. It’s not too difficult to figure out what makes sense here.

The exception might be for overclockers, because it could be that the GTX 275’s higher bins and improved Shader core count would beat out this card when you are talking overclocked vs. the Super Overclock. That’s not surprising, but it again comes down to price, and what you want to spend. Then of course, if you want to overclock the Super Overclock even further, you may just hit GTX 285 performance – which we did in a couple of the games. 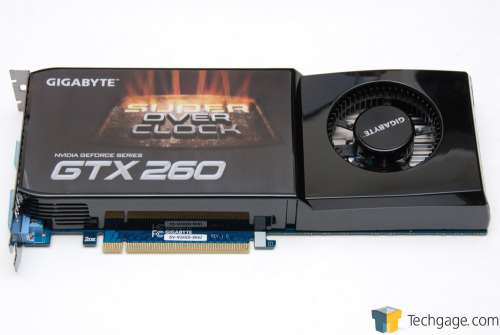 Is Gigabyte’s card a hands-down winner? At this point in time, it is, without question. That simply can’t be argued. Their card is faster than a more expensive GTX 275, and anything else at $200 for that matter. The problem lies in the fact that ATI’s HD 5700 series cards are right around the corner, and they may very well change the value of this particular card up quite a bit. It’s hard to say right now, not having tested the card (nor being able to disclose information due to NDA), but it’s something you’ll want to keep in mind.

To be safe, I’d recommend waiting another week or two and see where things stand then. Hopefully it won’t take too long after the HD 5700 series launch to see Gigabyte release some Super Overclocked versions of those cards. Speaking of “Super Overclock”, though, Gigabyte actually does do well to have these cards live up to the name. So far, their GTX 260 and GTX 275 cards are the highest overclocked currently being sold (and they are available). Hopefully we’ll see this series continue.