For the sake of CPU stress-testing, we use LinX. Compared to other popular CPU stress-testers, LinX’s tests are far more gruelling, and proof of that is seen by the fact that it manages to heat the CPU up to 20°C hotter than competing applications, like SP2004. Also, LinX is just as effective on AMD processors. Generally, if the CPU survives the first half-hour of this stress, there’s a good chance that it’s mostly stable, but I strive for a 12 hour stress as long as time permits.

I admit, and have admitted in the past, that I’m not much of an overclocker. It’s not that I don’t enjoy it, but rather that I feel like I’m not that good at it, and also that I never seem to achieve a truly impressive overclock. So when I sit down to test out the overclocking-ability of a new motherboard or CPU, I usually expect little more than a 4.0GHz overclock, since it’s been rather typical up to this point. But with the H55M-USB3, I quickly realized that there’d be no simple 4.0GHz overclock here. Oh no… not at all.

After a couple of hours worth of tweaking, and I mean very simple tweaking, I ended up hitting 4.55GHz which proved to be about 50 minutes LinX stable, twice over. The reason I did it twice and not straight through, was because believe it or not, doing the first run Windows 7 ended up putting the PC to sleep after about 40 minutes (usually I disable these power modes, but I forgot on this particular install), so I felt it necessary to let that finish, then start over for double assurance. 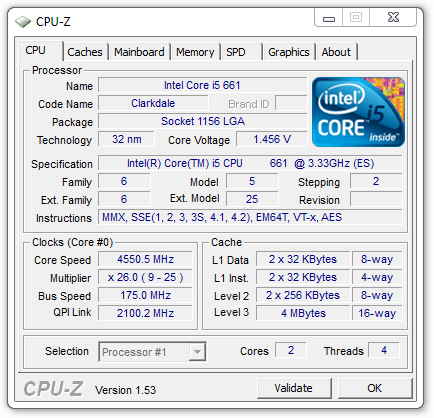 To my knowledge, this is the highest overclock I’ve ever hit “stable”, even for a dual-core. I’ve often been able to reach sky-high clocks, but rarely will one ever pass through a stress test for even a minute, but this one here lasted almost an hour, twice! To be fair, it did require some extra voltage (1.4375V), but never did the CPU cores hit even 90°C (I am used to them hitting the red-line, which tends to be around 100°C).

I’m beyond impressed with the overclocking performance seen here, and after all is said and done, I’m fairly confident the board and chip could have been pushed a bit further. Unfortunately, I had to cut my OC’ing session a bit short due to other testing that had to take place. But with about the same amount of effort, I gained about 210MHz over what I could achieve with ASUS’ P7H55D-M EVO. That’s rather impressive.