This past weekend, Gigabyte held the last of the GO OC 09 regional finals, which had the goal of finding a North American qualifier to compete in the worldwide final, which will be run during Computex in June, in Taipei, Taiwan. We’ll get to the winner soon, but first, let’s take a look at what the event is all about, what its goals are, and what makes it cool and noteworthy.

Although a countless number of vendors tout overclocking features on their products, Gigabyte is one of the few to put their money where their mouths are and have actually developed an entire event to help promote the overclocking lifestyle. And since their motherboards are increasing in popularity within overclocker circles, the company obviously wants to capture the moment and make sure people choose their products when purchasing a new computer component.

To lead up to this past weekend’s regional final, which was held in City of Industry (Los Angeles County), Gigabyte has held various other regional finals around the world, with the intent of finding the best of the best from each region to compete in the final. The North American event is of course the most interesting for us since it’s more local, but it’s also cool in that we can see familiar overclockers get down and dirty with their elaborate setups. 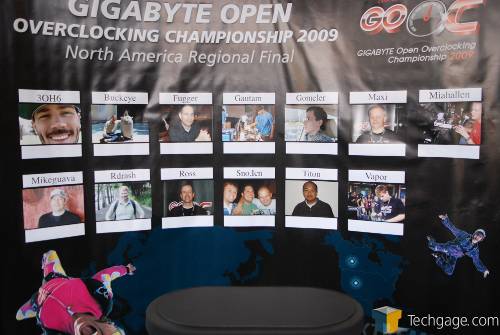 For each event, Gigabyte themselves scour the web for some of the most promising overclockers out there. But, since they care about the community, they don’t simply pick and choose the best, but rather choose people based on various factors, with the community aspect playing a huge role. If you’re a great overclocker but never participate in online forums or simply troll, they may not be too interested. 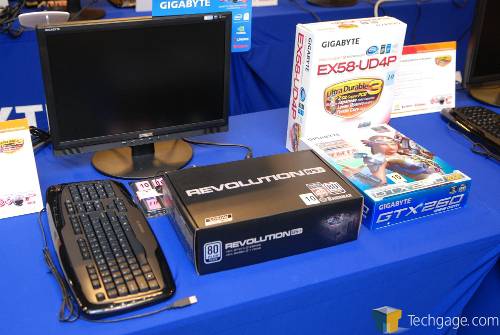 Whereas top overclockers normally break world records with their own hardware, this competition was designed around fixed configurations, and if Gigabyte developed a particular component, it was used. Here, this included their EX58-UD4P X58-based motherboard, their GeForce GTX 260 graphics card (with the help of NVIDIA, it seems) and also their new keyboards and mice. 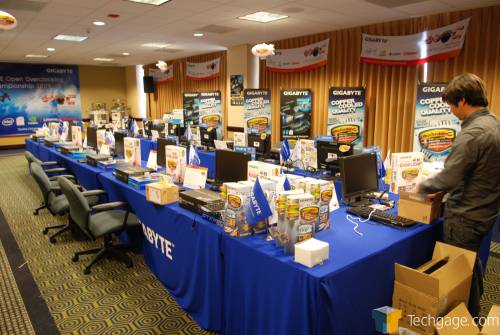 Aside from the fixed hardware, contestants had few rules. Debugger cards were not allowed, however, as like other serious overclocking competitions, contestants are expected to overclock based on pure skill, and if a problem arises, they’re expected to be able to fix it themselves. Seems fair, and given how knowledgeable these guys are with hardware, debuggers are hardly ever needed anyway.

Each overclocker was also able to use their own liquid nitrogen (LN2) pot (CPU cooler), with K|ngP|n’s Dragon F1 Extreme Edition being one of the most popular (it comes at a price, but it’s effective and easy-to-install). Coupled with the over 400 litres of liquid nitrogen sitting in the back of the room, we all immediately knew that some hardcore overclocking was going to soon go down, and lots of it.