Aside from the competition itself, Gigabyte found a way to kill some of the media’s time by allowing the event’s sponsors to give mini-briefings about their products in a separate room. Each one of the sponsors took advantage of this, and we were treated to quite the deluge of information, some of which we were already familiar with, and a bit of what we weren’t.

The first speaker to take the stage was Intel’s Performance Analyst Francois Piednoel. It’s wise to ignore his title, however, as it severely underwhelms just how much he takes care of. Francois is one of the brightest in the business, and he’s the furthest thing from being a marketing guru. Rather, his passion for hardware and technology shine through when you talk to him, and it becomes clear quick that he really, really knows what he’s talking about.

But he knows a lot about the small details with Intel products, and we don’t necessarily. So to help see just how much of a geek we all were, he presented 10 questions, that if answered correctly, made us an “Alpha Geek”. I won’t be ashamed in admitting that I only knew three out of ten answers. These were tough:

I’ll leave you to Google to find the answers, as I failed to write any of them down. 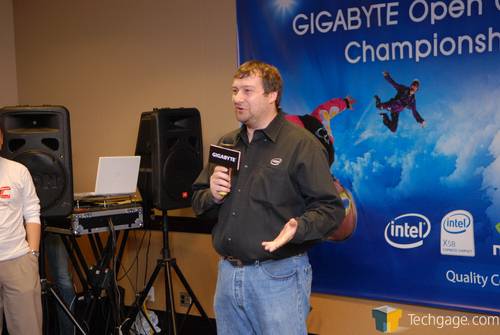 Francois then followed that with a quick briefing about Intel’s SSDs. He’s not a marketing manager, and he hates to come off as one, so he talked about things from a technical standpoint. Much of what was mentioned we knew about already, but he’s very confident that SSDs are going to become even more impressive as time passes.

Up next was NVIDIA’s talk, given by their Channel Sales Manager Jack Chen. Most of what was said was a complete rehash of what we’ve been told numerous times over the course of the past few months, and in truth, I could have easily worn an NVIDIA shirt and gave the same speech without needing a reference note, but, one member of the media did get him to cough up information about a possible single-PCB GTX 295. It’s being worked on, but if and when it will happen is up in the air. At least it’s on NVIDIA’s radar.

Mark Takunoff, Senior Technology Manager at Kingston gave a good talk about what he does and what Kingston’s goals are, although goals might not be that important when you are the world’s leading DRAM vendor. He’s a performance nut though, so he spends a fair amount of time in the lab tweaking their modules to see where improvements can be made. Not just desktop memory either, but even SODIMMs (which REALLY do need some TLC. Down with their low frequencies and high timings!). 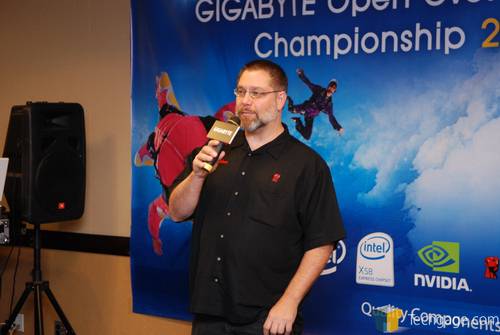 The final talk was given by Joerg Theissen, the Chief of Global Product Marketing at Enermax. I admit, I’m not the least bit interested in power supplies, but James did an incredible job of keeping things enlightening, and at the end of his speech, I had a newfound respect for their product. Did you know that some of their models are future-proof? Because they use 12-pin connections all around, if a new connector type comes out during the life of your unit, you can simply purchase that particular new cable, which last I checked, is far less expensive than purchasing a new PSU.

Overall, when I heard that there would be media briefings, I sighed, because after all, we’re briefed all the time, so what new were we going to hear? I was relieved when things were kept interesting though, so kudos to all of the presenters.