by Rob Williams on February 24, 2010 in Motherboards

Are you looking for the most feature-rich P55-based motherboard possible? With its P55A-UD7, Gigabyte looks like its up to the challenge. In addition to the usual slew of features we’ve come to expect, the UD7 includes a built-in waterblock, a Silent-Pipe add-on, 24 power phases, SATA and USB 3.0, four PCI-E 16x slots, and more.

Like most manufacturers, Gigabyte has long developed a line-up of motherboards to cater every possible price-range, from budget to high-end, and everything in between. But a couple of months ago, the company created a new series that looks to be for its most exclusive offerings. For good reason, too. The UD7 series of boards are destined sit atop the pyramid of models using a given chipset, and for that reason, they will prove to be not only the most feature-rich, but also the most expensive.

With the myriad of different motherboard models out there today, from all of the different vendors, it’s easy to become confused and lack the understanding of the differences between them all. To be honest, even I am stumped half of the time, because for a given chipset from a company like ASUS or Gigabyte, there are 12 or more motherboards to choose from. Of course, those boards also range from $100 – $300, making the entire situation even more confusing.

One thing I do know, though, is that when you see a “UD7” on a Gigabyte motherboard, you can bet that it’s going to be almost identical to the “UD6″ version of the same board. The main differences? For one, the layout may change ever-so-slightly, but primarily, the UD7 family of boards include a waterblock on the PCH with support for 1/4” tubing. The premium? About $30. It’s safe to say that if a fully water-cooled machine isn’t in your plans, the UD6 would likely be the smart choice.

In recent months, Gigabyte has given us something else to look out for as well… “A”. With the introduction of both SATA 3.0 and USB 3.0, the company had to help differentiate its boards, so the letter “A” was added to the end of the chipset model in order to denote that it includes both SATA 3.0 and USB 3.0. This boards also happen to belong to what Gigabyte calls “333”, which references both of these technologies, and also the fact that it delivers 3x the amount of power to the USB 3.0 ports for improved stability or for ease-of-use (not having to use an AC adapter to plug in a USB external hard drive, for example).

Being that the UD7 model is designed to be Gigabyte’s highest-end model for a given chipset (an X58A-UD7 is also available), it’s no surprise to see this one retail for $279.99 at popular e-tailers. To warrant such a high price, especially for a P55-based board, Gigabyte beefed up its P55A-UD7 to include all we expect from our motherboard, and tossed in a lot of trimmings as well.

As we normally do, let’s take a trip around the board at hand and see just what it’s made of, starting with an overall view. If one thing’s for sure, Gigabyte doesn’t like to differentiate from its motherboard’s color schemes all too often, and that’s likely one of the reasons that the different models are so hard to tell apart. But when you dig a bit deeper, you begin to see just what it is that makes the P55A-UD7 unique compared to Gigabyte’s other offerings. 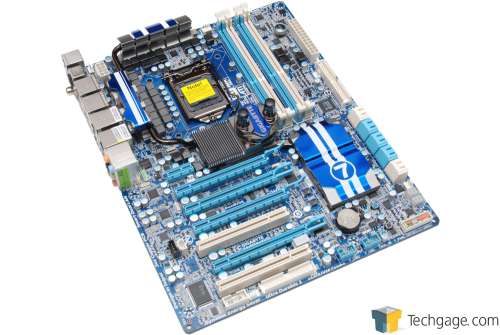 The first thing that jumped out at me when looking over the board was the cool racing-style “7” decal that graces the small chipset heatsink at the bottom right-hand corner. Since Intel’s P55 chipset rids out the need for a Southbridge, it can be assumed that underneath this shroud are chipsets for other purposes. One of these would be the PLX chip, which is designed to counter-act the lack of available PCI-E bandwidth in order to supply it to SATA and USB 3.0.

One perk of Gigabyte’s high-end boards is made obvious in this area as well. Along the side are 10 SATA ports, vertically-mounted for the easiest of installation. The bottom two white ones are for SATA 3 (they can also act as SATA 2), while the rest work only with SATA 1 and 2.

Although the UD7 has an on-board power button, it’s not shown in this photo. Instead, the two microscopic buttons seen next to the BIOS battery act as a reset button (black) and CMOS clear (blue). It would have been great to see these buttons a little larger, and towards the top of the board where the power is, but either way, it’s nice to have the ability to both reset the PC and clear the CMOS with ease. 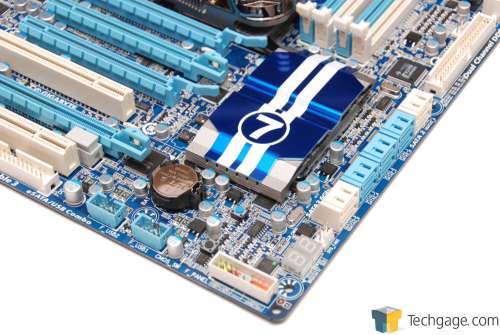 Like most other P55 motherboards on the market, the UD7 includes a total of 4 DIMM slots, with support for up to 16GB of RAM. I have to say that I am kind of surprised that six DIMM slots aren’t included here, a la P55A-UD6. That board is even less expensive, but includes more RAM support… it seems a little strange. This may simply prove that even Gigabyte realized that six DIMM slots is overkill for this platform, which could be why it opted for 4.

If you look to the right side of the DIMM slots, you can see two power phases. These are designed to stabilize the power throughput to the memory as much as possible, in order to give overclockers the best chance at an impressive DDR speed. Sure, they could be considered useful as well for those who simply want a smooth-running system, but the main goal for them would be overclocking, no question. 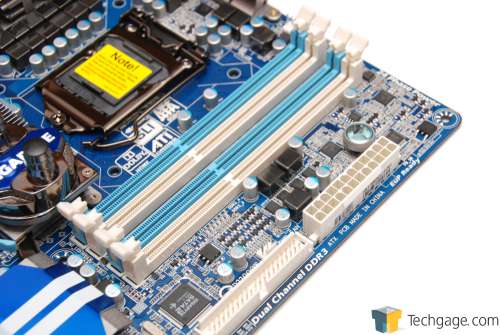 I admit, that being an occasional moron, I completely missed the board’s power button when I first looked towards the DIMM slots. But on a single angle, it jumped out at me. It could be the reflective surface, or it could be that I just don’t pay enough attention. What I do know, though, is that an on-board power button is one of the greatest motherboard inventions ever. If you’ve ever had to really tweak or troubleshoot your motherboard, you in all likeliness know what I’m talking about. 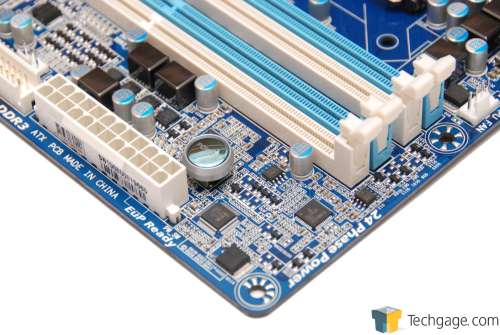 We’ll continue the “tour” around the P55A-UD7 on the next page, before diving into a look at the BIOS.