This past weekend, Gigabyte held its third GO OC NA final in Industry, California, and put fourteen of the best overclockers together in the same room and let them loose on Intel’s Core i7-980X processor and Kingston’s HyperX memory. We were there and have all the info, and more pictures than you can shake a memory stick at.

What do propylene, propane, butane, petroleum jelly, and electric hair dryers all have in common? All were present in high quantities at the Gigabyte GO OC 2010 North American regional overclocking championship, obviously! This past weekend Gigabyte hosted its third GO OC event running, where twelve hardcore overclockers from Canada and the United States sat down to a table full of new hardware and an all-you-can-eat buffet of liquid nitrogen.

Gigabyte’s annual “GO OC” event was held at the Pacific Palms Resort in City of Industry, California just outside Los Angeles, and has become so popular as to even spawn similar events by other companies. For the 2010 season, regional events have been held for China, Pan Asia & Africa, Latin America, Europe, and North America. All of these regional events set the stage for the final, upcoming competition in Taiwan, where the top winners from each region will compete directly in the championship for prestige and some serious prizes. 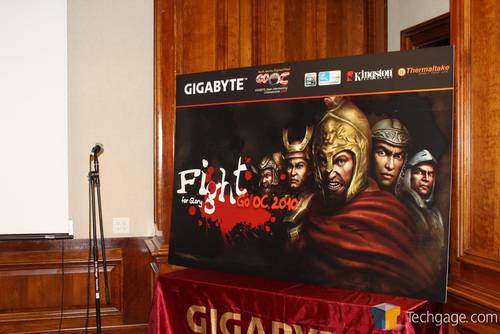 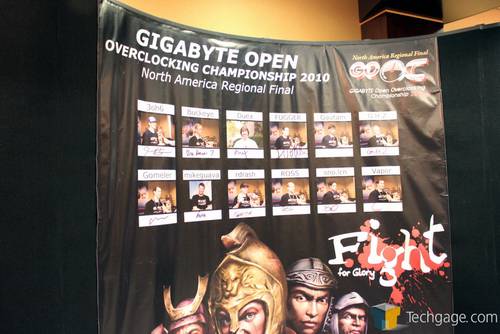 To keep things even as possible, each contestant starts with the same cornucopia of new hardware that would make anyone swoon. Gigabyte provided its own X58A-UD7 motherboards, monitors, mice, keyboards, and GeForce GT 240 graphics cards. Kingston was showing off its 64GB SNV425 series SSDs and a screaming fast triple-channel, 6GB HyperX 2000MHz CAS 9 memory kit. Intel naturally provided the ES grade processors, although this year they were the well-regarded Core i7-980X Extreme Edition models. To keep all of this powered Thermaltake was showing off it stalwart Toughpower 1200W beast of a power supply. 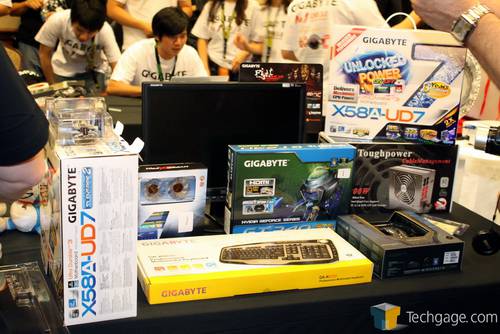 Entrants were allowed to bring their own choice of liquid nitrogen (LN2) pots that prevent the CPUs from frying instantaneously at settings at or even beyond two volts, but debugger cards, other forms of cooling, and other hardware other than what is provided wasn’t allowed.

If a problem arises (and plenty did!) then contestants are given one chance to replace the hardware. Due to the fickle nature of processor overclocking, all contestants have the option to request trading in their CPU for another held in reserve, but once done for better or worse they are stuck with the exchanged CPU.

August 13, 2010 Addendum: Some paragraphs and wordings were changed on this page after posting at Gigabyte’s request.