Are you a classic PC gamer looking for a new place to pick up some games? Enter GOG.com. This service currently offers well over 100 titles spanning nearly twenty years, and all are offered at reasonable prices. To make the deal even sweeter, in addition to included perks for each game, there’s absolutely no DRM to be found across any title.

Late last week, Brett posted an editorial which takes a look at the current state of the video game industry. He explores the current challenges facing gaming as a whole, and offers solutions and strategies on how to improve things. I highly recommend checking it out if you haven’t already. For the most part, we share similar ideas about current gaming, but what his article did most for me was re-instill my belief that older games were better… when graphics wasn’t the only thing that mattered.

Sure, some of this could be, and is, due to nostalgia… but not all. Today’s games are becoming more complex than ever, and most often, the graphics receive more emphasis than gameplay, and that’s not a good thing. Take a game like Portal, for example. Its graphics can’t compare to some of the more recent blockbusters out there, such as Crysis and Call of Duty, but that didn’t stop anyone from having an absolute blast with it.

For what reason was that the case? Gameplay, of course. When’s the last time you played through a game and immediately wanted to play back through? Titles like this are certainly rare, but Portal was one of those, and it’s because the developers focused on the gameplay, not the graphics (not that they were in any way poor).

More often than not, I’d quicker go play one of the classics than load up the latest blockbuster, and looking around various web forums, and also at games that still have unbelievable gamer support, it’s obvious I’m not alone. The fact is… classic gaming is never going to die, and that’s a very good thing.

Alright, I’m sure this article sounds more like an editorial up to this point, but it’s not meant to be. The reason I brought all of that up is because we’re taking a look at a game service from people who share the same passion for the classics. GOG.com, or “Good Old Games”, aims to offer PC games from all eras to you for a reasonable price, along with a few extra perks on the side. But what could make things even sweeter? How about the fact that each title is DRM-free? Yes, it’s true.

I first learned of GOG last fall, and finally got around to joining just two months ago. So far, I have to say I’m quite impressed with pretty-well every aspect of the service, but let’s not get into our conclusions quite yet! For what I’m sure are legal reasons, the company currently only offers games based on the PC platform, and for the same reason, I don’t see that changing soon. However, if a game was available on both platforms, it still has a chance to be launched on the service (MDK, Earthworm Jim and Flatout are current examples). 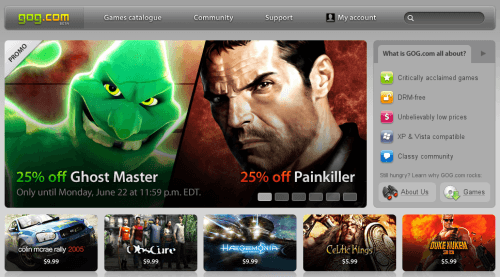 Taking a look through their games catalogue, you can see old games, older games, and some really old games. Surprisingly though, not all games sold are ancient… some are as new as four years. The service isn’t limiting themselves to only old games, but games that make sense to be on there. So you can expect that among such titles as Duke Nukem 3D, Fallout and Tex Murphy, you’ll also see some newer titles like Far Cry and Unreal Tournament 2004.

To keep things simple, GOG offers games at three prices: free, $5.99 and $9.99. At the time of writing, only three titles are free: Beneath a Steel Sky, Lure of the Temptress and also Teen Agent. I’d expect this list to grow over time, but it does make sense that the company would rather focus on their bread and butter. Of these dual prices, they seem to be split fairly evenly, and in my particular case, only one out of the eighteen games I’ve purchased so far has been $9.99.