Are you a classic PC gamer looking for a new place to pick up some games? Enter GOG.com. This service currently offers well over 100 titles spanning nearly twenty years, and all are offered at reasonable prices. To make the deal even sweeter, in addition to included perks for each game, there’s absolutely no DRM to be found across any title.

When the service launched last fall, they had 50 games to offer consumers. The current number is well over 100, and with the support of over 20 publishers (another list that’s growing), the company expects to release many more over time. Their goal is to release at least one game per week, and if it’s feasible, they’ll release two or even more. They also hold regular sales of select titles, so it’s worth subscribing to their newsletter, or at least making sure to check back to their website every week.

As I mentioned earlier, the service vows to offer a little more than just the games they sell, in way of downloadable content. This can vary from the game manual to wallpapers, but also include things like avatars, SMS tones, artwork, soundtracks and more. Each game page has a list of what’s included, and though not all of what’s offered is incredibly interesting or useful, perks are always appreciated.

After purchasing a game, it will be tossed on your virtual shelf, where you’ll be able to re-arrange them as you like. You could put the most frequently-used game at the forefront, or arrange them alphabetically like I did (indeed, I am capable of pulling this off!). From here, clicking on a box will bring up a pop-up with all related downloads, and also related information, such as support articles and forum topics. 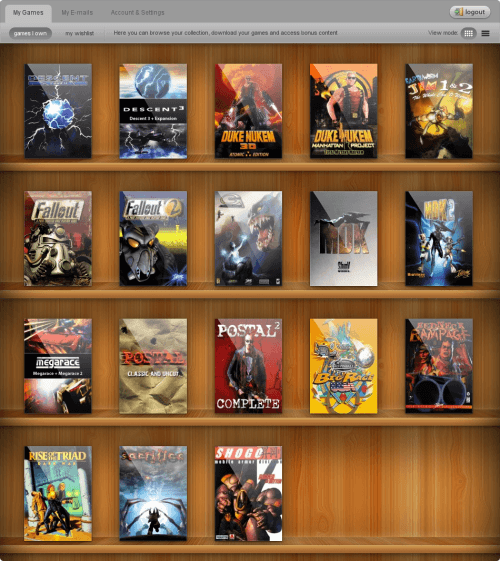 I personally prefer the alternate view mode, which is a simple list. With this mode, you’re able to quickly access a huge deal of information very quickly, including of course the downloads, your personal rating, the date you purchased it, and also related forum threads and support articles. 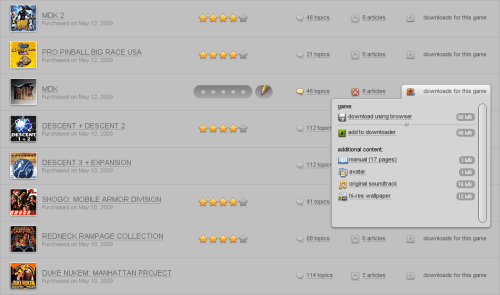 When choosing to download a game, you’ll have two options. As you’d assume, you can simply download the game you want with your browser, but another option is with GOG.com’s own downloader tool, built using the Adobe AIR platform. The company recommends this tool if you’re looking to download a huge file, or have an unstable Internet connection, and to be honest, even if you don’t fit into either category, it’s still a great tool. 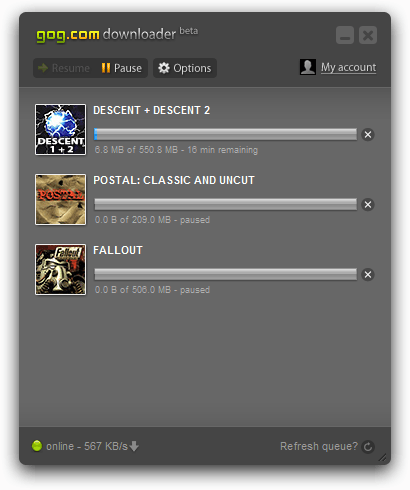 When browsing your purchased games, you can “add to downloader”. Once done, you can load up the downloader on the desktop, log in, and it will automatically begin grabbing all of the games you’ve previously added. And if your Internet cuts out right in the middle, the downloader will simply resume where it left off once the connection becomes active again.

To keep things congruent throughout the service, each game offered is bundled with their custom installer in lieu of the original. This is a good thing, because it’s clean, simple and works fast. One of the biggest issues of many Windows’ installers is that they like to go full-screen or play music that can’t be muted, but not here.

The process to install couldn’t be any easier. You simply agree to the EULA and let it do its thing. One hitch is a prompt to install a PDF reader of its choosing, which can get annoying if you have to install more than one game (or a bunch of them). You won’t receive such a dialog if you already have the reader installed (either Adobe Reader or Foxit Reader). 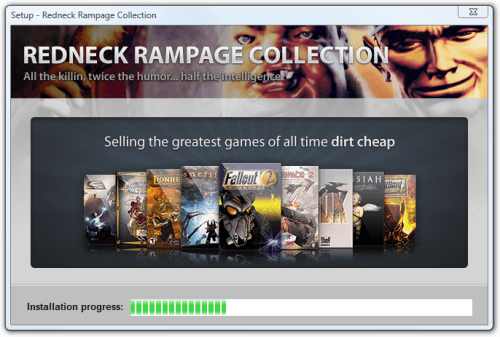 One of the best aspects of the installer might be the fact that it doesn’t leave a bunch of junk on your machine, including registry entries. The games themselves may change that, but the installers don’t. To make things even better, if you uninstall one of the games and it happens to be the last GOG.com title installed, it will also entirely remove the installation folder – something a lot of other applications and games don’t care to do.

For the most part, what you get when you install a game is exactly what you would have gotten with a store-bought copy. Each game is updated to the most recent version, but that’s about as far as the alterations go. Also, because many of the titles found on the service were originally intended for DOS, the company includes a copy of DOSBox with each game intended for that OS. To learn a little more about this tool, you can refer to our Game Emulation Under Linux article, or visit the official site.

DOSBox is a little complicated to use for non-techy users (or those who’ve never used DOS), but GOG.com makes the process simple… loading a game is completely seamless to the user. After a game is installed, a shortcut will appear on the desktop, and it will control the exact parameters needed to load the game through DOSBox. In all my tests, their shortcuts worked well and I’ve never encountered a problem. 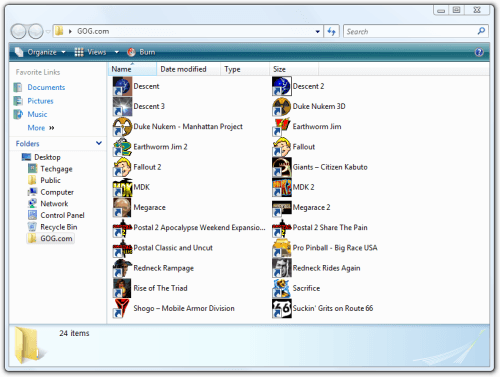 Although on the website, GOG.com boasts complete Windows support, they actually include the Linux version of DOSBox with each game that requires it. It’s an interesting move, because nowhere do they mention this on their website, but it’s there. Now, while the Windows shortcuts take care of everything, to use the Linux version of DOSBox would require a bit more work. In this particular case, you’d need to extract the archive provided, enter super user status, then run “./configure ; make ; make install”, without quotes. If all goes well, you’ll have a working DOSBox install.

Even easier would be to use your repository’s version of DOSBox, and in my experience, most repositories do indeed include this application. It should also be noted that DOSBox works with Mac OS X as well, in addition to other operating systems, so GOG.com’s games certainly go beyond just Windows. It’s up to you to figure out which games are DOS-based, however, as the site doesn’t tell you (as far as I can tell).