A lot of racing games start you from the bottom and lead you on the path to make a name for yourself, but in GRID 2, that’s just a side-effect. Here, you work towards building the biggest, best racing league around, and do so by racing all over the world. Go on… millions of fans are waiting.

I have a confession to make. Despite being a huge fan of Codemasters’ racing titles, the original GRID (aka: Race Driver: GRID) is one I skipped over – but there’s no good reason for it. I likely had other games hogging my attention at the time, because I did have some interest in it – I even implemented the game into our graphics card testing suite for about a year. Since the game’s launch, I’ve lightly regretted not giving it a fair go, but found myself unable to dedicate time to go back to it.

Well, with the impending launch of GRID 2, I decided to go back and play the original and quickly discovered why it received so many awards those five years ago. It’s a challenging game, to be sure, but it’s not a “sim”. The graphics are fantastic, as are the tracks themselves. My playtime there definitely helped whet my appetite for Codemasters’ latest. 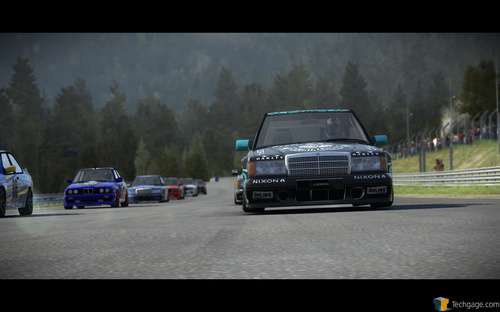 A battle of the classics.

Unlike a Forza or Gran Turismo, GRID 2 doesn’t aim for high-level driving realism. Instead, Codemasters implements a “TrueFeel” mechanic here, which aims to make the driving physics feel realistic but not require too much out of the gamer to succeed. Admittedly, I quite like this style – you might call it a cross between a Need for Speed and F1 (the former, which I find a little too unrealistic; the latter, which I find far too complicated).

The premise in GRID 2 isn’t too different from the original. You begin life as a lowly driver trying to make your name known, which will be done with the help of Patrick Callahan’s baby, the World Series Racing team and league. At the outset, WSR is nothing but an idea, but after you wow a couple of competing teams, you’re welcomed into the fray and WSR officially kicks off. As you progress, you will continue to get other teams on-board, and eventually, WSR becomes highly recognized and well-respected.

Codemasters went to town here to make sure that the entire concept of WSR seemed realistic. On occasion, you’ll see programme cuts from ESPN’s Sports Center, with the hosts talking about it as if it were a real thing (and they played their parts well). You’ll also get quick looks at social media and all of the buzz, such as with the example below. In time, you’ll even see a thread on the WSR forums dedicated to you – and I’d be lying if I said it didn’t put a grin on my face. 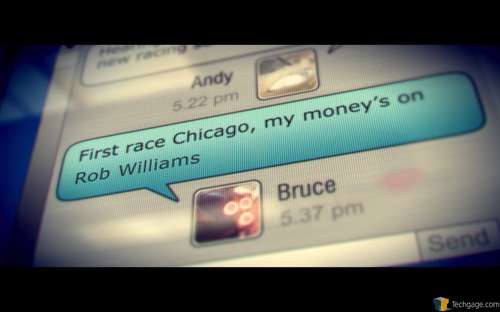 A user with great taste.

A beef that I have with many racing titles nowadays is that a lot of them love to confine you to a single city. Because many games are going the “open-world” route, I can understand that to a point, but that does result in a lack of variety. In GRID 2, we lose that open-world functionality (which is fine… the game’s design doesn’t support it), but in addition to US locations, you’ll find yourself in Côte d’Azur, Barcelona, Okutama and even Dubai.

Instead of confining all race types to the city, circuits and open-road events exist as well. I have to give major kudos to Codemasters for being one of the few developers to deem the Indianapolis Motor Speedway suitable for inclusion – when’s the last time it could be found in a racing title? 1989? Alright, – I’m sure it’s been featured in games since then, but I haven’t seem them.

Events include straight races, time attack, elimination, drifts, overtake, faceoff (rival battle), checkpoint, endurance and touge. Touge is an interesting two-part event where you go head-to-head with another racer; one time, you start just behind the opponent, and the other, you start ahead. In either scenario, if you outpace your opponent by more than 5 seconds, you are deemed an instant winner. This is very challenging, and is really only possible if your opponent happens to crash. 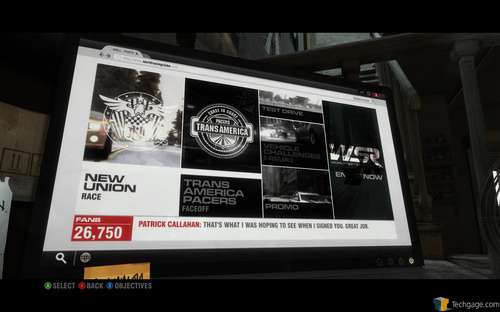 Each tier offers a large number of events.

Both the WSR league and the cars are split into four tiers. There are no licenses to earn (thankfully), so as soon as you reach a new tier, you get right into an appropriate car. Not all cars are unlocked automatically; you’ll need to complete one-off promo and challenge events to woo sponsors into hooking you up with the other ones. Don’t expect car collections on the level of Gran Turismo, however; GRID 2 features about 60 total. 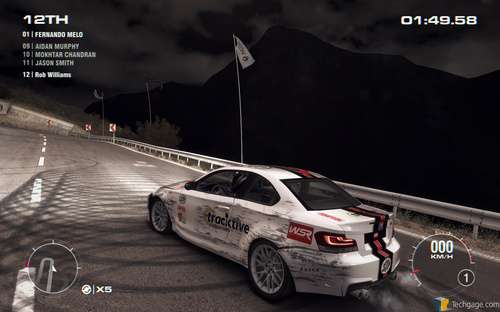 Burnouts? Yes, yes you can.

Despite the small collection of cars, Codemasters was sure to include some great ones. At the top-end, we have Bugatti’s Veyron Super Sport, a Mercedes-Benz SLR McLaren, McLaren F1 GT and Koenigsegg Agera R – just to mention a few. At the low-end you’ll find yourself in cars like a Volkswagen Golf, Ford Mustang, Dodge Charger, Mercedes-Benz 190E, and a car I found quite fun to drive, Nissan’s Fairlady Z. Overall, a great collection of cars (for a full list, I recommend looking here).