The idea behind the original Guild Wars was to deliver a fully realized world as big as, or bigger than, any subscription MMO without charging a monthly subscription fee. This was a new and ambitious idea at the time, and as fate would have it, Guild Wars went on to have 3 expansions and sold 6 million units of the core game – the gamble definitely paid off. Guild Wars 2 is yet another gamble, promising dynamic events, personal stories with unique backgrounds and much more content to experience inside of the Guild Wars universe.

Guild Wars 2‘s character creation gives you the option to choose from 5 different races; Asura, Human, Norn, Charr and the newest race Sylvari. All of which have their own unique starting area and race-dominant cities. The basic elements of changing your character’s features aren’t very robust but there is enough to change in order to look unique.

Professions come in 6 flavors; Engineer, Necromancer, Thief, Elementalist, Warrior, Ranger, Mesmer and Guardian. The traditional healer and buff/debuff profession are absent here; this is because every profession has its own unique set of skills that offer those abilities one way or another. 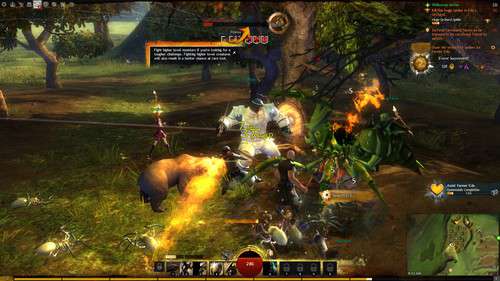 When the race and profession has been decided, you will move onto the personal story choices that will forever affect how the story is told for that particular character. There are 3 main story choices, each of which offers a few more additional choices to reflect how you feel the story should be told for him or her. An example would be if you were raised on the streets, with common folk or among royalty as a Human character. These options change between each race and the combinations will bring you to similar points of interest. The options you are given will change based on those 3 primary story choices, however.

During the course of the story missions you are given choices; you could either take a heavy-handed approach or you can take more of intellectually and possibly a role-playing approach – it could lead to combat, but not always. In one story mission, I choose to investigate a matter at a dinner party instead of searching a home; this gave me the opportunity to talk to the guests and role-play a little. I played the alternate choice with my brother and we found ourselves in a few battles, but my choice yielded no such battles.

At another point in the story I choose what seemed to be the role-playing choice, but there was still a battle. Again, I played the alternate choice with my brother and we were in the middle of a major battle. This illustrates how Guild Wars 2 has brought traditional single-player RPG elements closer to the world of MMOs and might have you going back to experience more of it, just to see how it might have played out if you chose something differently. 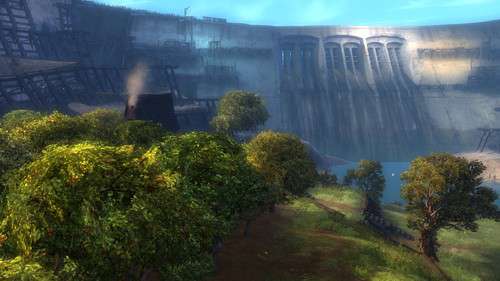 As mentioned before all of the races have their own starting areas, thus an Asura won’t face the same challenge a Charr would in their unique area. This is where you start your unique journey, but it isn’t very personal until you leave the starting area. The common thread between all of the race starting areas is the final event – all of them have it one way or another and afterwards you will be taken to the open world. All of the events are dynamic and they either happen at random intervals, by NPCs asking for help and telling you where to go, through direct actions made by players in a previous event or a side mission.

These events are everywhere in the world and participating in them will either earn you a Gold, Silver or Bronze medal. These medals will vary in experience, Karma and the Coin you earn. The medal you are awarded depends on several factors such as the amount of time spent in the event area, damage dealt to enemies and gathering of specific items you personally contribute to an NPC. The events are not restricted to those who started it, but are instead open to everyone who is passing by or can see it taking place on the map, ensuring you can get further help as it progresses and encourages you to explore each area thoroughly. 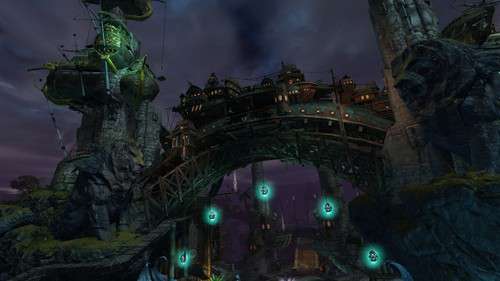 The personal story is given after you pass the starting area, but you don’t have to do them alone. While part of a group and following your personal story, no one can influence it – but if you enter combat, the difficulty of the opponents increases, sometimes drastically. There were times when my guild mates and I barely survived or died several times in these story instances, and I believe this to be a small balance issue. I personally would have liked the party to be allowed to give their input to my personal story or better yet, have guild-specific stories allowing everyone to make choices. This is something I was fond of in Star Wars: The Old Republic and for a game that encourages teaming up, I thought it would have been a logical choice to have something other than combat to bring us together.

While on your personal journey you will find that there are many areas to explore, all of which encourage exploration by way of points of interest, side missions, waypoints, vista viewpoints and the ability to earn extra skill points. The rewards offered are random and unique to each area in the way of weapons, crafting items, coin, special one-time use items, armor and upgrade items that are appropriate to level of the area.

The waypoints you find are extremely useful because you can later use them to quick travel. The amount to each waypoint varies with the distance but if you are in a major city area it costs nothing to use them while in the city limits. There are times when getting to these points will be difficult to get to, requiring you put your jumping skills to the test. There are even a few places where you will encounter a static hidden or random chest in an area. 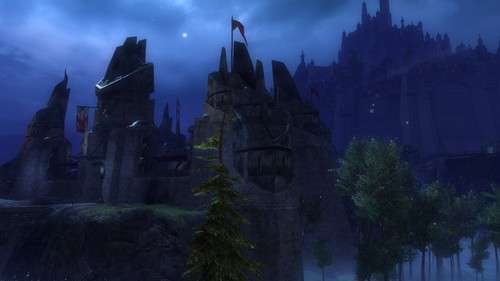 The side missions are scattered around many points of a given area, and the NPC who is offering it will be on your map as a heart. This is where you will earn most of your experience and karma throughout the game. The player doesn’t need to talk directly to the person offering the side mission; all you need to do is walk in their sphere of influence and it will pop up under your main story objective. When the side mission has been completed you will then have access to a unique store offered by each of these NPCs; items here are purchased with your karma points and not regular coin like the regular vendors.

There are eight types of currency in Guild Wars 2; Karma, Influence (Guild & Boon-specific), Gems (Black Lion Trading Company-specific), Glory (PvP-specific), Tokens (dungeon-specific), Skill Points (can be sold for crafting items), Supply (WvW-specific) and regular Coin. The Coin works as follows: 100 Copper gives you 1 Silver, 100 Silver gives you 1 Gold. The Coin currency will be used throughout the entire game, sometimes in combination with other currency. Those interested to know more about how Currency works in the game can head over to the official Guild Wars 2 wiki. 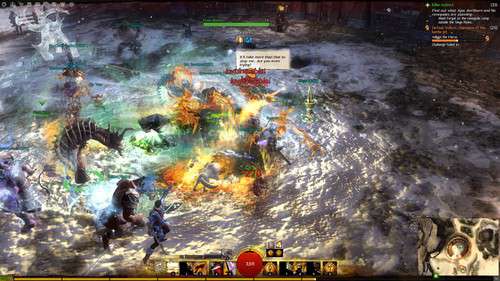 Professions you can choose from are Armorsmith, Artificer, Chef, Huntsman, Jeweler, Leatherworker, Tailor and Weaponsmith. The bank you use is shared between all of your characters and is limited to a certain number of slots, unless you purchase additional slots with gems; there is however a separate inventory tab just for crafting materials, which is also shared. This makes crafting less intrusive on your available inventory and easier to manage between multiple characters.