Crafting is very lopsided from what I can tell; you need a very generous amount of raw materials to craft items and then the crafting experience isn’t beneficial enough to take you to the next level of materials. I used all of the materials I had gathered in the beginning section for bronze items and still didn’t make enough experience to start crafting iron or silver in the next area.

Unless you have people willing to help you with little to no gain, crafting is going to be a real grind because Coin is very hard to come by starting off. I can see many people just blowing this off until they are either geared out to kill things quickly in the lower level areas, or have enough cash to buy raw materials at the auction house.

The overall gameplay of Guild Wars 2 is fluid and intuitive. The rigidity of having to use one weapon for your character is gone; here you can swap to any weapon your class can use with no investment of gold to learn it, and you gain the skills from making kills with each weapon. The only thing you have to pay Coin for is how many points you can put in your trait skills; these are used to increase your critical damage, strength, health and etc. 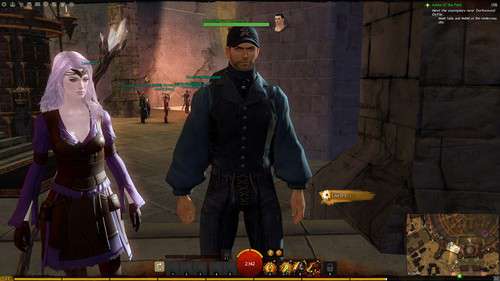 Guild Wars 2 will now lower your level to that particular area, therefore if you’re a level 30 helping a level 7 and are in a level 4 area, both of you will be leveled down to the max level allowed in that area, generally 2 levels above the beasts. This only affects your health and max damage; critical damage and skills are not affected. This is a fair balance for a game that encourages you to team up.

While you are teamed up with other people, your Influence gain for completing events and personal story are increased, providing more currency to your given guild. All guilds require a high amount of Influence to provide features such as a guild bank, bonuses to gathering/mining and so much more.

There are some basic features missing from the game that should be there, such as you can’t directly trade with another player. Instead, you have to mail everything. You also can’t inspect another player’s gear, and if someone is in a overflow area of a map you can’t find them on the world map – the latter could be a bug but it’s happened frequently to my friends and I. 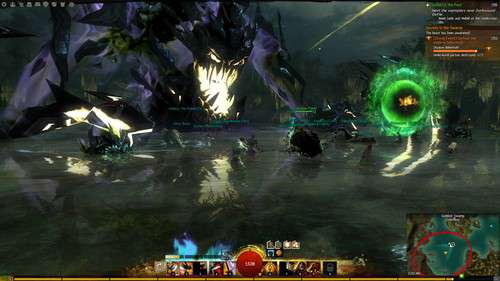 I would like to say that I appreciate how the dye system works; you don’t have to hunt down or buy the exact same dye for each piece of armor you wish to change, all you do is add it to your inventory and you can apply it to as many times as you want. A feature many veteran players of Guild Wars were looking forward to is the legacy system at the Hall of Monuments. This feature is however a hollow gesture, in my opinion. The reason is that all the rewards are cosmetic or give you legacy-only pets in Guild Wars 2 – and there is no bonus to using these cosmetic changes or unique pets. This is a feature that had all of us Guild Wars veterans excited, but turned out to be a disappointment.

That aside, the death system is greatly appreciated and balanced. When you run out of life, you go down and have the chance to fight to survive to rally or heal yourself slowly to the point where you get back up and bring yourself back with around 10% health. This is sped up with the help of other players of any profession who can revive you and the more people helping, the better your chance of getting up much quicker. If the unthinkable happens and you do perish completely, you have to teleport back a town waypoint and repair one piece of armor for a small price. 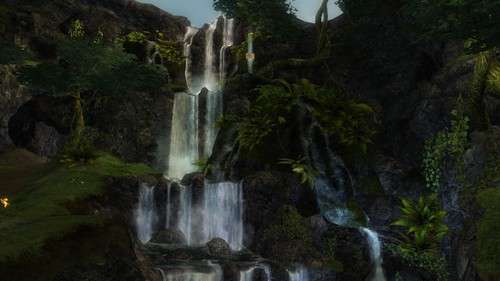 The Player vs Player (PvP) is well balanced and I didn’t notice any particular class dominating another, so this is something they obviously spent a lot of time working on. The maps I played on were small and fast paced, but in World vs World (WvW) they are open and take time to get to the action, then it gets hectic. There are bonuses to be gained from WvW such as gathering and mining, crafting for certain professions, Coin drops and more.

I mentioned before about the Black Lion Trading Company; this in-game group only takes Gems for purchases. These Gems can be earned via two methods; either real-world cash or by exchanging Coin at a certain exchange rate (gems can also be exchanged into Coin, again at a certain and different exchange rate). The Black Lion Trading Company can be accessed anywhere in the world, so you can always purchase something no matter where you are.

The Black Lion Trading Company also run the world’s auction house, but if you need to pick up your profits you will need to talk to a representative in a city or in certain towns. The establishment is run independently from the primary game server, thus it has a tendency to be down for maintenance or experience severe load times. This has progressively gotten better since launch, but there are still random problems that pop up from time to time. 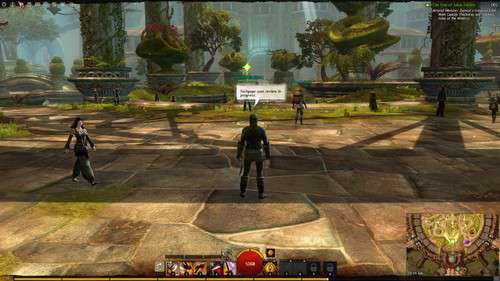 Guild Wars 2‘s connectivity certainly is stable; I have only been disconnected 3 times because of the game server not responding. This is saying something for a game that is supporting well over a million players since launch. A frequent audio bug I run into is related to my 5.1 speaker setup; such as I would hear the start of a NPC conversation from across the street as if I was standing right next to them, but the next person to talk would sound like they are actually across the street! The same thing happens to world sounds as well. This is very annoying because they sometimes don’t stop, so I hear the area sound the entire time I’m around it until I leave it.

The music and sound effects are all well done; the music has a fantasy feel and when in a major battle the effects are clear and vibrant. The only problem I had with audio (aside from the bug) was the voice acting, not all of the dialogue is voiced and much of it is rehashed over and over.

The graphics are gorgeous, especially the particle effects from magic and area-of-effect skills. I have only two nitpicky complaints, the first: all the woman look young even if they are described as old, and second: how one texture meets another, such as a sidewalk meeting a group of stairs; one can look brighter than the other or the color can be drastically different. A frequent video bug I run into occurs when I go up stairs or an incline and almost all of the textures will disappear; turning the camera pops the missing textures back but if I go back, the same textures will disappear again.

I am very disappointed to report that Guild Wars 2 does not officially support multi-monitor resolutions. The character creation and cut scenes are completely broken, even when using third party tool like Flawless Widescreen to fix many of the other visual issues like the HUD. This is something Arena Net could have easily included, especially since the original Guild Wars has no trouble with multi-monitor resolutions. 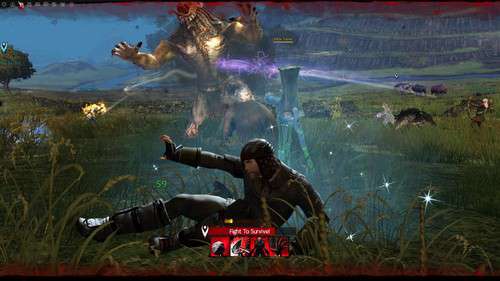 To get the best possible performance out of the game, I recommend you use an SSD to run it from. There are many different variations of armor, clothing and color that would stress a regular HDD and this will cause a drastic drop in your frame rate. Techgage’s own Rob Williams put up a video illustrating the advantages of using a SSD in “Lineage II – Hard Drive (HDD) vs. Solid-State Drive (SSD)“. This video is almost a carbon copy of the performance difference I experienced when playing Guild Wars 2 on a HDD and then on my SSD.

In the end, Guild Wars 2 is one the best subscription-free MMOs I’ve played yet. I think Arena Net achieved many of the goals it was aiming for and pulled its ideas off extremely well. But, nothing feels new, except for where the personal story is concerned. I do get the feeling that some things were left behind or not fully explored and there could have been much more than what is here; I hope to see a little more risk in the way of original game play and more guild-centered story. Until then, Guild Wars 2 is a great game if you are looking for largely familiar but fine-tuned features, but without the subscription fee.