The seventh HOPE conference was held this past weekend in NYC and I was there to take in the numerous talks. Such subjects covered were lock picking, Wikipedia’s evils, YouTube, FOIA, hardware hacking and a lot more. Special talks were also given by Steven Rambam, Steven Levy, Adam Savage and Jello Biafra.

This past weekend, ‘The Last HOPE’ conference was held in the heart of New York City, at the legendary Hotel Pennsylvania. ‘HOPE’ of course stands for ‘Hackers on Planet Earth’, this latest iteration being the seventh, and also supposedly the ‘last’. The conference first launched in 1994 and proceeded to become a bi-annual affair in 2000. All but one conference was held at Hotel Penn, so over the years, the hotel itself has become an integral part of what makes HOPE the conference it is.

The back story is that the hotel was announced to be demolished in the near future, with the goal to build in its place a new office building (huge surprise there). Thanks to this, the future of HOPE was very uncertain, and so the ‘The Last HOPE’ moniker came about.

The problem up to the conference was that the 2600 staff remained incredibly vague with regards to HOPE’s real future. Even on a recent airing of one of Emmanuel Goldstein’s radio shows, Off the Wall, he remained entirely vague during a discussion with a fellow station host. While he did come out and state ‘facts’ that “last” means “last”, his conclusions were difficult to settle upon. After all, Emmanuel is a master of playing with words.

But I digress. When the show finally did begin, on Friday, it seemed like no time had passed before it was Sunday evening and we were celebrating the closing ceremonies. During the opening remarks, we were asked to remain silent for a few moments out of respect. After all, given that this was ‘The Last HOPE’, it would also likely be the last time most people in the room would have set foot inside the legendary NYC hotel.

Cue funeral anthems and out of nowhere come a handful of grim-faced pallbearers carrying a black-painted casket, which I assume said HOPE on it, but was unable to see clearly. At this point, most, if not everyone, had believed that this was indeed the last HOPE. To make matters even worse, I had heard from a fellow attendee earlier in the day that he heard from a friend that Emmanuel was indeed tired of handling the conferences, so it was time to shut things down.

The last speech was given by Emmanuel, who went on to speak a bit about the English language. He also apologized for not being entirely clear with his points in months past. To be more clear, he proceeded to show foils of a slide that showed ‘Last’ means ‘Final’… done. The room was near-silent, and I am confident I wasn’t the only attendee hit with an abrupt realization that this was indeed the final HOPE.

But he continued. Though not verbatim, Emmanuel said something to the effect that, “English words can take on other meanings, as well. Such as…” [cue comic] ‘Hi, were you at the last HOPE conference?’ … ‘Yes, I was, and I’ll be at the next one as well.’

At that point, he called up a website called ‘http://thenexthope.org‘ and in a few short nanoseconds, everyone in the room began cheering and clapping profusely. Indeed, the entire 2600 crew, among anyone else who knew of the conference’s true fate, was misleading thousands of people for many months. Talk about the ultimate hack!

Before I jump into brief reports on the conference itself, I should make sure that everyone reading this understands what a ‘hacker’ really is, since it’s not something I’ve discussed much at all on the site in the past. Prior to being introduced to a certain MMORPG game (Asheron’s Call) and then followed by beginning this website, hacking was my primary hobby. Due to lack of time in recent years, I haven’t delved much into anything hacking-related, except in small increments.

Contrary to what the mainstream media would like you to believe, the term ‘hacker’ is a broad one, and in no way implies a person who is up to no good. In fact, most people at the HOPE conference are the exact opposite of these stereotypes. They are white hat hackers interested in investigating anything and everything to see how it all works. This is contrary to the typical black hat who use their skills for malicious intent. Many ‘hackers’, including myself, have done some less-than-reputable things in our past, but that’s what happens when you are young and incredibly naive. Most people can say that though, about anything, hacking or not. 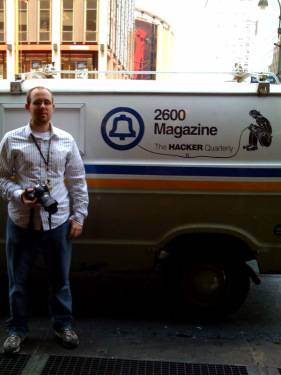 (Thanks to Alex for snapping this photo.)

Since most of the ‘hackers’ that the press portray are actually cracking into systems for personal gain, whether it be to earn cash in the end or just cause trouble, they should be considered ‘crackers’. ‘Hacker’ simply shouldn’t be used as a filler word, because it’s so inaccurate in the way it’s been used over the past few decades.

‘Hacker’ can be used to describe someone who performed an absolutely simple hack, to someone who really knows what they are doing and circumvent their own computers security features. If you edit a hidden .ini file on your Windows machines to alter some functionality, that’s hacking. If you reverse engineer an application on your machine, it’s still hacking. Hacking can take on a billion different forms, but the point is, ‘hacker’ should not be the term used to automatically label a real criminal. It’s foolish and only shows how inept some of the press actually are.

That all aside, I’m confident that many reading this are either hackers or want to call themselves one, so I may very-well be preaching to the choir. Just do your part. If you talk to someone who has the wrong understanding of what a ‘hacker’ is, set ’em straight!

In this short article, I’ll cover a few of the talks I saw while at the conference. Given the sheer size of the event though, and the fact that there were well over 100 different talks, I was only able to attend a handful, about twenty. So while I will speak about a few here that I was enthralled with, there were likely many others that I was unable to see, due to other talks occurring at the same time. With that said, read on!