Finally, a 64-Bit version of Half-Life 2! Is there any reason to get excited about this, or is it something you just want to bypass? We take both versions through a few quick tests to see if the 64-Bit has what it takes to be the preferred version.


To benchmark both versions, I used both the Canals level from Half-Life, and also used the tech demo Lost Coast. I recorded the frames per second with FRAPS. I tested using the stress test in Lost Coast also, but grabbed the results from it rather than FRAPS. 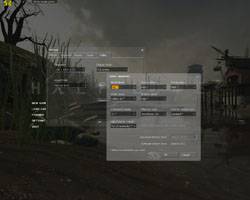 The game was run at the same resolution and detail level in both versions: 1280*1024 @ 4xAA and 16xAF. You can see further detail settings in the picture above. In each version of Windows, all unnecessary services and applications were closed, including Virus Scanners and Firewall’s.

The first test was going through the entire canals_07 map, which takes approximately 4:30 minutes. The Lost Coast Stress Test was run also, proceeded by a run-through that lasted 10 minutes. 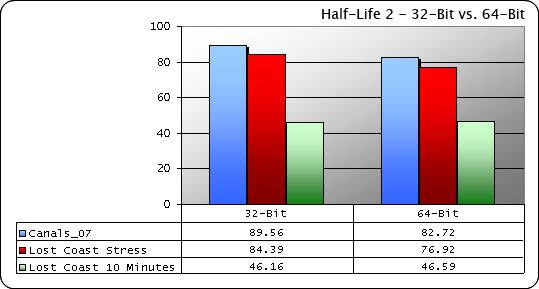 Surprisingly enough, I didn’t see an ounce of benefit from the 64-Bit. The 32-Bit had better overall frame rates than the 64-Bit. I was a bit confused by this, because in our article from June, I found better overall FPS while running the 32-Bit version of the game in x64. I look forward to other benchmarks around the web in the days to come to see if my results turn out to be similar to others. I would certainly hope that a native 64-Bit wouldn’t take away your FPS.

Where a 64-Bit version could be beneficial is with load times. In each OS, the levels mentioned below were opened up in the same order, and timed with a stopwatch but rounded off to the nearest second. The timer was stopped as soon as I could see the graphics in the given level.

As we can see, the 64-Bit actually was faster in almost all instances throughout each test. It was a staggering 16 seconds faster loading the Canals level in x64! All of these times were re-tested and proved accurate on my machine.

As per requests, I re-ran all the tests in low resolution as opposed to the maxed out settings I was using before. This time, 640*480 was selected, and each setting was set as low as it could go. HDR was disabled in Lost Coast for these tests. 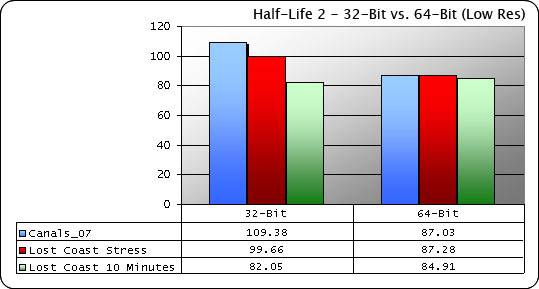 Sadly, 64-Bit could not even muster enough to keep up to it’s smaller brother. The only advantage it had was in the Lost Coast single player run, and even that’s hardly an advantage. 32-Bit proved to be 22FPS faster than the 64-Bit version.. ouch.

Admittedly, this was by no means an intensive test. But these quick run-throughs can give a good idea of whether 64-Bit is anything to really get excited about yet. Sadly, I was expecting better performance in 64-Bit but was left dissapointed. I would rather play the 32-Bit version where I saw better FPS than have slightly faster load times. As mentioned in the previous section, I am looking quite forward to checking out what other people are benchmarking both of these versions at. I do not own an FX processor, but that’s the CPU they are pushing in their Press Release, so is it expected that the FX may be the only CPU where a performance increase will be seen?

If you are a gamer wanting the best experience, I would hold off from downloading the 64-Bit version unless x64 is your only OS. Not only does the 64-Bit version hold back FPS, at least in my case, it’s quite buggy at this point. For all I know, some of the bugs may be responsible for holding back the FPS… I guess we will know soon enough when they fix up the bugs.

If you have any rants about the 64-Bit version, assuming you have used it, feel free to send me an e-mail and I can stick a quote in the end of the article. Or, feel free to include your comments in our related thread. You do not need to register to post in our content threads.

Bruce writes: I have just read your article concerning 64 bit HL2 and as you have stated I can confirm that the water in the 32 bit does look like your published picture. This is not a driver issue, with either detonator or catalyst but is in fact a strange side effect of the 64 bit upgrade.

It is my belief and that of some others on the steampowered forums, that some sort of update was applied to the 32 bit version when the 64 bit version was released. As a concequence of this update the water seen in the 32bit version is now as you see it.