One of the key reasons why Half-Life 2 did so well on the market was due to it’s tight gameplay. Valve made sure to give fans the experience they want in the new installment. The general gameplay hasn’t changed at all, so you will be able to jump in and enjoy the game right away. Because this is a stand-alone game though, you will first have to reconfigure your keyboard and mouse settings, in addition to the graphics.

If you enjoyed the commentary feature from Lost Coast, you are in luck. It’s back in Episode 1 and there are many nodes throughout the game. It’s recommended you play through first without them, so as to not take away from the gameplay. Chances are good that you will want to go through the game a second time, so the commentary nodes would be a perfect addition then. 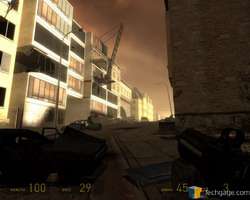 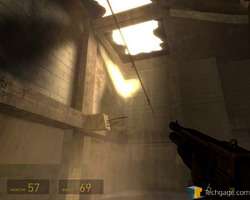 Because the game starts off immediately where Half-Life 2 left us, I had originally believed that G-Man would be the first thing we see. Instead, you are under a bunch of rubble and rescued by your good friends Alyx and Dog. Yes, that loveable mechanical beast is back! Your travel with him doesn’t last very long, however. Surprisingly, you begin off not with a crowbar or a pistol, but your energy gun. It won’t be until you are a quarter of the way through the game that you will finally acquire different weapons. Surprisingly though, no weapon from HL2 is missing here.

One complaint about the previous game was that even though you had numerous friends throughout the game, you always ended up going through solo. As an example, there were parts where Alyx would meet up with you, and then run up ahead of you to ‘flip a switch’ or perform some other mundane task. Valve didn’t want this to happen again with Episode 1, and Alyx is by your side virtually 80% of the way through. If you are worried that this will suck the fun out of the game, don’t worry. It turns out to be very enjoyable, and adds an element of strategy.

It’s not simply a matter of Alyx following you around, but she helps save your butt. The character AI is superb, and that’s important since she will be by your side often. In various points in the game, it’s imperative that you help each other to get things done. Just like it states at the end of the second teaser trailer, “Alyx. She doesn’t have a crowbar, but she’s got your back.” 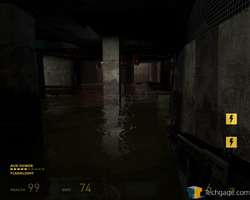 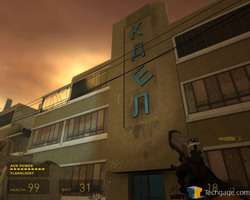 You don’t want to take advantage of her devotion to keep you alive though, because she will eventually die due to your carelessness. It seems as though she has far more health than you do, but that shouldn’t hold you back from watching her back. For an offline game, EP1 does a great job with the team play element.

Episode 1 improves on the first games puzzle elements, and may actually require you to get your brain kick started occasionally. Some of the more elaborate puzzles are coupled with monsters trying to kill you. It can get quite exciting at times, to say the least. Though puzzles can sometimes be less fun than getting a root canal, Alyx will be there to help you complete most of them. As odd as that may sound now, it does add to the joy of completing them.

Sadly, you will not be hopping in a dune buggy or powerboat this time around. There is likely to be vehicles in the later episodes, but in this one there is just no need. 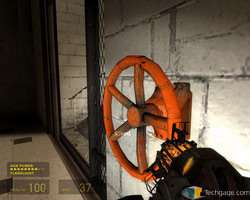 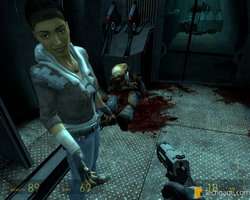 As everyone had anticipated, the gameplay is as solid as can be. The smaller additions in Episode 1, such as puzzle solving and teamwork adds much to the experience, and the entire episode comes together seamlessly. There is not one part of the gameplay that I can speak bad of, it’s near perfect.

The sound quality that we received in Half-Life 2 is back in full force. Many of the sounds you hear in EP1 are recycled from HL2, but they are some new ones. One thing that I personally liked about HL2, were the parts of the game that had music add. Not only was it well done, it added a lot to the excitement. Well, this music is back and even more prevalent.

You will encounter a lot of the same baddies you took care of in HL2, but their sounds haven’t changed. The weapon sounds haven’t changed either, but really they didn’t need to be. Ahh.. the voiceover’s! There are many of them in the game, especially from Alyx. She is not afraid to speak her mind, or grunt loudly while trying to push a zombie away.

Overall, the sound is extremely well done. If you have a 5.1 speaker setup, your ears will -love- you.