Though it’s been over 18 months since Half-Life 2 has been released, the graphics have not had any sort of overhaul. Despite some aspects of the graphics to be slightly outdated, they are still impressive overall. Since Episode 1 is more of an extension than a new game, it was designed to still work on machines as well as HL2 did.

The main addition to the source engine for use in Episode 1 is HDR, or High Dynamic Range. HDR is a special rendering of light that’s designed to give off a far more realistic outcome than with previous methods. One popular way of giving HDR examples is to picture a sun, and the way it naturally reflects light off of everything. As we seen with the Lost Coast demo, the easiest way to show a difference with and without HDR, was straight from the drop spot. 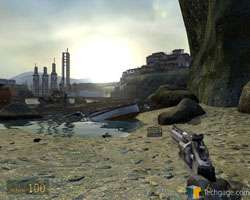 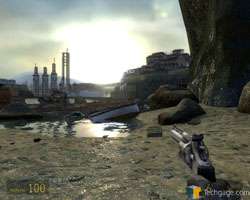 Looking at the screenshot’s above, you can see the immediate difference between using HDR and disabling it. Not only does the sun shine realistically off the water, there is also a realistic shine on the wet mountain and ground in front of you. Undeniably, HDR is a great feature to add to a game, so thanks to Valve for finally implementing it into Half-Life. 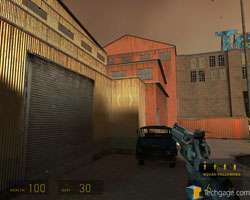 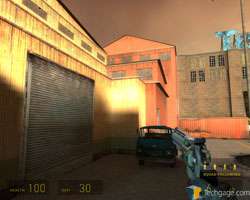 Some areas in the game are like night and day if you have HDR enabled. As you can see by the above shots, the difference is clear. Like in Lost Coast, the HDR acts realistically to real eyesight. Once you look directly at a wall that’s lit up by the sun, it will adjust to your virtual eyes. So if it’s bright at first, once your ‘virtual eyes’ gain focus, it will be easier to look at. If you have played DoD: Source, you can expect similar HDR effects.

Other areas that the engine has amped up are particle effects and motion blur. The character animation is much more refined also, which pays off since Alyx is by your side constantly. She walks and runs far more realistically than in HL2. The actual character models have not changed at all though. 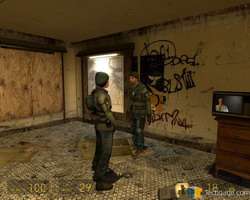 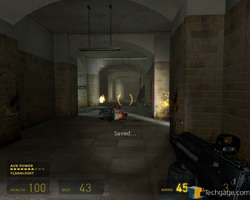 Since the graphics have been amped up overall, you can expect this to become the replacement for HL2 and Lost Coast benchmarks that we see now. In order to give you a general idea of the performance you can expect with Episode 1, I have benchmarked using two different resolutions, with and without HDR, using the d1_c17_02a level.

For some comparison purposes, I ran the same tests using d3_c17_12 level from Half-Life 2, which has similar elements to the new level tested in Episode 1. Since HDR is not available in Half-Life 2, it will undeniably have higher FPS on average.

The testing system includes an AMD 3200+ Venice at 2.8GHZ using the DFI Ultra-D motherboard. The Corsair 3500LL PRO 2GB kit was used, at 280MHz, using 3-3-2-0 timings. The video card is an eVGA 7800GT with a 445MHz core clock and a 1.07GHz memory clock. The NVIDIA 84.21 drivers were used, under a dedicated Windows installation. The average FPS were gathered using FRAPS, and the results listed are that of a full 5 minute run. 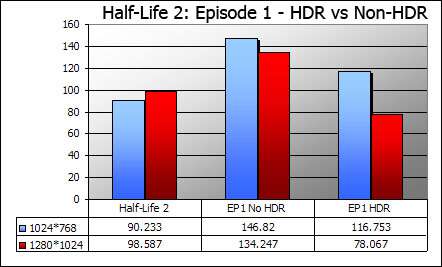 As we expected, the average FPS was lower in Episode 1, but still proved quite good for this stand alone card. Turning off HDR made quite a difference on the average FPS. If you can use HDR and still have 60FPS, I would recommend keeping it enabled.