Hard Reset isn’t a complex game, if you haven’t guessed already. Progression is almost entirely linear, though there are many secrets to be found throughout, should you enjoy exploring and finding every last piece of N.A.N.O. – the more N.A.N.O. you pick up, the faster you can upgrade your abilities.

Despite its simple design, the game encourages you to play through the game multiple times in a couple of different ways. First, you are graded at the end of each level to see how much of a completionist or skillful player you are. The “Total Points” score is compiled by considering your number of kills, how many you killed by way of the environment (blowing things up), damage done, secrets found and so forth.

The other way the developers encourage at least a second playthrough is by opening up an EX Mode after you complete the game for the first time. This simply starts you over from the beginning at the same difficulty level, but retains all of your upgrades, allowing you to go through the game again and by the end acquire every upgrade in the game. Past this, achievement hounds will have fun replaying the game at the highest difficulties, as Flying Wild Hog awards a total of four separate achievements for most things – based on the difficulty. 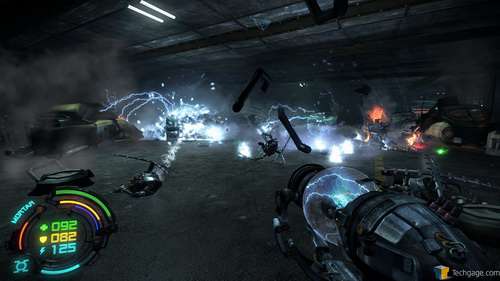 The replayability factor for this game is important, because while it does cost only $30 at this point in time, it’s hard to feel satisfied after a mere 5 hours of game time – and that assumes you die every so often. If the game had a quick save option, the game woudl have taken me only 4-and-a-half hours to complete. It’s without question the shortest FPS game I’ve ever played through.

What’s interesting about Hard Reset is that while it’s a $30 game, it looks like a $60 game. It offers some mind-blowing graphics that will run just fine on most recent machines, has some great audio (ambiance is excellent), and is in general a visual treat. It’s a dark game as you can tell, but at the same time there’s lots of colors in the UI, ammo drops, billboards and other things. I never thought a cyberpunk world could look so pretty. 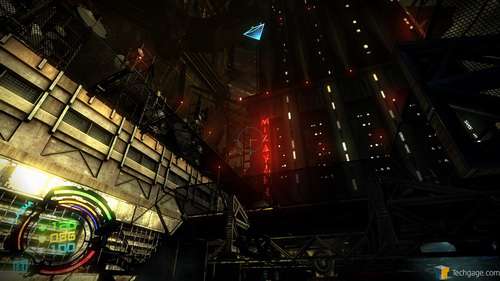 Being that this game is so exciting in terms of graphics and gameplay, I hate to refer to this as an indie title, but it is. There are some things that prove it throughout, such as overused textures. In one example, there’s a small area that has three near-identical “FISH” shacks. It’s things like this that kind of cheapen what’s otherwise a stellar presentation.

A couple of other factors confuse me as well though, including the inability to crouch. When is the last time you played an FPS that wouldn’t allow you to crouch? Could it have been the original Doom? In another example, I passed onto an area where there was no going back. But I wanted to go back to get some more ammo, and even though there’s a huge opening in the fence, I was unable to get back through since I couldn’t crouch. 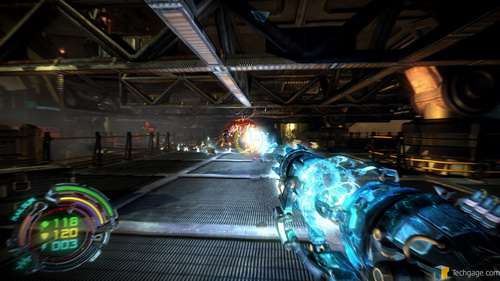 There are also a fair number of areas in the game where you can’t pass because of a hidden barrier – even though you are indeed able to get to the area ahead via an alternate route. There were times when I either tried to hop or a fence or jump over a road barrier that looked like it could be jumped over, only to be blocked.

On the topic of graphics again, a common sentiment I’ve seen around the Web about the game is that a lot of it looks alike, and, well, it’s true. This hit me the hardest when I went to throw a bunch of screenshots I took in to a folder and noticed the trend. Of course, I couldn’t help but draw up some comparisons. Below are my screenshot folders for four games, Hard Reset, Duke Nukem Forever, The Witcher and Deus Ex: Human Revolution. What you’ll notice is that while the latter three have great variation throughout, much of Hard Reset looks the same. 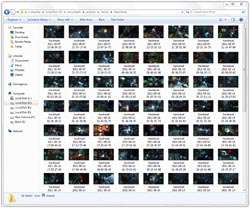 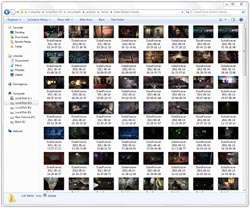 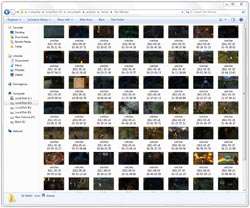 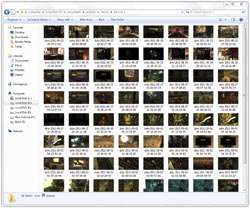 This isn’t a bad thing, per se. What matters is that the game is fun, and it is. It just become so clear that there is a lack of variation with the game that I felt compelled to mention it. On the upside, Hard Reset, despite its common graphics throughout, offers some of the most interesting level design I’ve ever seen. Most of the levels in fact take place in one central area, but you may spend a half an hour going from point A to point B. There were points where near the end of a level, I could see near the start of the level – it seems simple, but it’s creative.

If Hard Reset is one thing, it’s fun. Those who like action-packed FPS titles, look no further. This is about as action-packed as a game could get. It offers the action of a Serious Sam but has a much darker tone. The music is good, voice acting mediocre, but ambiance excellent. The graphics are also some of the best I’ve ever seen in a game. There’s no DX11 here, but Flying Wild Hog has proven that they know how to take full advantage of DX9.

Past all that, the game is about as tight control-wise as it gets. It reminds me a lot of Unreal Tournament in that it supports twitch gamers, even though that style isn’t required. Movement for the most part is quite good, and aiming fluid – just how it should be. 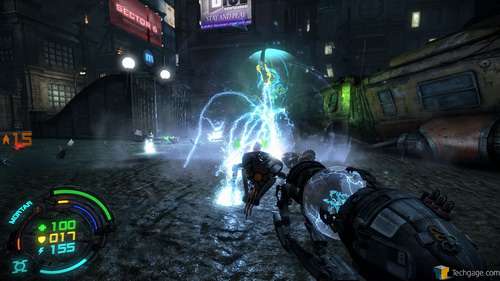 There’s no one major complaint I have about the game, but rather just a bunch of minor ones that seemed to add up. The overuse of certain textures was a little off-putting, for example, while the inability to crouch still boggles my mind. The impassable hidden barriers I can let slide, and the same goes for the story. After a while, the story became so dull to me that I just skipped all the cutscenes. I wanted back in action, not to try to piece together a story that sounds similar to a million others.

None of those things are game-breaking, however. In the end, Hard Reset is a blast to play, is extremely challenging, offers outstanding graphics and control, has a great level design and is sure to get your adrenaline pumping on multiple occasions. If you don’t mind the fact that the game can be beat in 5 hours, it’s well worth a look.

I am hoping Hard Reset sells well, because after playing through it, I cannot wait to see what else Flying Wild Hog has up its sleeves.