When we took a look at Hiper’s Anubis chassis just over a year ago, we were quite impressed, to say the least. For a company that seemed to come out of nowhere, their first offering was robust, well-designed, and feature-packed. We of course had high hopes when we received their follow-up Osiris. Does it live up to our expectations?

When on the market for a new chassis, Hiper isn’t necessarily a company that rushes to the front of many builders’ minds. Our first experience with Hiper came when we reviewed their Anubis mid-tower a year ago. In that review, we were impressed with its design, its rigid durability and the overall build quality. Using the conventional method of drawing in cooler air from the front of the case and expelling it out the back and top, the Anubis put out very respectable thermal numbers.

Setting itself apart from the pack though was the huge aluminum heat sink that ran the entire length of the top of the case. While the thermal assistance that this provided was certainly questionable, the look that it gave the case did separate it from the pack of mid-towers that are all pretty much the same thing.

Offering far more than cases, Hiper sells awarded power supplies, keyboards, fans, cables and multimedia hardware (I’m actually using a set of HDMI cables for my PS3 and PC that are needlessly thick but work quite well). I am also using the Anubis as my full time workstation chassis at home so when their latest offering, the Osiris showed up for testing, I called dibs and began to put it through it’s paces.

Lacking the large heat sink on top and a door on the front, the Osiris is an open face mid-tower offering hidden drive bays and the same 120mm front fan as the Anubis. When placed side by side, the overall build quality of the Osiris matches that of the Anubis. Using the same style of quick-off side panel as the Anubis, Hiper has made the Osiris just as easily accessible and from a profile prospective, the two cases look identical. Hiper has moved the power supply to the bottom of the case, added a 120mm filtered opening as well to allow the PSU to breath. From there, the differences are small. 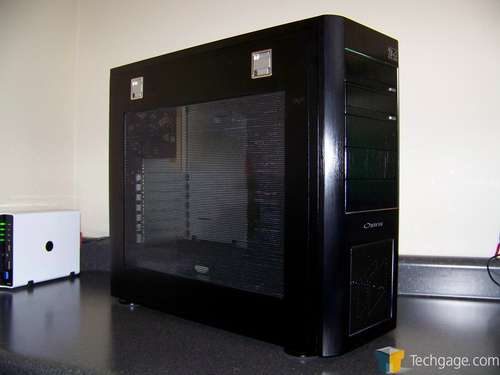 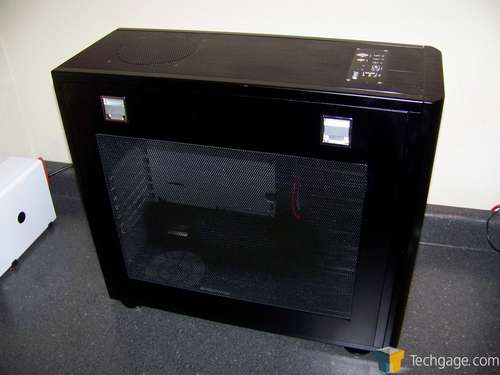 The front of the Osiris, as mentioned earlier, is an open face chassis, lacking the door that we saw on the Anubis. There is metal grill with the Hiper logo stamped into it at the bottom to allow a 120mm fan that sits behind it to pull in cooler air from the front of the case and into the chassis. The top 2/3s of the case has five 5.25″ drive bays with the top two offering spring-loaded doors to hide any optical drive that might reside behind them.

Surrounding both the grill and the drive bays is a silver bezel that adds a bit to the overall appearance of the case (though I could personally do without the lettering below the drive bays and the hieroglyphs in the upper right hand corner.) 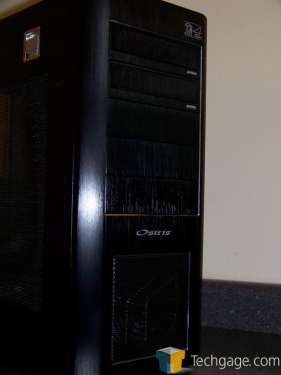 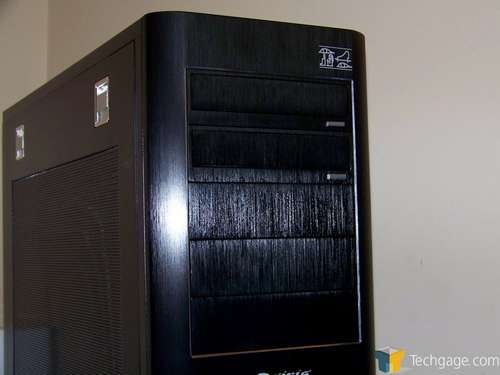 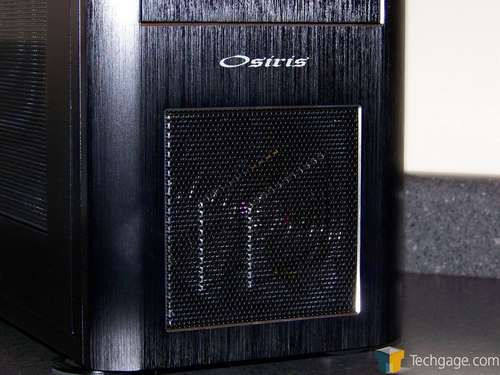 The back of the Osiris offers the standard seven PCI slots, a 120mm fan and a bottom mounted power supply opening. The entire motherboard area of the case is thin-stamped aluminum that contrasts sharply with the rest of the black case. While this isn’t anything different than almost every other chassis on the market today, it is something that I would love to see disappear.

I can mostly deal with the silver, but with thin aluminum strips, if you tighten your PCI slot screws too tightly (very easy to do), it can become stripped. Then you’re stuck not using that slot at all, or rethreading it with a larger screw, and then try not to repeat the same mistake again. Like the Anubis, there is a pair or rubber-covered holes that can accommodate up to ½” diameter tubing for those of you that like to keep your thermals in check with water. 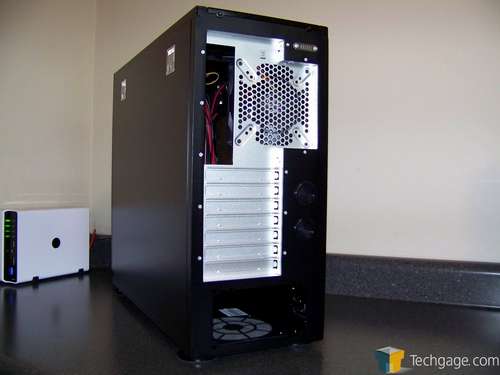 By placing the power supply at the bottom of the chassis, Hiper has solved a minor problem of allowing the PSU to breath. Most power supplies use one large fan, usually 120mm, to pull in cooler air and move it across the heat sinks on its way out the back. This is a problem in some cases as the fan sits only a few millimeters away from the bottom of the chassis. To remedy this, Hiper has placed a 120mm opening, covered by a filter, to allow cool outside air into the power supply instead of pulling in warmer internal air. 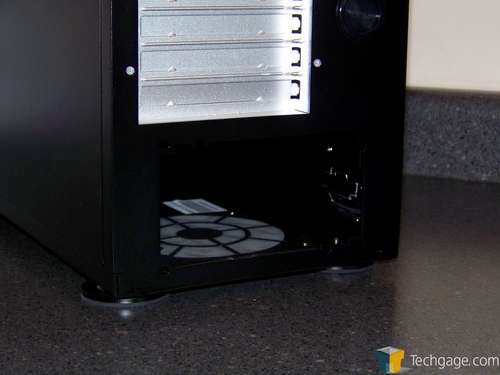 Another thing that carried over from the Anubis is the individual unit number. While kind of gimmicky, this is a neat extra that not a lot of companies offer, and to sweeten the deal, Hiper includes an Osiris keychain with matching number. 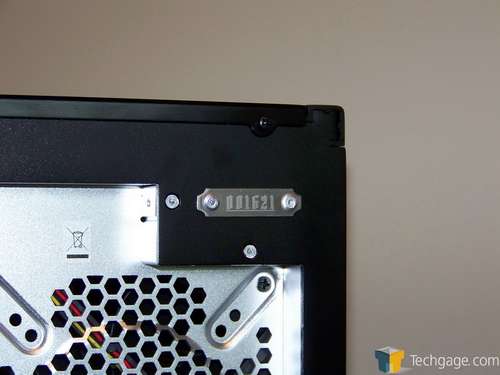 The right side of the Osiris is rather plain, as are most cases, but it does include the same type of latches that allow easy access to the underside of the motherboard tray. This is the side of the case that rarely get’s opened by anyone, but the way that the Osiris is designed, to remove the hard drive tray, you need to access it from both sides. Having a door this easy to remove is wonderful. 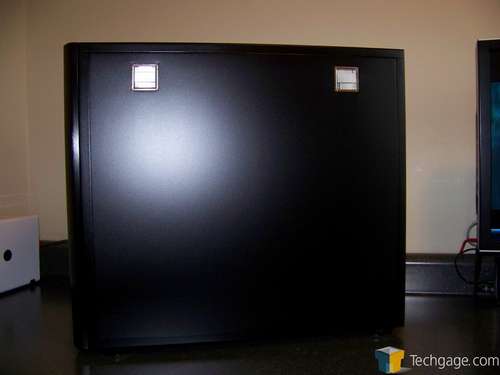 We have seen the latches on the side panels that make them so easy to remove but on the interior, we see the spring loaded clamps that hold tight to the bottom of the chassis for a snug fit every time. Each side panel has a pair of these and they do a great job in holding the door in place. 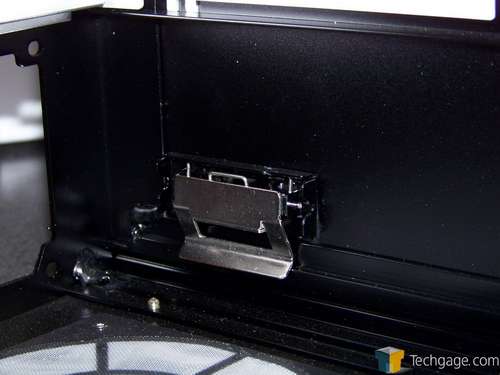 Back is the top mounted I/O ports, but different from the Anubis is the inclusion of an eSATA port. Joining the eSATA is a pair of USB 2.0 ports, audio in and out, microphone, a reset and power button, as well as brilliant blue and purple LEDs for the hard drive and power respectively. 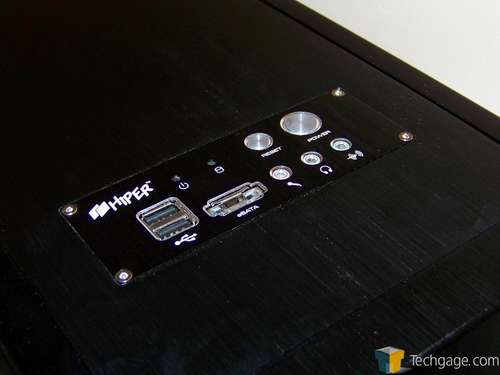 Next up, a look at the interior.