Note: This page was written on 11/16/07 as a response to a newer sample that was received. Pages 2 and 3 are from the original review.

We here at Techgage, recognize that flawed products happen, a bad production run, damage in shipping, or just human error can cause a device to not function as intended. 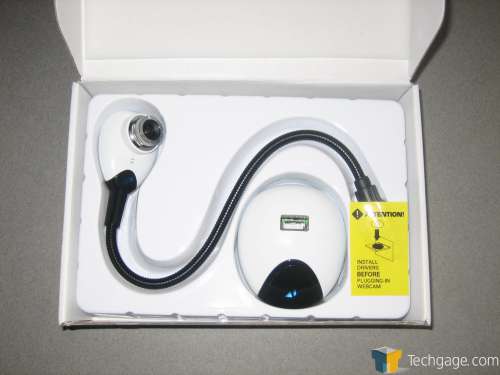 A lot can be said for a company that cares about how their products are presented. Shortly after the initial review for Clique’s HUE Webcam was posted the product management division of Clique Communications contacted us, expressing concern that the item received was obviously and unacceptably flawed. They have since sent me a replacement webcam and update software, and so I am adding an addendum to the previous review with the new camera and software details.

The drivers are now updated, and the software is in version 1.1, a .1 step up from last time. There were no Windows Logo verification testing issues this time, which is nice. I understand it’s not critical, but error free installation is always a positive sign. The visual look of the installation software itself has not changed, however allowing the app to take you to Clique’s product site, does so in a browser that is not your default browser. 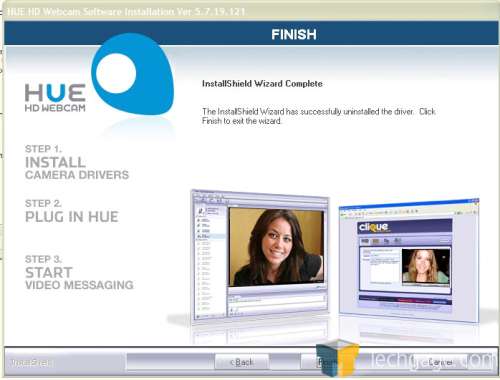 Now something I completely did not notice the first time around, was Clique’s Greetings, which is a web based communication portal, integrating your webcam, and allowing you to send a video greeting. This does not appear to allow real time chat.

The reason I missed this the first time around, is any time installation software asks if I want to view the company website, the answer is no, because chances are I’ve already been there or I wouldn’t have downloaded or purchased their software.

Minimum system requirements for the site:

So lets try this with AMCap again. Success! Narf! (Sorry having those two nearby does something strange to me.) 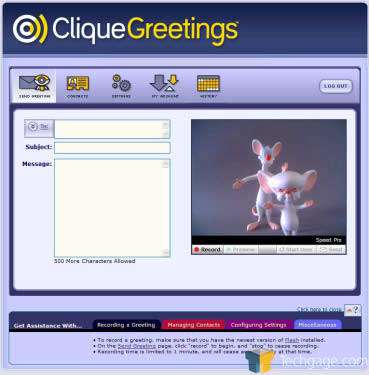 Now we have a comparable image available. This camera shows absolutely no signs of the lens flaws that caused little bright spots to appear on the images produced by the previous version. (Pinky really does have eyeballs, they’re just hidden behind his nose.) The focus adjustment is smooth and the image is relatively clear. As stated earlier, production errors can occur and the issues with the previous camera lens were obviously a production line defect and not representative of the intended quality of the product. 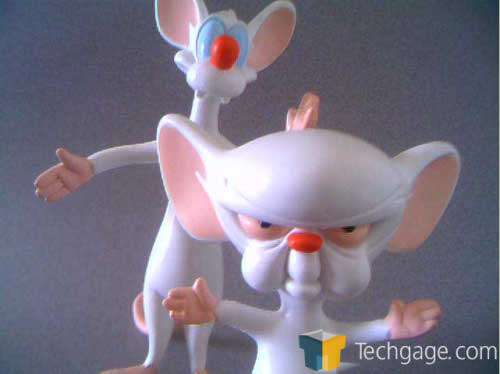 Note: This image is a little blurry due to compression.

Now another issue I had with the previous version had to do with the stiffness of the ‘neck’. Let’s address that. If you recall, I previously attached the old camera to my monitor, and with dismay and some hilarity, watched as it drooped to faceplant onto my desk.

Here goes! I’m plugging it in now… and… wow, it held position without issue. It didn’t even waver a millimetre! Several positions tested and they all appeared to hold, I was able to move the camera towards me without fail, up down, you name it, it held its position. I have to admit, I’m surprised. Initially feeling the ‘bendiness’ of the two cameras, this one did not feel any different but its performance says otherwise. I was completely unable to attain any of these positions with the previous and apparently defective one. 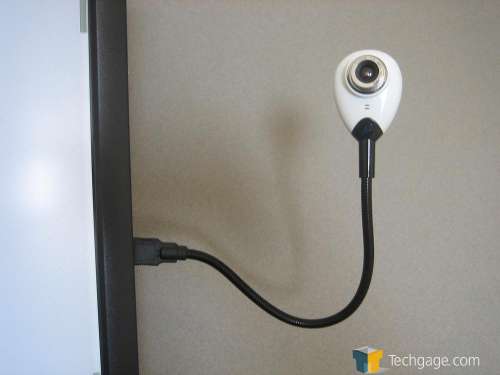 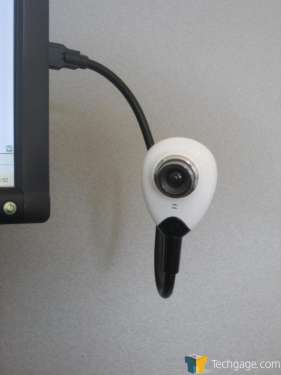 And lastly, how does this hold up in its base? I still think the base itself is under-weighted, both weighing in at approximately 22grams (my scale is analog not digital but they appear to weigh the same amount). The following image shows the absolute extreme I could push the newer camera neck. (Even then it fell about half a second after I snapped the pic.)

In an extreme example, if you were to attempt suspend this camera from a shelf above your PC, you’d simply need a single ‘sticky dot’ to ensure it did not come crashing down on to your keyboard, but as mentioned that would be extreme. Most users are going to sit this beside their monitor (or plug it into their monitor or laptop) and use the neck to adjust for a perfect picture of themselves. It allows for quite a bit of tweaking to get yourself or your subject centred vertically and horizontally, and that’s worth mentioning. 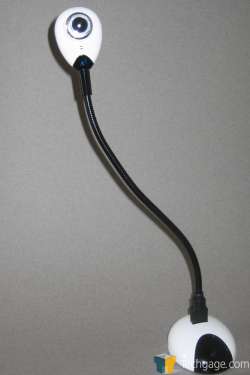 I’d like to thank Ray Minchew, Director – Product Management for addressing the concerns we had about this product and allowing us to review an item that is more representative of the final product as intended. This tells me that the company cares about their products and the people who use them.

Previously I rated this webcam as follows:

With an overall average rounding up to 6/10.

Knowing now that the product I initially reviewed was manufacturally flawed, and having reviewed a production release of this camera that is more representative of the cameras on the market, those ratings have obviously improved.

With an overall rating of 8/10, adding bonus marks for the care and concern shown by the company.

I’d still like to see a heavier base but overall this product is much better than initially reported, and while we still have the original review for you to read, please know that I gave this new camera a fair chance, putting it through the same tests as the previous product and found significant improvements.