In most other notebook reviews, I’d be able to dedicate a lot of the article to look at the included software and also perform some light gaming benchmarks, but both of those are impossible to do here. The notebook is not designed for gaming (a given), nor does it include a lot of software. That is a great thing, however. One common complaint from people who purchase a new notebook is the pre-installed bloatware. You will not find that here.

When I first booted up and saw an empty desktop, I contacted Hypersonic again to make sure I wasn’t seeing things. I had assumed that I received a bloatware-free notebook due to it being a sample, but that wasn’t the case at all. I was told that they have no agreements with anyone to include bloatware (or shovelware), nor do they have plans in the future. 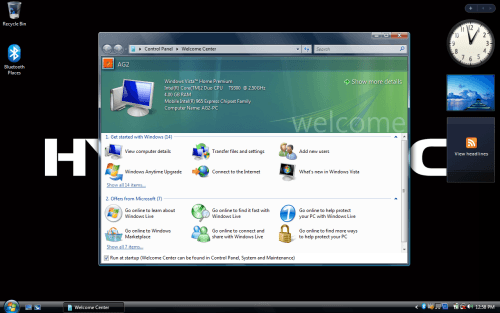 So how am I to fill up half a page about software when there is none?! What I will talk about instead is the installation process in general, which was simple. Once Vista is installed (which takes around 30 minutes), it takes 10 minutes more to install the drivers off of the CD. I liked the fact that both XP and Vista drivers were included, instead of making people go to the website for the XP versions, like other companies do.

I received somewhat of an odd sample, since I received it with 4GB of RAM on a 32-bit OS. This means that only 3.0GB can be accessed at any time due to technical restrictions. This is a problem that no one else will face though, as you will be able to choose either a 32-bit or 64-bit OS and also the correct amount of memory.

If you do happen to go the 32-bit route initially, but decide you want more memory in the future, you will be able to use a Vista 64-bit installation disc (not included) to reinstall a fresh copy, using the serial key included with the notebook. This is a scenario I tested out, as I used the 64-bit version for testing.

Unlike most other notebook manufacturers, Hypersonic allows you the choice to receive the notebook sans an OS, which will decrease the system price overall.

The latest version of Ubuntu and Kubuntu came out around the time I received the notebook, so I had to give it a good test and see how the notebook performed there. Well, I have to say that I was actually blown away by how well Linux worked here. I’ve been quick to discredit Ubuntu in the past, but it’s come a long way and you’d swear it was built for this notebook. 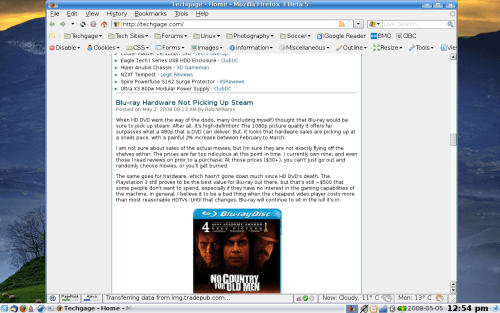 Everything worked after installation. You can see the Bluetooth and WiFi in the dock, both working just fine. But it didn’t end there. The memory card reader worked, something I’ve had problems configuring manually in Linux in the past. The web cam, audio, video and everything else worked fine also. I was impressed. I also have to mention that the font rendering is the best I’ve seen, and it looks great on this small display. So if Linux happens to be your preferred OS, you won’t be disappointed.

Hands on with the AG2

As I mentioned on the first page, this is the first sub-notebook I’ve used, and with it came a definite learning curve. The only real difficult thing, however, was using the keyboard. It has to be smaller to fit, and as a result, each key is smaller than what my fingers were used to. After a few weeks of use, I can say I’ve gotten a lot better at typing on it, but I am still not perfect.

If you were forced with the notebook for a weekend, you’d likely come out a pro. Posture has a lot to do with it I find. If I’m slouching, I tend to hit the wrong keys constantly, but if I sit up straight (like I should be), then typing is far easier. The main key I had problem with was the period, which is smaller than most of the other keys available. Due to space constraints, I can understand why it’s smaller, but it doesn’t stop me from wishing it was a wee bit bigger.

The more I used the notebook though, the more I came to love it. It handles all tasks well (thanks in part to it’s huge processor and copious amounts of ram) and it’s reliable in the process. One area of note is the WiFi, which I found to be rock stable. To test this, I run a script that automatically refreshes a web page each minute, and if I come back to the machine to find out that it failed one time, it means the network kicked out. I run the test alongside the same test on a wired computer to make sure it wasn’t the actual network.

Most notebooks I’ve used recently do tend to kick off rather frequently, but not here though. It kicked out once in a 24-hour period, which impressed me greatly, primarily because I have an unreliable network to begin with. Somehow it managed to keep a very strong signal. This could have been by chance (as in, the network was pristine for that duration), but in all the testing, I never had it kick off once while using it. 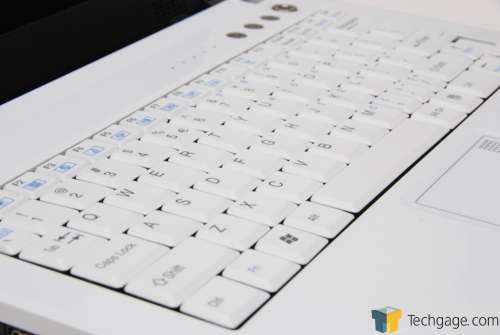 What I don’t like is hard to figure out. The notebook itself doesn’t have the style and charm of something that the likes of Dell would offer, but the AG2 focuses on performance and functionality, not looks and design. Because most of the surface is barren, you are able to add a design if it suits you, whether it be some sort of engraving (not sure about that on plastic though) or a collection of stickers to show the world just how punk you are.

I personally would have liked to have seen a DVI port instead of the VGA, but I know I’m in the minority. Most prefer VGA as they only have one monitor, or a monitor with only one DVI port, which is being used by their desktop. So this is understandable, and depending on the monitor, a VGA connection will look just fine.

As you’d expect, the speakers are some of the weakest I’ve ever heard, and I’m pretty sure I could build something more advanced with a hanger wire and Styrofoam cups, but then again, that would be much larger than what can fit inside this display.

The web cam also wasn’t highly impressive, but I have yet to find one on a notebook that is. Unless you have a bulky external offering, like Logitech’s QuickCam Pro 9000, you are either going to have a very low resolution output, or one that’s jerky. The latter describes this one, but it will certainly manage in a bind, or for quick shots of yourself in very inappropriate poses.

Overall, I don’t have serious complaints about the AG2. There are a few things I wish were improved, but I’ll tackle those in the final thoughts on the next page. It’s a notebook clean of bloatware with an emphasis on performance. Hard to not like that.