With so many headsets available that are specifically designed for gamers, it makes it difficult to choose the right one. We are taking a look at the IceMat Black Siberia, based off the original Siberia that has been given countless awards. Let’s jump right in and take a fresh look at this cool product!

Around this time last year, IceMat released their original Siberia headset, which was pearl white in color, with some black details. It won many awards because of the superb audio quality and comfort level. Because of reviews I have already read of the headset, I knew in advance that this was a great product. The only difference between this headset and the original is the color. After the original was released, many gamers requested that they release a black version, and they listened!

IceMat is owned and run by Soft Trading, who also handles SteelPad’s inventory. They first came onto the scene in 2001 when they released their IceMat, a mouse pad made from glass. From that point forward, they became known as a company who delivered quality products to gamers. With the release of the IceMat Siberia, they became a trusted name to gamers. 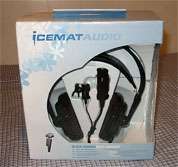 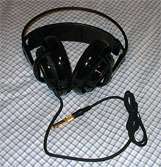 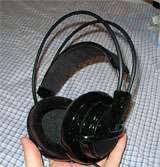 Without a doubt, this is one of the most unique headsets on the market. In fact, it’s almost not even a headset, because the headphones and microphone are completely separate pieces. This will allow you to not have the microphone near you, when you don’t need it. Personally though, I prefer to have the classic microphone design, but this works.

At first look, the headset may be cheap looking. One of my friends actually made the comment that it looked like it was missing pieces, and that it can’t be that sturdy. Heck, one could compare it to a thong. Sure, it has considerably less material than regular underwear, but what’s there is enough to do the job.

That’s the last time I ever make a comparison like that ever. With the headset though, in this case, *wearing is believing*. As soon as I put the headphones one, I had a “Wow” feeling. These are the most comfortable headphones I have ever worn. First, let’s get into the specifics. Here are the technical specs for the headset, for you audiophiles.